Netanyahu multiplies efforts for Likud to be the biggest party

Prime Minister Benjamin Netanyahu chalked up a major victory in convincing Zehut leader Moshe Feiglin to take his party out of the running for the Sept. 17 election. 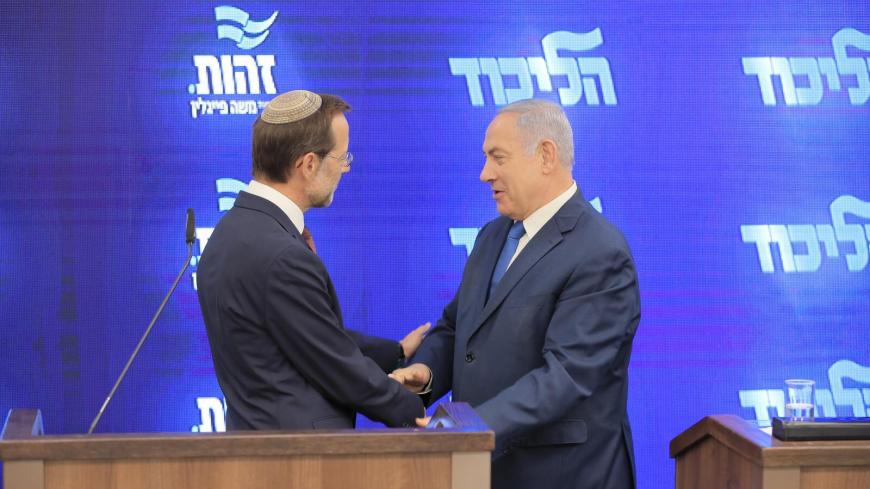 Up until yesterday, Zehut Chairman Moshe Feiglin had been the person most courted by Prime Minister Benjamin Netanyahu this campaign season. Netanyahu invited Feiglin for hours of private talks at his official residence. He called him. He showered Feiglin with attention in a way only Netanyahu can when he has an interest in them for his own personal reasons. All the attention paid off. Feiglin finally surrendered, and on Aug. 29 he and Netanyahu stood side by side at a Tel Aviv news conference savoring the moment. They reminisced about their past as enemies and celebrated their new friendship.

Netanyahu spoke first, announcing that Feiglin would be given a ministerial portfolio according to the agreement between their two parties. He also said that when the Knesset reconvenes after the Sept. 17 Knesset elections, a reform would be adopted to allow the import of medical marijuana, a Feiglin pet project. In exchange, Zehut will not contest the elections. When Feiglin spoke, he sounded almost in love, recounting that in his long talks with Netanyahu, he had discovered that they share the same economic worldview of the free market.

The Likud-Zehut agreement is important for Netanyahu in reducing some of the risks ahead in the tough battle that awaits him on Sept. 17. With Zehut out of the running, some potential Zehut voters, most of them young people who identify with the right, will vote for the Likud, while the remainder will support some other right-wing party. All in all, the votes won’t be wasted.

Politics works in mysterious ways. For years, Netanyahu tried to kick Feiglin out of the Likud, claiming that his extreme right-wing views, which bordered on messianism, were scaring away voters and losing the party crucial seats. Feiglin had built a significant base of support in the party’s official institutions, however, and was in no hurry to step aside for Netanyahu. On the eve of the 2009 election, Netanyahu tried to appeal to more centrist voters in the party by threatening Likud Knesset members that they might lose their chance at being promoted to minister if they cooperated with Feiglin. That demonstrates how serious he considered the damage caused by Feiglin to be.

In January 2015, Feiglin finally gave up. After being shunted to an unrealistic slot on Likud's list, he announced that he was quitting the party and forming a movement of his own. He accused Netanyahu of trying to eliminate him politically.

Round two in the battle took place a decade later, on the eve of the April 2019 election, with the movement Feiglin had founded emerging as Zehut, gaining traction and fans. Although Feiglin failed to get into the Knesset, winning only 2.74% of the vote (with a vote threshold of 3.25%), his tally represented two seats at the least, with most of Zehut's voters identified with the right. That might not seem like a lot, but it is critical to Netanyahu in his fight to win 61 seats to establish a majority coalition with the right wing and the ultra-Orthodox without relying on Avigdor Liberman’s Yisrael Beitenu. His goal is to turn the Likud into the single biggest party, his competitor for the title being the Blue and White. If Netanyahu succeeds, his path to the Prime Minister’s Office is assured. If he fails, he could go into a tailspin and crash land.

Netanyahu is a man with a purpose. That has always been his default. With less than three weeks left until the election, Feiglin and his supporters were Netanyahu's most important target. Obviously Feiglin is taking a big risk. In signing the agreement and taking Zehut out of the race, he has put his fate in Netanyahu’s hands. The prime minister might well keep up his side of their agreement, but he could just as easily abandon it. Netanyahu has quite a history of sidelining people and breaking promises.

“Netanyahu did not let go of Feiglin,” a Likud minister told Al-Monitor, speaking on the condition of anonymity. “He was blind to anything else. It was the most important thing to him.” With Feiglin won over, Netanyahu is one step closer to the coveted 61 seats and increasing the Likud’s strength. He still, however, has to make major advances with other communities.

More challenging is his appeal to Russian-speaking voters, the sector where Liberman currently reigns. Polls indicate that Liberman has managed to siphon off two seats from the Likud and Moshe Kahlon’s allied Kulanu. He is also grabbing votes from Blue and White and parties on the left. Netanyahu does not believe Liberman will be able to attract additional right-wing voters because he is flirting with the center-left and working openly to replace him. Nevertheless, Netanyahu’s efforts to hurt Liberman thus far have failed. Yisrael Beitenu has remained steady, polling at an estimated 9 to 10 seats.

Netanyahu, after his appearance with Feiglin, made his way to Bat Yam for a big gathering of Russian-speaking Likud activists. The city is home to a large community of immigrants from Russia. Knesset Speaker Yuli Edelstein (Likud) got the crowd worked up with a speech in Russian, and it soon became clear that Liberman was the target of the evening. Netanyahu accused him of being determined to bring down his right-wing government. “Anyone who wants me as prime minister must vote Likud and Likud only,” Netanyahu told those assembled.

His message stems from in-depth polling. Most of the Russian-speaking community has right-wing views, and Liberman and Netanyahu are their favorite politicians. When Liberman announced before the April election that he would recommend Netanyahu to form the next government, he made it easier for voters to support him. After all, they believed that Netanyahu would again be prime minister. If this equation no longer holds — and Israeli Russian voters are not certain to get Netanyahu as prime minister if they vote for Liberman — then everything changes. If Liberman makes it possible for Blue and White Chairman Benny Gantz to form the next government, then the vote of Israeli Russians might be less predictable.

Netanyahu believes that by pushing the message that Liberman has joined forces with the left, he can win back at least one of the seats that Liberman will likely take from Likud and Kulanu. If he succeeds, it will get him a little closer to his target of 61. No less important is his goal of ensuring that the Likud is Israel’s biggest party.

Netanyahu’s other front involves stealing votes from the parties to the right of the Likud, particularly supporters of Yamina (Rightward), headed by former Justice Minister Ayelet Shaked. This is considerably easier for him. According to polls, Yamina is currently hovering around 10 seats, so there is no fear that it will fail to pass the electoral threshold, thus leaving Netanyahu to act freely and explain to voters again and again that the right’s hold on power is threatened and that only a big Likud can prevent the left from forming the next government. This has always worked in the past, and there is no reason to believe that it will not work again. It actually looks like Yamina leaders Shaked and Naftali Bennett are not even fighting against it anymore. A source considered close to Shaked told Al-Monitor on the condition of anonymity, “I think Ayelet Shaked realizes that her party will end up with 7-8 seats.”

Netanyahu has already begun courting settlers and the ideological right. He paid a visit to the right-wing settlement stronghold of Beit El on Aug. 8 and laid the foundation for a new neighborhood with 650 housing units. “Our mission is to establish the Jewish people in its land and to ensure our sovereignty in our historical homeland,” he said.

From now until the next election, Netanyahu is expected to skip back and forth between the settlements and major centers of Russian immigrants. He will overturn every stone and stoop to pick up every single vote until the polls close on the night of Sept. 17.