The head of the Zehut party, Moshe Feiglin, is a gifted politician: He advances Libertarian principles and legalization of cannabis while concealing his ambitions for a Jewish State law that would expel Arabs and annex the West Bank and Gaza. 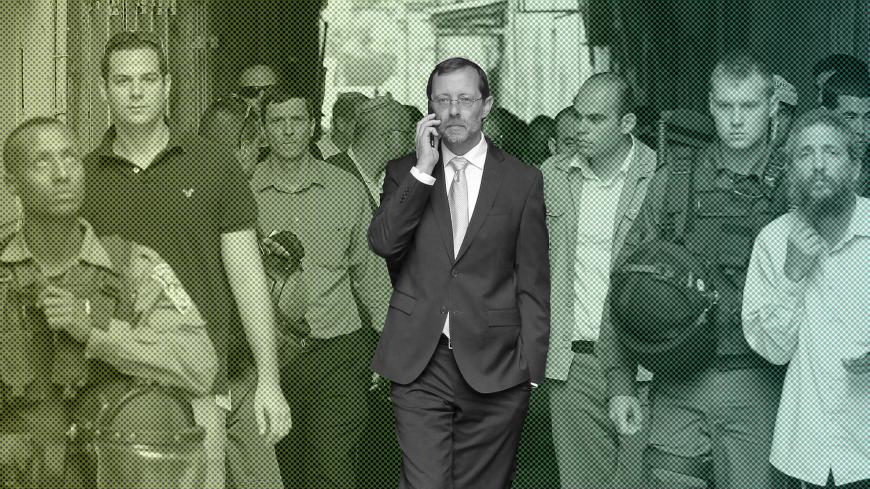 Far-right member of the Knesset Moshe Feiglin (C) speaks on the phone while walking in the Old City of Jerusalem, Nov. 2, 2014. - AHMAD GHARABLI/AFP/Getty Images

At a time when political parties, such as Finance Minister Moshe Kahlon’s Kulanu, Avigdor Liberman’s Yisrael Beitenu and in some polls even Meretz, are treading water around the vote threshold of four Knesset mandates, one new party that is not currently represented in the Knesset seems to be drawing the support of a growing public. Polls, despite their drawbacks and lack of accuracy, lately point toward the possibility of an election surprise and project Moshe Feiglin’s Zehut party would win at least four mandates. In one poll, he even reaches seven mandates.

Zehut has an extremist right-wing platform that includes, among other items, canceling the Oslo Accord; annexing all Palestinian territories as well as the Gaza Strip; deportation of Palestinians who oppose this; and granting residency status to Palestinians who openly declare loyalty to the state. Pledging allegiance to Israel should accord the Palestinian residence with civil rights such as the right for property and human rights in general, but no right to vote for the Knesset. Another status would be accorded to those interested in serving in the army, like the Druze or the Bedouins. According to Zehut’s platform, they would go through a process of proving their loyalty to the state. Only after that would they receive full citizenship. According to Feiglin, the state’s institutions should function according to Jewish religious law, and the Chief Rabbinate should manage the Temple Mount. Despite all this, Zehut has many supporters on the left.

Feiglin debuted on the public scene with his This Is Our Land movement that he founded in 1994, which opposed the Oslo Accord with nonviolent protests. His sharp political sense led him into the Likud in 2000 in order to transform and influence the party from within. The change the Likud has undergone in the past decade — from liberal right sympathetic to Jewish tradition to super-conservative with ultra-Orthodox leanings on matters of religion and state — attests to the fact that Feiglin succeeded.

Feiglin had run twice for the leadership of the Likud and was elected to the Knesset once in 2013. But he decided to quit the party when in the Likud primaries of 2015 he was elected to an unrealistic spot. When he left, he established “Zehut — an Israeli Jewish Movement.” The key tenets of the party seem to include an internal contradiction: On the one hand, it calls for a state that returns most of the freedoms to citizens, defends the values of the family and the community, and upholds a free market; on the other hand, it calls for a state that realizes and strengthens its sovereignty over all the land, starting with Jerusalem and the Temple Mount, and aims to end the situation of conflict and bloodletting by defeating Israel’s enemies. “The Land of Israel belongs only to the Jewish people by virtue of divine election,” Feiglin asserts.

Here is another example of the internal contradiction: The platform speaks of canceling religious coercion — such as in marriage registration — but on the other hand greatly deepens the involvement of religion in the state according to the principle that “the state’s official institutions must be committed to Jewish law and the heritage of Israel.” According to Feiglin, Orthodox Jewish law should determine conversion (invalidating conversions by progressive-Judaism rabbis). A Jew who is not considered as such according to Orthodox Jewish law — for instance, a person born to a Jewish father but not to a Jewish mother — could immigrate to Israel but would receive the status of resident instead of citizen.

On the economic side, Zehut’s platform is rife with clauses based on libertarian and free market principles like the privatization of the education and health systems, canceling the biometric database and its erasure, and granting the possibility of carrying guns to nearly every citizen. This aspect winks at supporters of the distinctly liberal stream in Israel, who ignore the diplomatic and religious elements of the Zehut platform.

One of the main banners of Zehut — at least for the media — that draws many supporters from the liberal stream and otherwise to Feiglin is the legalization of cannabis. According to Zehut’s platform, the use of cannabis and its components, their noncommercial cultivation, and their possession or acquisition would be allowed by law. The decision of the Green Leaf Party — which pioneered for years the campaign to legalize soft drugs — not to run in the coming election sent its 47,000 supporters (number of votes gathered in the 2015 elections) into Feiglin’s arms.

Netanyahu held a question and answer session March 11 on his private news network, Likud-TV, on Facebook. One of the questions dealt with legalization. He answered thus: “I advanced several changes in this area. We increased the use of medical cannabis; we brought Israel to one of the highest levels in the world. Second, I’ve been told there’s a global market so I allowed growers to cultivate it and turn it into a significant export for the State of Israel. I am now looking into the topic of legalization, and I will give you an answer soon.”

Netanyahu sees Feiglin, who is extremely right wing, as a potential partner in a future coalition. Since Zehut garners quite a few votes according to the polls — especially from center-left voters interested in the legalization of soft drugs — Netanyahu’s response has encouraged Feiglin in making the topic of legalization legitimate and essential in current political discourse. Left-wing parties Labor and Meretz, which have emphasized that they support legalization and even thought of it before Zehut, have reinforced this analysis. Moshe Kahlon also announced that he would act to cancel the criminal record of anyone who had previously used cannabis, while Orly Levy-Abekasis announced that as health minister she would work to effectively distribute medical cannabis.

Some argue that legalization is meant to cover for Feiglin’s true platform, conservatism in liberal clothing. Dr. Gail Talshir of the political science department at Hebrew University tells Al-Monitor that as Feiglin sees the public sphere, religious Judaism is dominant and democracy has virtually no significance. She views the legalization of cannabis as a green fig leaf behind which hides a state governed by Jewish law that is not democratic.

In order to portray a serious image, Feiglin added to his party list people known in their domains. No. 2 is Rabbi Haim Amsalem (formerly of the Shas movement), considered an ardent opposer of religious coercion. No. 3 is Gilad Alper, a well-known businessman and economist. Dr. Ronit Dror, an expert of family and welfare and a known social activist, was also added to the list.

Feiglin himself explains to Al-Monitor that there is no contradiction between liberal values of justice and equality and the reoccupation of all Palestinian territory, including the Gaza Strip, and the imposition of Israeli sovereignty. “The Palestinians in the Gaza Strip received their full national rights over the territory, but since then the human rights situation has deteriorated under the Palestinian Authority and then Hamas,” he said. He thinks that any liberal who loves humanity should be shocked at the trampling of Palestinian rights by their own governments. The vision, according to Feiglin, is “to turn Gaza into [the Israeli city of] Jaffa and not the opposite.”

Feiglin admits that his campaign focuses on civil issues from legalization to a liberal market and leaves the diplomatic and security issues backstage. On April 9, after the votes are counted, we’ll see if Feiglin succeeds in bringing an extremist right-wing party into the Knesset with the help of voters from the left.