It was only when he needed the Zehut party for electoral reasons that Prime Minister Benjamin Netanyahu ''remembered'' the thousands of patients needing cannabis for medical reasons. 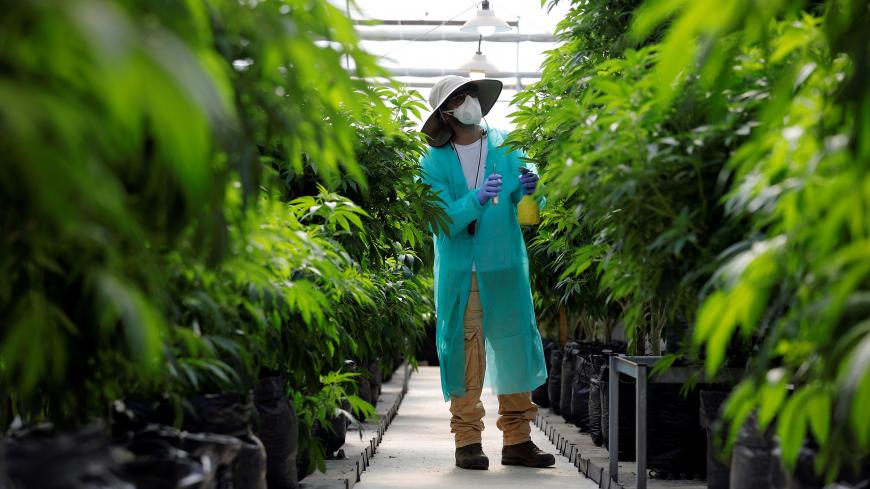 “I thank the party members who today gave sweeping approval [by a vote of 1,165 in favor, 319 against] to the agreement I signed with the prime minister,” declared the chair of the small Zehut party, Moshe Feiglin, on Sept. 1. “God willing, the decision made today will lead to implementation of the Zehut platform by the government and the Knesset.”

The deal Feiglin reached with Prime Minister Benjamin Netanyahu includes a promise to promote the libertarian underpinnings of the party’s ideology regarding a free economy, media, human and civil rights; reduced cost of living; formulation of a clear policy on immigration and border infiltration; improved services for Jews worshipping on the Temple Mount; equal law enforcement of all planning and zoning laws; and reduced regulation and transparency in statutory corporations.

However, the icing on the cake was undoubtedly the legalization of cannabis for medical use. At his joint news conference with Feiglin, Netanyahu spoke of the plight of “tens of thousands of sick who need medical cannabis, who deserve it and can’t get it; their need must be fulfilled." The prime minister promised to table a law legalizing medical cannabis for Knesset approval.

The chair of the Committee on Drug and Alcohol Abuse, Knesset member Tamar Zandberg of the left-wing Democratic Camp, told Al-Monitor in response that everything Feiglin had promised regarding medical cannabis, Deputy Health Minister Yaakov Litzman had promised four years ago, and the situation has been deteriorating since. “The promise to import cannabis is also nonsense,” Zandberg added. “There is nowhere from which to import because very few countries export cannabis. On the contrary, there is demand for exports from Israel, but the government refuses to approve it.”

At the committee’s last session in December 2018, Zandberg said 42,000 patients had been suffering for years from a systemic failure of the medical cannabis supply. “We have been discussing these issues for over 3½ years,” she said at the meeting, “and we keep hearing the same things [from the government].” A cancer patient told the committee that he owed his life to cannabis. “At your next meeting, you will observe a moment of silence for me,” he lashed out at representatives of the establishment. Zandberg wrapped up the meeting with an announcement that she would convene an emergency session with the health minister and the director general of his office to present them with all the committee had heard. “I want to see how the Health Ministry carries out its commitments to its patients,” she said. “You have simply failed. You are sitting on top of a volcano.”

What has changed over the past eight months for the cancer and Parkinson’s patients crying out for help? Was it the Aug. 15 Channel 13 report about Yedidya — an epileptic child whose desperate mother exposed him to the cameras as he sat convulsing at a playground — that brought the distress of the 42,000 patients to the prime minister’s attention? Or, perhaps, was his sudden concern for their suffering linked to the 118,031 ballots cast for Zehut in the April election and the fear that they would be lost to the right-wing bloc if Zehut fails to get sufficient votes on Sept. 17 to make it into the Knesset? Presumably, if the payback for Zehut’s agreement to drop from the race was, for example, a government commitment to increase the benefits of the elderly crushed by the poverty line, we would have found a commitment in the agreement to ease their distress.

When Feiglin said the agreement with Netanyahu “would lead to implementation of the Zehut platform by the government and the Knesset,” he did not mention the cannabis, which has been a flagship issue of his political career. An analytical segmentation of his voters in the April election showed that the vast majority live in West Bank settlements, which is the biggest pool of right-wing voters. They are attracted more to the territorial section of the platform that Feiglin pledges to promote from within the next Netanyahu government (in which Netanyahu has promised him a seat). This chapter calls to impose Israeli sovereignty on “Judea and Samaria” (the biblical names of the West Bank). To avoid any misunderstanding, he added, “Not autonomy, not a quasi-state, not sovereignty only in Area C of the West Bank and not any other partial plan.”

The chapter about imposing Israeli sovereignty on all the territories Israel has occupied since the 1967 war, which has become the bon ton of the political discourse in right-wing pro-settlement circles, does not appear in writing in Zehut’s agreement with Netanyahu’s Likud party. There is probably a limit to how much fun can be made at the expense of US President Donald Trump’s “deal of the century” for Israeli-Palestinian peace (annexing the West Bank might not be compatible with Trump’s deal). However, to ensure that Feiglin’s supporters do not stay home on Sept. 17, after "wasting" their ballots in April and now having no party to call their own, Netanyahu has an oral fallback to the written word. Addressing first graders on Sept. 1 at the settlement of Elkana to mark the start of the school year, Netanyahu declared, “With God’s help, we will apply Jewish sovereignty over all communities as part of the Land of Israel and the State of Israel.” He also vowed, “We will not uproot anyone here. There will be no more Gush Katif [Gaza settlement bloc]; there will be no more uprooting.”

Several hours later, the “Sovereignty Movement” issued a “cautious welcome” of the prime minister’s plans to impose Israeli sovereignty over West Bank settlements. The caution reflects the concern of the pro-settlement right that Netanyahu might join with the centrist Blue and White party after the elections.

In an election campaign clip, which features pools of blood shed by the victims of the “Oslo terror attacks” and photos of Gaza Strip settlers being dragged out of their homes during the 2005 Gaza withdrawal, the heads of the movement — Yehudit Katzover and Nadia Matar — explained that “ideological pedantry could be considered a welcome adherence to principle, but in the political arena such pedantry could result in the disastrous establishment of a left-wing government as occurred in the past.”

In February 2016, Feiglin wrote on his Facebook page, “When Nadia Matar —a veteran of the struggle for our holy land — asks me to come and lecture to ‘Women in Green’ about ‘imposing sovereignty,’ I jump to attention and show up.” And, indeed, he jumped to attention and showed up.

There is no certainty that Netanyahu truly intends to impose Israeli sovereignty over “Judea and Samaria.” The prime minister is aware of the demographic and diplomatic repercussions of such a move. For the sake of all the patients in need of cannabis, one can only hope that he will keep his other promise — to alleviate their suffering — and will not use a green leaf to hide annexation.