The major losers of the 2019 elections are clear before a single ballot is cast: peace with the Palestinians and the Arab world, public trust in the institutions of government, freedom from religion, and co-existence between Jews and Arabs. 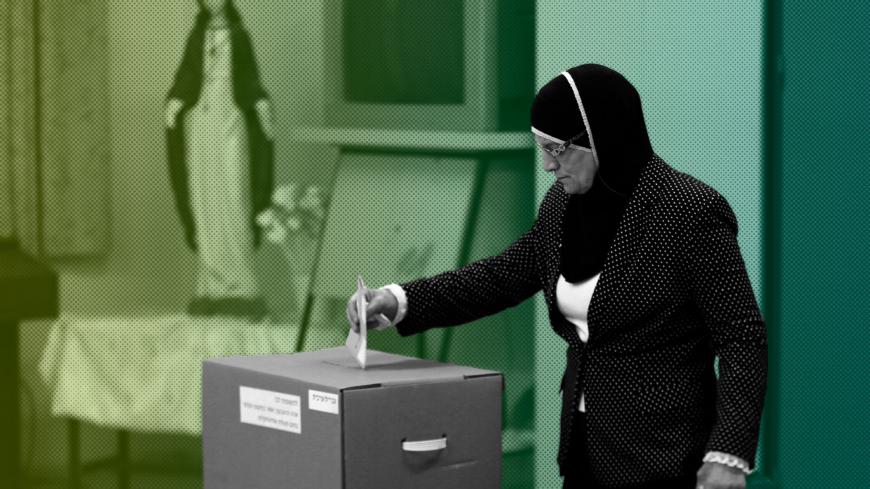 An Israeli Arab casts her ballot at a polling station inside a church in the northern town of Reineh, Israel, March 17, 2015. - REUTERS/Ammar Awad

As Israelis prepare to go to the polls on April 9, predicting the winner would be a fool's errand. A series of major losers, however, are already evident: peace with the Palestinians and the Arab world, public trust in the institutions of government, co-existence between the Jewish majority and Arab minority, and freedom from religion. Israel’s 35th prime minister, whoever he is, will find himself bound by social and geopolitical realities that will sap his ability to affect change in each of these important areas. Various considerations dictated by the need to forge a coalition with smaller, disparate parties will shrink any remaining room for maneuver.

Hopes for peace: The overriding agenda throughout the election campaign, the Zionist parties’ candidates, opinion poll results and the political parties' discourse all reflect attitudes deeply ingrained in Israeli society over the past decade under the leadership of Benjamin Netanyahu. It is far easier to spread fear, injected continuously and skillfully into Israelis’ brains, than to deconstruct it. It is far easier to sow hatred, spread abundantly throughout Israeli society for years, than to uproot it. Conducting realistic peace negotiations based on the 1967 borders with certain adjustments, on the evacuation of settlements and recognition of East Jerusalem as the capital of a Palestinian state would now be even harder, if not impossible, given the sheer weight of fear and hatred of the “other” amassed over the Netanyahu decade.

The right-wing bloc is openly striving for territorial annexation of West Bank lands. Its representatives in the outgoing Knesset have bequeathed the next government no fewer than 60 proposed bills containing some degree of annexation. The Knesset has already adopted eight into law. Legal opinions and a change in the state’s position on the status of the West Bank as occupied territory and Israel’s authority to act there have buttressed these de jure annexation measures. A new database maintained by the anti-occupation organization Yesh Din points out that the growing annexation measures increase the impression that Israel is turning itself into an apartheid state, with two categories of people under its sovereignty and rule: Israeli citizens enjoying full rights and Palestinian residents devoid of all political and other rights.

The center-left parties do not stand a chance of pulling together a “Jewish majority” in favor of the two-state solution, which matters due to the troubling yet likely correct assumption that no Jewish leader would sign an agreement with the Palestinians stipulating Israeli withdrawal from most of the occupied territories based on a non-Jewish Knesset majority, meaning one that relies on Arab votes too. A distinct majority of Israeli Jews do not want to pay the price of peace. A small minority, estimated at less than 15%, supports Labor and Meretz, the only two parties advocating a two-state solution to the Israeli-Palestinian conflict. The leadership of the Blue and White party, running neck-and-neck against Netanyahu and his Likud, includes distinctly right-wing elements, such as former Defense Minister Moshe Ya’alon, former Netanyahu Director of Communications Yoaz Hendel and former Cabinet secretary Zvi Hauser. All regard the term “two-state solution” as an obscenity.

Trust in public institutions: The 2019 elections will go down in history as a single-issue referendum: yes or no on Netanyahu. This phenomenon reflects a decline in the value of ideologies, disinterest in the principles of political parties and mistrust of the most important institutions of Israeli democracy. A large number of Israelis support a leader, Netanyahu, whom both the police and the attorney general strongly suspect of egregious criminal wrongdoing. The election campaign confirms the worrying findings of the 2018 Democracy Index of the Israel Democracy Institute indicating that only 26% of Israelis trust the Knesset and only 16% express trust in political parties. In other words, a sweeping majority of Israelis do not believe in their elected representatives. Two-thirds think their representatives are not doing their job, and 80% of Israelis think Knesset members take more care of themselves than they do of the public that elected them. The Democracy Index points to limited trust (50%) in law enforcement authorities, including the Supreme Court.

Co-Existence: The two largest parties — Likud and Blue and White, expected to comprise about one-half of the next Knesset (some 60 of 120 seats) — have a priori dismissed 20% of the country’s citizens, the Arab minority, as irrelevant. While Netanyahu, leader of the right-right bloc, was promising ministerial portfolios to the Union of Rightwing Parties, including outspoken ultra-right nationalist disciples of Rabbi Meir Kahane in the Jewish Power party, the leaders of the center-left bloc, Benny Gantz’ Blue and White and his colleagues, were rejecting the idea of a government coalition dependent on any form of support from the Arab parties. On election day 2015, to get out the right-wing vote, Netanyahu famously warned, “The Arabs were flocking in droves to the ballot box,” generating outrage. This year, Netanyahu's election slogan “It’s Bibi or Tibi,” a reference to himself and to Knesset member Ahmad Tibi, leader of the Arab Ta’al, has been accepted with equanimity.

Religious freedom: Following Netanyahu’s first victory in the 1996 elections, his rival Shimon Peres offered an interesting take on the election results: “The Jews,” he said, “defeated the Israelis.” In a 2003 article in the right-wing weekly “Besheva,” Moshe Feiglin, then a minor candidate of the Jewish Leadership faction for the Likud leadership, disagreed with Peres. He argued that the Israelis were the ones who actually defeated the Jews, “But it is a little harder to defeat reality, meaning the Creator.… They were unable to overcome the hurdles of reality, of God.” Feiglin then wondered what would be the “next invention in the war of the Israelis against the Jews.” Sixteen years hence, Feiglin, the messianic Jewish warrior and leader of Zehut, is galloping toward the Knesset at the head of an Army of God, riding on the backs of young secular Israelis buoyed by the heady aroma of cannabis.

Barring a shocking surprise, the vision of two states for two people and a State of Israel for two nations will move further out of reach. The resilience of Israeli democracy and its institutions will be further eroded and as will public trust. The hope of freeing Israelis of all religions and denominations from the chokehold of apparatchiks who have ordained themselves agents of the Almighty will dissipate.

Who will win on April 9? It's unclear. What is abundantly clear, however, is that lovers of peace and proponents of democracy, co-existence and religious freedom cannot afford to take the day off.