Annexing West Bank territory to Israel was once considered a far-fetched and even crazy idea in the Likud, but the idea is now being publicly advocated by party members. 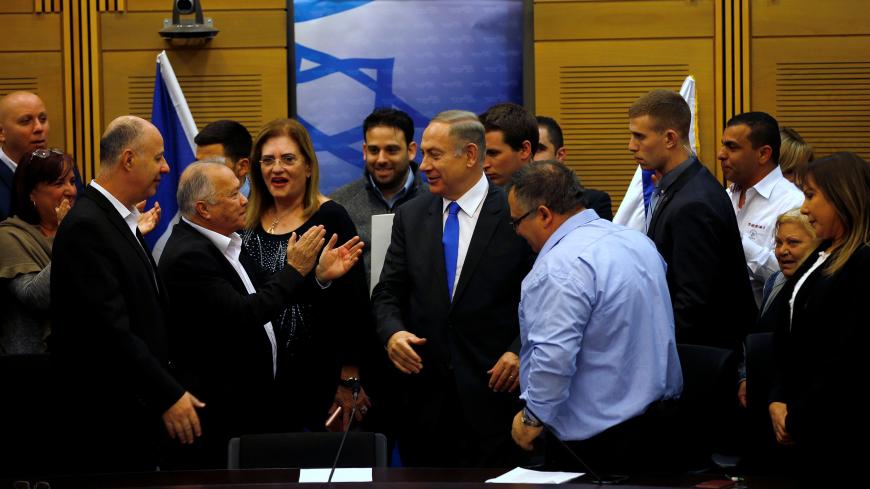 The current election campaign in Israel has thus far focused on embarrassing and even pathetic attempts to classify every party and candidate on a right-left platform, where even those defined as “leftists” do not suggest a diplomatic solution to the conflict with the Palestinians. At a time when Prime Minister Benjamin Netanyahu is busy inciting against Attorney General Avichai Mandelblit, who before the election intends to announce his decision on whether to indict Netanyahu for corruption, members of his Likud are committing to burying the two states for two people concept in favor of advancing the annexation of the West Bank. That is, what four years ago, on the eve of the 2015 election, was considered a crazy idea that only right-wing extremists toyed with has become mainstream in the Likud.

Thus on Feb. 5 Tourism Minister Yariv Levin said the following with great confidence: “The application of Israeli sovereignty over all of the Land of Israel is in my eyes not a question of if but how we do it and when we get to it. In my view, it should start with applying laws that have specific relevance not only for the residents themselves, but also for the territory.”

In fact, Justice Minister Ayelet Shaked had already promised to apply state laws in civil matters on the West Bank, in January 2018. “We intend to normalize life in Judea and Samaria [West Bank],” she had said. “We are in the territory. There’s no occupied state that seeks to regain the occupied land.”

Levin, like other Knesset members and ministers from the Likud (and other parties), have been recruited for the cause of annexing West Bank territories by the Sovereignty Movement, founded in 2010 by the right-wing activists Yehudit Katzover, of the Kiryat Arba settlement, and Nadia Matar, of Efrat, in the Etzion settlement bloc. The two also head a movement called Women in Green, which was established in 1993 following the signing of the Oslo Accords. The movement's popular name stems from its followers wearing green hats and demanding that Israel not return to the Green Line (border demarcation).

Today it seems that no one is even considering returning to the Green Line. With the Sovereignty Movement, Katzover and Matar seek to leverage the success of the right in Israel in order to head off any diplomatic arrangement with the Palestinians and to demand “annexation now.” During the lead-up to elections for the 21st Knesset, the movement is ratcheting up a gear, recruiting Likud members for its “mission” as they seek the support of right-wing voters.

The rationale for the movement's focus on the Likud is clear: The Likud is currently the ruling party, and according to the polls, is also expected to form the next government. In addition, the parties to the right of the Likud — such as the New Right and HaBayit HaYehudi — do not need to be convinced. Even more so, HaBayit HaYehudi’s Shaked took the first steps toward annexation when she advanced a government decision that applies Israeli government legislation to the territories of the West Bank as well.

The Sovereignty Movement has obtained the support of the Central Fund of Israel, founded in 1975 by Hadassah Marcus in New York. The fund's original goal was to assist needy families in Israel and donate to synagogues, but since the Oslo Accords, it has given millions of dollars to the settlement enterprise, including to Women in Green and the Sovereignty Movement.

In the past, Women in Green had made do with protests and with spreading the message to the Israeli public to oppose any diplomatic compromise on the territories and withdrawal to the 1967 lines. Today, Matar and Katzover are recruiting decision makers in the Knesset and the government to establish facts on the ground.

The Sovereignty Movement is currently focused on creating a lobby in the Knesset. Its activists are working the ruling party, distributing a journal running a website and promoting paid content on social media. The movement's influence played a role in Likud’s Central Committee voting in December 2017 in favor of a non-binding decision imposing Israeli sovereignty on Israeli-controlled territories of the West Bank, including the Jordan Valley. This, it turns out, was just the beginning.

The Sovereignty Movement posted a video on Feb. 12 calling for imposing Israeli sovereignty on the West Bank territories. “First of all, we get the idea of a Palestinian state off the table,” says Science and Space Minister Ofir Akunis in the video. “Second, we need to make brave, difficult, challenging decisions that aren’t simple when facing the international community. First of all, we must impose sovereignty on West Bank Area C.” According to him, on the land designated Area C, under Israeli civil and security control, there is a clear Israeli and Jewish majority.

Akunis does not explain what would follow the annexation of Area C territory, but Social Equality Minister Gila Gamliel claims in the video that Israeli law must be applied to all of Judea and Samaria. Culture Minister Miri Regev, not to be left behind, says, “Between the Mediterranean and the Jordan, there is room for only one nation-state, the State of Israel. Therefore, national rights in these regions belong exclusively to the Jewish nation.”

As far as Katzover and Matar are concerned, this represents a great success. Senior ministers in the Israeli government are not hiding their real intentions — the annexation of Area C territory to start, and later, according to Regev, it will be possible to start to dream about all the land from the Mediterranean to the Jordan.

Gen. (res.) Danny Rothchild, a former head of Israel’s Coordination of Government Activities in the Territories and a current member of the Officers for Peace movement, tweeted on Feb. 13 that the commitment the Sovereignty Movement is extracting from public officials amounts to whitewashing. “The significance of annexation is the incorporation of 2.6 million Palestinians into the State of Israel and turning it into a binational state,” he asserted.

Thus, while Israel awaits the decision of its attorney general and wonders whether Benny Gantz, leader of Israel Resilience, stands on the left, center or right, the settlers are gaining ground on the road to the annexation of the West Bank and to determining the future of Israel for generations to come.