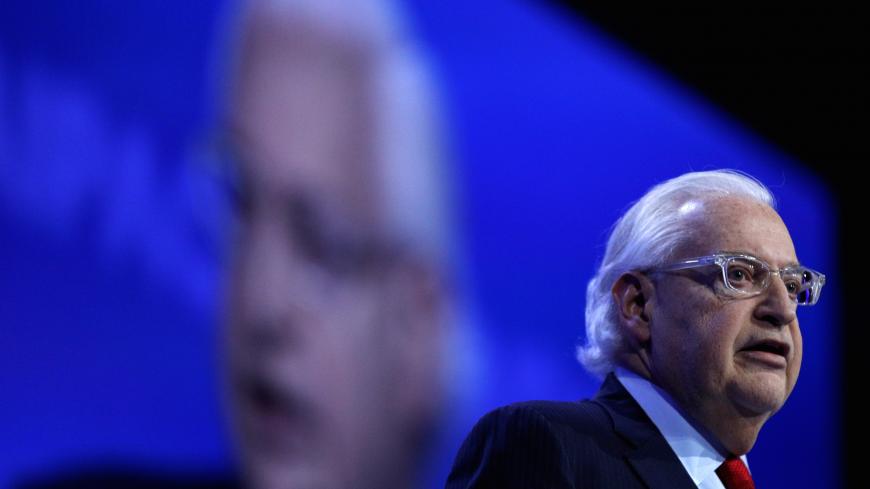 US Ambassador to Israel David Friedman delivers remarks during the AIPAC convention at the Washington Convention Center in Washington, US, March 2, 2020. - REUTERS/Tom Brenner

The United States relocated its embassy in Israel from Tel Aviv to Jerusalem in May 2018. Two years later, Ambassador David Friedman stated that the Donald Trump administration will support Israeli plans for partial West Bank annexation under certain conditions.

In a May 6 interview with the right-wing Israel Hayom newspaper, Friedman explained that when the process of mapping the area to be annexed is completed, Israel would need to suspend settlement construction in the areas not to be annexed, and Prime Minister Benjamin Netanyahu would need to propose to Palestinian President Mahmoud Abbas that they open negotiations on the basis of the Trump administration's Middle East peace plan. Then, and assuming that Netanyahu will get Knesset approval for an annexation plan, the United States will recognize Israel's sovereignty in the areas that the plan outlined. Israel Hayom will publish the full text of the interview on Friday.

Friedman also gave an interview to the Jerusalem Post, making sure that his annexation statements got into the headlines. It's the perfect gift for Netanyahu just a day before the deadline for presenting the new government to the Knesset. “We will be ready to address this issue if Israel is ready. Ultimately, as Secretary [of State Mike] Pompeo said, it’s Israel’s decision. They have to decide what they want to do," said the ambassador.

Friedman was clear on the negotiation point, emphasizing that the new Israeli premier must offer to talk to the Palestinians. US recognition of Israel’s sovereignty over West Bank settlements would depend on Israel’s agreement to negotiate "in good faith," as Friedman told the Jerusalem Post. “The expectation is that the prime minister will agree to negotiate — and if the Palestinians show up, he will negotiate in good faith based on this plan.”

As a reminder, Israel has already embraced Trump’s peace plan, which Blue and White leader Benny Gantz has called on the political system to accept in full. The unity agreement enables Netanyahu to present an annexation proposal for voting as early as July 1.

Netanyahu received another American gift shortly after the interviews. Pompeo is expected to arrive in Israel May 13 for a swift 24-hour visit, to meet with Netanyahu and his unity-government partner Gantz.

Israel’s reactions to the interviews came in deeds before words. Defense Minister Naftali Bennett approved the construction of some 7,000 housing units in the West Bank settlement of Efrat, in the Etzion settlement bloc not far from Jerusalem. After the announcement, Bennett’s colleague in the Yamina party leadership, former Justice Minister Ayelet Shaked, called on Netanyahu to rapidly annex the West Bank settlements, arguing that this moment, Israel has a “supportive [US] president.”

Bennett has been using his time in office to advance the settlement cause and create facts on the ground. On May 3, Bennett seized municipal power from the Palestinian Authority in Hebron to approve the construction of an elevator and ramp at the Tomb of the Patriarchs, making the holy site wheelchair accessible. And while the Palestinians support facilitating access to handicapped people, they objected fiercely to the project, which flaunted the 1997 Hebron protocol between Israel and the Palestine Liberation Organization signed by Netanyahu himself.

For the moment, Netanyahu is in no hurry to get Yamina join his unity government with Gantz. Politically, he no longer depends on the party, and Bennett is only too aware of it.