Visiting Israel before the end of the administration he serves, US Secretary of State Mike Pompeo's grandiose gestures and warm reception were clearly the last hurrah of a relationship with a time limit. 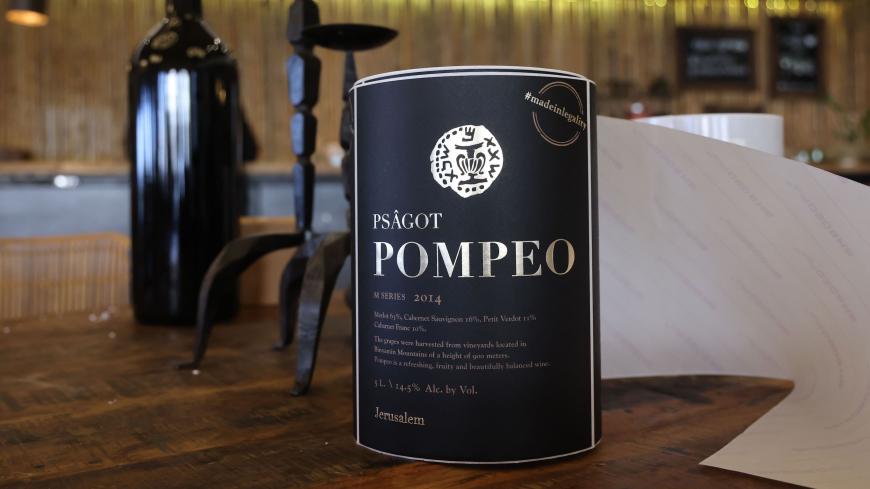 Labels for a wine named after US Secretary of State Mike Pompeo wait to be put on a bottle at Israeli winemaker Yaakov Berg's Psagot Winery, in the settlers industrial park of Sha'ar Binyamin near the Israeli Psagot settlement in the occupied West Bank north of Jerusalem on Nov. 18, 2020. - EMMANUEL DUNAND/AFP via Getty Images

US Secretary of State Mike Pompeo was wined and dined this week as he paid a sentimental farewell three-day visit to Israel.

Pompeo’s visit spanned the country and he arrived with as many gifts as he could carry. He flew by helicopter to the West Bank settlement Psagot, setting a historic precedent for a visit by a US secretary of state to the settlements. He sipped from a bottle labeled “Pompeo Wine,” an honor second only to the one conferred on his boss, President Donald Trump, who has a future Golan Heights settlement named after him. Pompeo was then choppered off for a rare visit by a US secretary of state to the Golan, an area Trump recognized as sovereign Israeli territory. There, he received a briefing by former army chief and current Foreign Minister Gabi Ashkenazi.

“This trip was more of a pilgrimage,” a senior Israeli official in Jerusalem told Al-Monitor on condition of anonymity. “Pompeo was here on a visit more as an evangelical pilgrim than a secretary of state, but both sides enjoyed every minute.”

Throughout the last four years, the Trump administration has bestowed many presents on Israel and on Prime Minister Benjamin Netanyahu. This week, Pompeo had one last gift before leaving his post: the US declaration by which from now on, Israeli products made in West Bank settlements would be labeled in the United States as “Made in Israel” rather than distinguished from other Israeli goods. “The only problem with all of this,” the Israeli official added, “is that it will all be over in just over a month. Let us hope these last-minute grabs do not anger [President-elect Joe] Biden’s people and lead them to overturn the declarations and actions of the final Trump days.”

Two issues remain on Israel’s agenda for the final days of Israel’s best ever friend in the White House. The first is a possible US attack on Iran’s nuclear program infrastructure. The second is sanctions on Iran that would thwart the declared intentions of the Biden administration to adopt confidence-building measures vis-à-vis Iran in order to negotiate a new nuclear deal.

Officials in Jerusalem see no prospects for any US attack, especially after the unusual Nov. 12 declaration by Gen. Mark Milley, chairman of the Joint Chiefs of Staff, who said, “We do not take an oath to a king or a queen, a tyrant or a dictator. … We take an oath to the Constitution.” Thus, Israel’s only remaining option is to press Trump on sanctions, which that came up in Pompeo’s talks with Netanyahu and Ashkenazi.

Pompeo received a detailed security briefing as he stood on Mount Bental overlooking Syria, a day after Israel mounted an attack on Iranian targets there. In a departure from its usual habits, Israel acknowledged responsibility for the strikes and posted videos of what it described as the bombing of eight Iranian and Syrian military infrastructure facilities on Syrian soil. The attack followed the discovery of explosives planted along the Golan border with Syria, which Israel blamed on Iranian intelligence Unit 840, directed by the Quds Force of the Revolutionary Guard Corps.

The strike, which reportedly resulted in 10 fatalities, was a clear and public signal that Israel would not allow Iran and its proxies to approach its border with Syria. Pompeo expressed keen interest in the details of the incident and Ashkenazi thanked him and the Trump administration for enhancing Israel’s security.

Though Israel would have been happier to have Pompeo’s visit and declarations at the start of Trump’s term rather than at is end, Netanyahu’s people have no complaints. “Secretary Pompeo is a true admirer of Israel,” a senior Israeli diplomatic source told Al-Monitor on condition of anonymity. “His support for Israel is unconditional and totally authentic. His tour here may have been the opening salvo of a 2024 presidential run and maybe not. Either way, we are happy about what he did and what he said and we do not believe the next administration will reverse things.”

Netanyahu is trying to prepare for a Biden administration, particularly Biden’s relations with Iran. He swore to avoid the mistakes he made with President Barack Obama that poisoned their relationship and resulted in Netanyahu’s exclusion from the negotiations with Iran on its nuclear program.

Netanyahu faces a Dec. 23 deadline for approving the state budget, which if not met would automatically disband the Knesset and bring on new elections. He would be better served by sticking to his partnership with Gantz and Ashkenazi rather than opting for yet another round of elections from which he will likely emerge beholden to Yamina leader Naftali Bennett and be forced to form a radical right-wing government based on a narrow Knesset majority.

Pompeo undoubtedly did the best he could to help. “May I not be the last secretary of state to visit this beautiful land,” Pompeo wrote in the Psagot winery guestbook. While Netanyahu undoubtedly agrees, he knows that he and the Israeli right are in for a difficult period as they wean themselves off the lavish lifestyle afforded by Trump.