Secretary of State Mike Pompeo not only visited a settlement winery, but also announced that West Bank settlement products exported to the United States may be labeled as made in Israel. 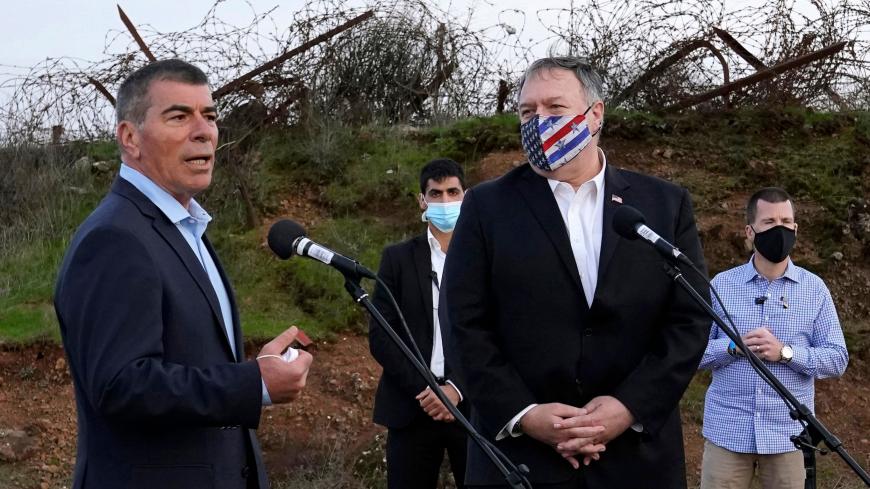 Israeli Foreign Minister Gabi Ashkenazi (L) speaks alongside US Secretary of State Mike Pompeo following a security briefing on Mount Bental in the Israeli-annexed Golan Heights, near Merom Golan on the border with Syria, on Nov. 19, 2020. - PATRICK SEMANSKY/AFP via Getty Images

Secretary of State Mike Pompeo visited the Psagot winery today, becoming the first top US diplomat to visit a Jewish settlement in the West Bank. The visit was described as private and was heavily guarded. “It is a blessing to be here in Judea and Samaria. May I not be the last secretary of state to visit this beautiful land,” Pompeo wrote in the Psagot guestbook, using the Hebrew names for the West Bank area.

The vineyard named one of its wines after Pompeo, hailing his 2019 announcement that the Donald Trump administration would no longer consider Israeli West Bank settlements in violation of international law. Pompeo said at the time, “After carefully studying all sides of the legal debate, this administration agrees with President [Ronald] Reagan. The establishment of Israeli civilian settlements in the West Bank is not per se inconsistent with international law. … Calling the establishment of civilian settlements inconsistent with international law hasn’t worked. It hasn’t advanced the cause of peace.”

After the winery visit, Pompeo declared that products from West Bank settlements could now be labeled “Made in Israel.” “All producers within areas where Israel exercises the relevant authorities …  will be required to mark goods as ‘Israel,’ ’Product of Israel’ or ‘Made in Israel’ when exporting to the United States," he said. These new guidelines will apparently apply to West Bank Area C, which is under Israel’s civil and security control. Products from Area A and Area B, under Palestinian civil control, would be labeled "Made in the West Bank," while those from the Gaza Strip would be labeled "Made in Gaza." Pompeo’s declaration signals a major shift in US policy on the issue, which is also greatly debated within the European Union.

On the way to the winery, Pompeo made a stop at the Qasr el Yahud site in the Jordan Valley, where some Christian traditions hold that Jesus was baptized. After the winery visit, Pompeo was flown by an Israeli military helicopter to the Golan Heights for a diplomatic/security briefing.

Earlier in the day, Pompeo met with Prime Minister Benjamin Netanyahu at the Jerusalem King David Hotel. Speaking at a joint press conference, Pompeo stated that the US administration will take action against the anti-Israel Boycott, Divestment and Sanctions movement and the groups that support it. “We will regard the global anti-Israel BDS campaign as anti-Semitic. We will immediately take steps to identify the organizations that engage in hateful BDS conduct and withdraw US government support from such groups,” said the secretary of state, adding that all nations should “recognize the BDS movement for the cancer that it is.”

According to reports published before the meeting in Jerusalem, Netanyahu told his associates he will ask the Trump administration for the green light to advance construction plans in the north Jerusalem Atarot neighborhood, which is on the far side of the Green Line. Other reports claim that settlers are pressuring Netanyahu to regularize as many illegal outposts as possible before President-elect Joe Biden takes office. US lobbying group JStreet tweeted yesterday, “Netanyahu is trying to squeeze in as much illegal settlement construction as he can before his enablers in the Trump administration leave office.”