The US administration knows that the new government in Israel means that the days of working only with Prime Minister Benjamin Netanyahu are over. 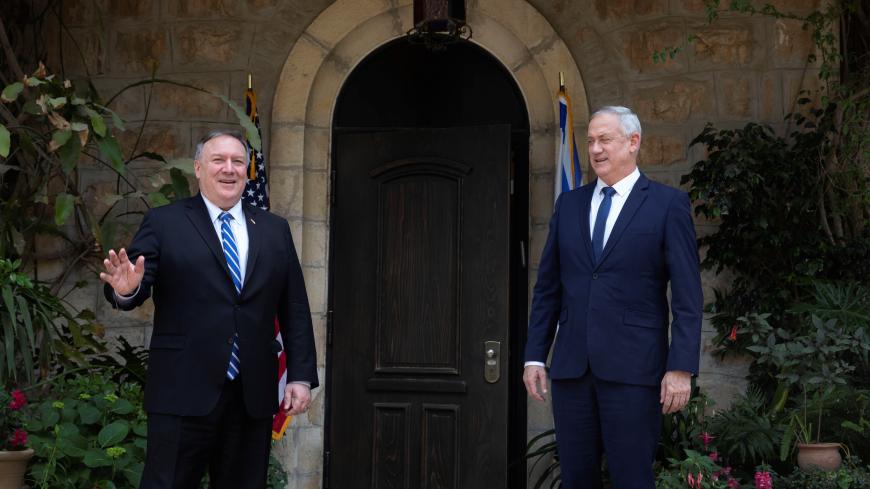 US Secretary of State Mike Pompeo meets with Israel's Blue and White leader Benny Gantz in Jerusalem, May 13, 2020. - Sebastian Scheiner/REUTERS

Secretary of State Mike Pompeo arrived to Israel on May 13 for an eight-hour visit marking the end of an era in Israeli-US relations. “No more one-man show; that’s an old story,” a high-level Blue and White member told Al-Monitor on condition of anonymity. “Pompeo understands that now he has to deal with a different system altogether. Until now, the Americans were used to closing everything with [Israel’s ambassador to the United States] Ron Dermer, who served as [Prime Minister Benjamin] Netanyahu’s right-hand man in Washington. But now, surprise surprise, the party’s over. From now on, Israel is governed by a two-headed regime.”

This new situation was evident in the fact that Pompeo chose to meet with future Foreign Minister Gabi Ashkenazi even before the latter was sworn in, while he did not meet with outgoing Foreign Minister Israel Katz at all. With Netanyahu, an old friend of Pompeo's, the Americans didn’t need to work with Israel’s foreign minister, but they certainly will now. “The Americans have the entire world on their head; they are not up on all the details [regarding Israel],” remarked a senior Israeli official who participated in the Pompeo meetings. The official told Al-Monitor on condition of anonymity, “They have internalized the new situation and understand that from now on, the game will have totally different rules. It will be hard for them to get used to the change.”

The meeting mainly addressed the following issues: Israeli annexation plans for the Israeli localities in the West Bank and the Jordan Valley, the Iranian issue and China. With regard to the first item, Pompeo was careful to declare before his visit that annexation is “an Israeli decision,” but he was much less polite when it came to China. Outside the room, speaking to the media, American official sources expressed "concern" over China’s continuous investments in Israeli infrastructure and technology. Inside the room, in confidential talks between American and Israeli officials, the Americans sounded quite different. Israel is being asked to choose between China and its greatest ally (the US), which provides it with a diplomatic, economic, military and political umbrella. So far, China has invested billions in Israel and ranks second in terms of commerce with Israel.

Netanyahu will have to make a difficult but obvious choice. Ahead of Pompeo’s visit and on the backdrop of American warnings, Jerusalem reportedly related to Washington it was reassessing Chinese participation in the bid for the construction of the biggest desalination plant in the Middle East, to be located near Ashdod in the south of the country. Now Jerusalem is concerned over Beijing’s reaction, should the Chinese company be distanced from the tender. Israel hopes not to become another victim of China’s "wolf warrior" diplomacy.

“The Chinese greatly appreciate Israel and view it as a commercial partner and an engine of innovation and technology,” an Israeli diplomatic source told Al-Monitor on condition of anonymity, “but they also know that we are allied with the United States. They understand our constraints. At the end of the day, it is the US that votes in our favor in the world’s global forums, and not China.”

Pompeo met with Mossad head Yossi Cohen to discuss continued efforts against Iranian expansion in the Middle East, specifically Syria. Cohen is in charge of the Iranian file, and the main source of intelligence on Iranian doings in the Middle East. The conversation between the two focused on the condition of the Iranian regime, its slow recovery from the elimination of Gen. Qasem Soleimani and continued sanctions as Iran uses up its last reserves to survive until the end of the year.

But Pompeo’s most interesting meetings in Israel were with incoming defense minister and alternate Prime Minister Benny Gantz, and with incoming Foreign Minister Gabi Ashkenazi, who will replace Gantz as defense minister in a year and a half. The most explosive issue was annexation. The agreement between Blue and White and the Likud enables Netanyahu to bring the annexation proposal to the Knesset starting July 1. Gantz and Ashkenazi are not exactly excited about a one-sided annexation of territories in the West Bank. However, their worries now are mainly focused on a possible annexation of the Jordan Valley, which may well endanger Israel’s peace agreement with Jordan and the stability of the entire region. Nevertheless, Gantz and Ashkenazi have decided not to directly attack the annexation idea, but to present to Pompeo the plan’s drawbacks and possible dangers.

“Pompeo is very experienced; he is familiar with the region and knows his stuff," an Israeli diplomatic source told Al-Monitor on condition of anonymity following the meetings. “He understands the significance of what he heard from Gantz and Ashkenazi. The question is what will he do with it.”

The Israeli impression is that Pompeo is secretly relieved not to be the one in charge of the explosive Jordan Valley issue. Instead, President Donald Trump’s adviser Jared Kushner and US Ambassador to Israel David Friedman will be handling this hot potato. “Pompeo understands the extent of this headache,” a high-placed Israeli diplomat told Al-Monitor on condition of anonymity. “He knows that a blow-up of the peace treaty between Israel and Jordan can undermine stability in Jordan, possibly leading to a chain reaction throughout the entire Middle East. On the other hand are Netanyahu’s political interests and President Trump’s need to mollify Netanyahu before November. In other words, a real mess.”

The biggest question is whether Pompeo and Ashkenazi will hit it off together and enjoy a positive communications channel. As far as is known, the meeting went well and there was excellent chemistry between the two. Ashkenazi has an encouraging record of forming good relations with his American counterparts. When he was chief of staff, Ashkenazi became close friends with his then-US counterpart Michael Mullen, and the connection remains to this day. On the personal level, Ashkenazi is a serious and engaging dialogue partner, and it seems that he was also very impressed by Pompeo.

“If a direct and genuine communications channel opens between the two, that will be the sign that relations between Israel and the United States will not be limited to two people — Trump and Netanyahu alone — but a totally different story.” This opinion came from a former high-ranking Israeli diplomat who also worked in the United States and spoke to Al-Monitor on condition of anonymity. “It will be the first test of the new Israeli diplomacy, under the two-headed leadership of Gantz and Netanyahu.”