Secretary of State Mike Pompeo will arrive in Israel with a long list of issues to discuss the day the new government of Prime Minister Benjamin Netanyahu and Blue and White leader Benny Gantz is sworn in. 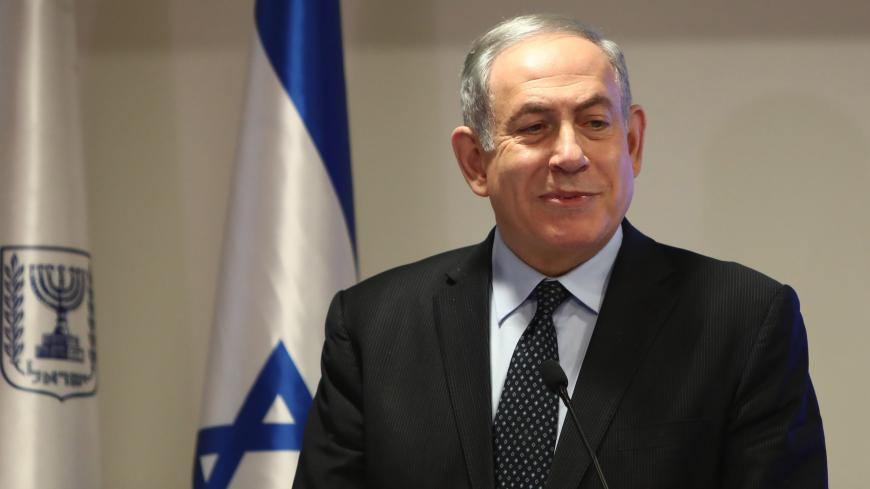 Prime Minister Benjamin Netanyahu slistens during a joint press conference with Israel's health minister regarding preparations and new regulations for the novel coronavirus, at the Health Ministry in Jerusalem on March 4, 2020. - GALI TIBBON/AFP via Getty Images

Secretary of State Mike Pompeo will visit Israel May 13, the day the country's two-headed unity government scheduled to be sworn in. The formation of Israel’s 35th government is supposed to end the political crisis that has plagued Israeli politics for the past year and a half. Pompeo’s visit comes about 500 days after the demise of Israel’s last elected government and on the cusp of a newly elected one.

Three rounds of inconclusive elections over the past year failed to break the political deadlock. The last-minute agreement on a unity government comprising the Likud Party and its election challenger, the Blue and White Party staved off deterioration into a fourth round of elections that could have also exacerbated the pandemic-induced economic downturn and further fueled the battle between Prime Minister Benjamin Netanyahu and the country’s legal and law enforcement authorities.

Pompeo will obviously be spared the 14-day quarantine the Health Ministry requires of all those arriving in Israel. Instead, he will meet with Netanyahu and Blue and White leader Benny Gantz, the putative co-prime ministers set to be sworn in under the deal they forged that changes Israel’s system of government. Pompeo is also likely to meet an old friend from his days as CIA director, Mossad chief Yossi Cohen.

According to diplomatic sources, Pompeo's quick visit has several agenda items. They include coordinating positions ahead of Israel’s expected unilateral annexation of West Bank settlements allowed by President Donald Trump’s peace plan, allaying Israeli concerns over a possible easing of US sanctions on Iran, exchanging information regarding Israel’s campaign against Iran’s presence in Syria and probably expressing US displeasure over massive Chinese investments in Israel. The US concern over China’s involvement in Israel has to do with the planned construction of the Middle East’s largest desalination plant on Israel’s Mediterranean coast by a major Chinese group that won the bid for the project. The Americans are continuing to warn Israel about the growing Chinese involvement in major infrastructure projects and senior Israeli officials say the issue is overshadowing the flourishing US-Israel ties, especially against the backdrop of increased US-China tensions over the novel coronavirus crisis.

Pompeo’s meeting with Cohen will likely focus on the situation in Iran, continued US sanctions and the results of Israel’s ongoing campaign to dislodge Iran from Syria. Cohen is in regular touch with Pompeo to ensure that the Americans do not ease their sanctions regime despite the health crisis that is exacerbating Iran’s economic woes and the regime’s hold on power. Israel is also worried about the United States having given the newly constituted Iraqi government a grace period, allowing it to import energy from Iran. Pompeo will probably assure Israel that the Trump administration does not intend to change its maximum-power campaign against Iran.

Pompeo will report to Washington on the emerging political situation in Israel, unprecedented in the state’s 72-year history and perhaps in modern Western politics. The Americans are used to dealing directly with Netanyahu, who has held the reins of power in recent years and made most decisions on his own. They will now have to adapt to dealing with two prime ministers who enjoy equal rights and power, with each holding veto power over the other.

Pompeo knows that Blue and White has grave reservations over Netanyahu’s planned unilateral annexation measures as well as his planned annexation of the Jordan Valley that threatens King Abdullah’s regime in neighboring Jordan. Pompeo will have to maneuver between the two former military chiefs who head Blue and White, Gantz and designated Foreign Minister Gabi Ashkenazi, and Netanyahu himself, who intends to move ahead with annexing as much West Bank territory as possible.

Trump and Pompeo hold the keys to developments in the region. Should they wish to do so, they could dampen Netanyahu’s enthusiasm for annexation, presenting him with tough conditions for US approval or telling him the time is not ripe for such heightened risks.

According to prevailing assessments, Netanyahu will manage to hold the Americans to their previous commitments on the annexation issue. In that case, Blue and White will have no choice but to go along, as the coalition agreement grants Netanyahu and Gantz veto power over each other’s decisions on all matters except for the annexation issue. Beginning July 1, per the agreement and his understandings with the Americans, Netanyahu can bring the annexation proposal to a vote in the government and Knesset, where it can expect broad support despite the reservations in the Blue and White leadership.

Meanwhile, Israel’s Supreme Court disappointed its political center-left petitioners this week. An expanded panel of 11 justices gave a seal of approval to Netanyahu’s continued rule despite his corruption indictment and avoided intervening, at least for now, in the controversial articles of the coalition agreement. In their unanimous decision, the justices chose not to risk fueling the flames and provide Netanyahu with an excuse to call a fourth round of elections.

The bottom line is that Netanyahu has succeeded on a mission that until recently appeared impossible. His trial for bribery, fraud and breach of trust is scheduled to begin May 24. He is supposed to present himself every morning in the Jerusalem District Court for what is shaping up to be a complex trial that could last years. Netanyahu will then have to devote his evening hours to running the affairs of one of the most complicated states on earth. The situation that appeared so far-fetched just months ago is about to play out.

Netanyahu has so far overcome all obstacles, but he knows the real and most dangerous hurdle lies ahead: the trial itself. By avoiding intervention in the political quagmire, the nation’s top court focused the public attention on the criminal trial itself. With the expected establishment of a unity government, Netanyahu’s hold on the state’s law enforcement institutions and his prospects of evading trial are growing weaker. Netanyahu is betting everything on remaining prime minister and at the same time conduct his criminal trial. If he turns out to be wrong, he might yet find himself wearing prison garb.