Unhappy Netanyahu must now do with Biden

The first portfolio that Israeli Prime Minister Benjamin Netanyahu will have to deal with vis-a-vis the new Biden administration is the Iranian file. 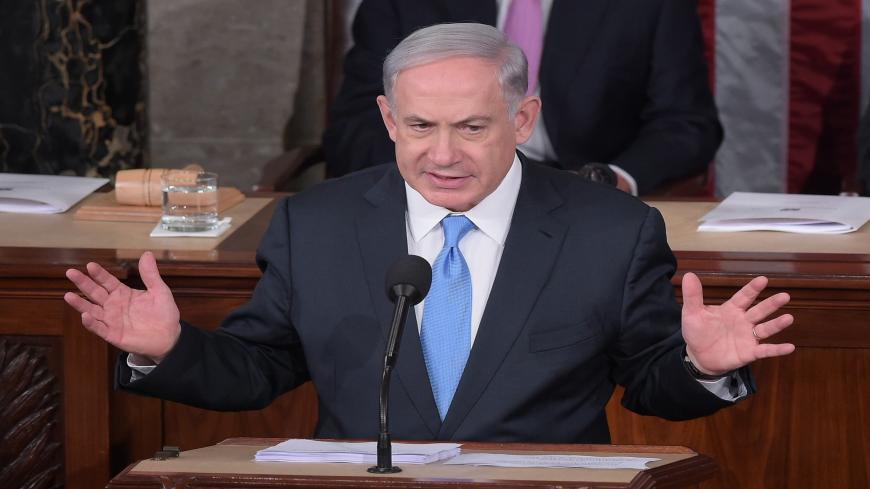 Israeli Prime Minister Benjamin Netanyahu addresses a joint session of the US Congress, at the US Capitol, Washington, March 3, 2015. - MANDEL NGAN/AFP via Getty Images

Israeli Prime Minister Benjamin Netanyahu is facing a tough dilemma given media projections of Joe Biden as the president-elect of the United States. As world leaders took turns congratulating Biden, Netanyahu pondered how to deal with this hot potato on his desk, repeatedly consulting his man at the White House, Israeli Ambassador Ron Dermer. He knew he could not avoid congratulating Biden, the 46th US president. He also knew he could not congratulate Biden without incurring the wrath and possible revenge by outgoing President Donald Trump, the proverbial gift that has not stopped bestowing gifts on Israel and Netanyahu throughout his four-year term. What's more, even as he mulled his options, Trump’s point person on Iran Elliott Abrams was visiting Jerusalem and discussing a series of additional sanctions on the Tehran regime with his Israeli counterparts. Should Netanyahu congratulate Biden nevertheless, even as Trump’s envoy was discussing increased pressure on Iran to benefit Israel? What was he going to do?

Netanyahu and his Defense Minister Benny Gantz eventually settled on a compromise that left them empty-handed. They were both among the last world leaders to congratulate Biden and avoided using the president-elect title in their message in order to avoid angering the incumbent. The only senior Israeli office holder to wholeheartedly salute Biden was Justice Minister Avi Nissenkorn of the Blue and White party led by Gantz and Foreign Minister Gabi Ashkenazi, earning himself a sharp rebuke from his party boss.

Israel is setting great store by the series of new Iran sanctions in response to non-nuclear issues, such as Iran’s human rights record and its proliferation of terrorism. The plan, devised in Washington and Jerusalem, would make it very hard for a Biden administration to lift the sanctions without a convincing reason. Netanyahu and Gantz are hoping to hem in Biden with Trump’s sanctions in order to scuttle a reenactment of the conciliatory Barack Obama-era policy on Iran. The tradition of congratulating elected US presidents has thrown a monkey wrench into the works.

Israel is hoping to avoid the mistakes Netanyahu made during Obama’s presidency, when he enraged the president to such an extent that he completely excluded Israel from the negotiations on Iran’s nuclear program. The goal set by Netanyahu and Gantz this time is to be included in the process and to “help” Biden avoid a return to Obama’s goodwill toward Iran.

“We are hoping that the president-elect does not squander the achievements of Trump’s ‘maximum pressure’ policy,” a senior Israeli diplomatic source told Al-Monitor on condition of anonymity. “In the final analysis, both administrations — Trump’s and Biden’s — understand that a new agreement must be reached with Iran. Our goal is for the new agreement to plug most holes of the old agreement, to include an extended timetable for its various milestones and to cover other issues such as Iran’s ballistic missile and uranium enrichment programs, as well as its conduct in the region. A Biden administration might not disagree with these insights.”

Officials in Jerusalem knew that Trump was about to fire Defense Secretary Mark Esper. A senior Israeli security source told Al-Monitor the prospect of Esper’s dismissal after the elections, even if Trump loses, came up in discreet contacts with the Pentagon in recent weeks. Officials in Jerusalem believe Trump is taking his revenge on Esper for his reluctance to deploy US troops to quell demonstrations against police brutality.

Despite his warm, intimate relationship with Trump, Netanyahu knows his ally is unpredictable and therefore makes sure to avoid getting in his gun sights. Given his choice, Netanyahu prefers an angry Biden to a furious Trump, knowing that making up with Biden will be easier than with Trump. No one wants to mess with a furious Trump in the final weeks of his presidency.

Brig. Gen. (Res.) Michael Herzog, former chief of staff to many Israeli defense ministers who was also involved in most of Israel’s peace negotiations over the years, told Al-Monitor, “Biden will not be Obama and 2021 is not 2009. The sympathy that Biden and his VP Kamala Harris have for Israel stems from an emotional attachment, not an analytical approach like Obama’s. I know his foreign policy advisers — these are reasonable people who know the region well and have no illusions. There is plenty to work with.”

Many of Biden's advisors and those floated as potential cabinet picks have good relations with Netanyahu and are well known to the Israeli premier.

Biden, according to the prevailing assessment in Jerusalem, will renew negotiations with Iran and strive for a new deal plugging up some of the holes of the original one, extending its timetable and also covering Iran’s regional conduct.

In fact, Biden’s victory did not raise concerns among Israel’s security agencies, unlike the deep worry many voiced at prospects of Trump-led negotiations with Iran should he be reelected. “A second-term Trump, with his ‘dealmaker’ image and aspirations for the Nobel Peace Prize could have yielded a deal that would have been no better than what Obama achieved,” an Israeli intelligence source told Al-Monitor a few months ago, on condition of anonymity.

Israel’s main problem right now is the delayed handling of this and other issues. There is no ongoing contact with Biden’s people, no attempt to create a shared agenda and lay the foundations for cooperation with the incoming administration on matters vital to Israel’s security. “At this stage, we should have been in the middle of contacts with Biden’s team,” a senior Israeli diplomatic source told Al-Monitor on condition of anonymity. “Unfortunately, this is not the case, and the fact that Netanyahu delayed congratulating Biden is no help.”

Throughout the campaign, Biden's team avoided contact with foreign officials to prevent a perception of interference in the election.

The task facing Netanyahu is not an easy one. He has to erase from Biden’s memory the embarrassing Israeli declaration of construction in East Jerusalem on the very day the vice president visited the city in 2010, Netanyahu’s humiliating 2015 address to a joint session of Congress behind Obama’s and Biden’s backs, and the delay in sending his well wishes on Biden’s election. Netanyahu has faced tougher problems in the past. He and Biden have known each other some four decades, and if the prime minister offers several goodwill gestures toward a Biden administration in its early days, he may be able to establish a different relationship with the Democratic White House than he had with Obama’s.