The fact that US President Joe Biden is taking his time in calling Israeli Prime Minister Benjamin Netanyahu, and the fact that he did not refer to Israel or to the Iranian threat in his first foreign policy speech, deeply worries Jerusalem. 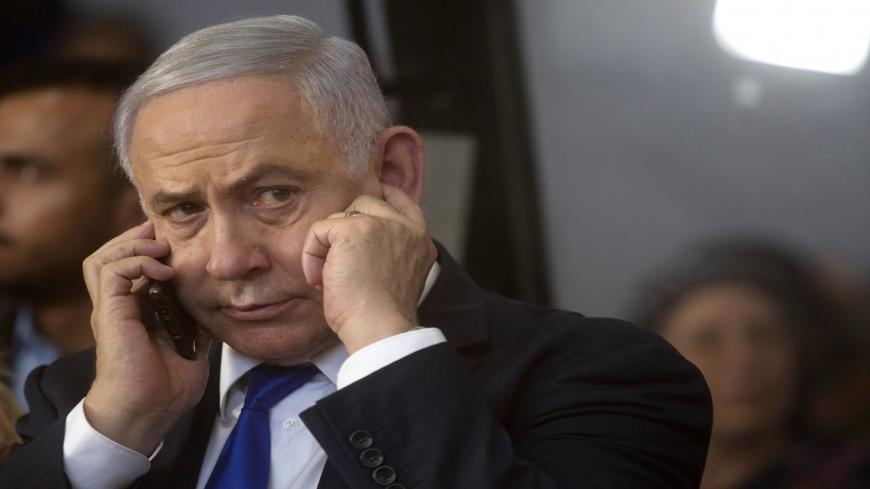 Israeli Prime Minister Benjamin Netanyahu speaks on the phone during an event marking the anniversary of the 1929 killing of 67 Jews by Palestinian rioters, Hebron, West Bank, Sept. 04, 2019. - Lior Mizrahi/Getty Images

As of this morning, Feb. 5, Israeli Prime Minister Benjamin Netanyahu continues to bite his nails as he waits by the phone for a long-anticipated call from the White House. Just as Netanyahu took his time congratulating US President-elect Joe Biden on his election victory over President Donald Trump in November, so now-President Biden is taking his time getting back to him. This would never have happened with Trump. Phoning Netanyahu was at the top of his to-do list when he took office in 2017. Four years later, Netanyahu has been relegated to the sidelines. The cushioned, pampered Trump protege finds himself being punished, sent to stand in the corner.

“This may not be deliberate,” an Israeli diplomatic source told Al-Monitor on condition of anonymity. “The Americans are not really focused right now on Netanyahu and his business; they have other things to deal with. Maybe Biden just doesn’t feel like handing Netanyahu an electoral advantage on the eve of Israel’s elections. After all, Biden is fully aware of who he is dealing with and knows how Netanyahu’s office will spin the first phone call between them.”

Either way, tensions in the prime minister’s office are sky high and being projected all the way to the Israeli Embassy in Washington, where newly installed Ambassador Gilad Erdan is trying to solve the mystery of the presidential silence. How come Biden picked up the phone to Jordan’s King Abdullah back in November and has still not called Netanyahu? Nonetheless, assuming the coveted phone call does take place in the coming days, no one has any doubt that despite the unfashionable delay, Netanyahu will leverage it for all its worth, describing to Israeli voters his intimate relationship with the former senator and vice president over some four decades.

Behind the scenes, Israel’s concerns are mounting. Jerusalem noted with concern Biden’s failure to mention neither Israel nor the Iranian threat in his first foreign policy speech, delivered yesterday. And there are other signs as well. Some in Jerusalem are recalling that before being appointed as the Biden administration’s special representative for Iran, Robert Malley expressed criticism over last year’s assassination of Iran’s nuclear program head Mohsen Fakhrizadeh, attributed by foreign media to Israel. Others are pouring over the recent conciliatory statements vis-a-vis Iran emanating from Washington in recent weeks regarding the express US desire to renegotiate with Iran on an amended nuclear agreement.

“Things are not so simple,” another senior Israeli diplomatic source told Al-Monitor on condition of anonymity. “There are complex differences between us and the Americans over the perception of the Iranian threat.” According to the source, at this point Netanyahu has accepted the recommendations of professional aides to wait patiently for the start of an intimate, clandestine dialogue with the Biden administration and avoid public criticism of the president and his people.

Nonetheless, the March 23 elections are looming, and if cornered politically, Netanyahu will presumably abandon his commitment to a calm dialogue with Washington and embark on fiery rhetoric and threatmongering against Iran. Iran has served in the past, and continues to do so, as one of Netanyahu’s strongest electoral cards, and he will not let any possible dialogue with Biden sway him from using it once again. “Eventually, Netanyahu will do whatever he thinks will help him get elected,” one of the prime minister’s close associates said on condition of anonymity.

The source recalled how Netanyahu went behind President Barack Obama’s back, and arranged with leading Republicans to address a joint session of Congress in a bid to scuttle the imminent nuclear deal with Iran — just two weeks before Israel’s March 2015 elections. “The Americans are increasingly concerned now over the Zionist threat rather than the Iranian threat,” the source told Al-Monitor. “Their overriding goal is to calm Netanyahu down. Still, delaying a phone call from Biden may not be the best way to achieve this goal.”

Trust, or rather lack thereof, is the main obstacle to establishing a credible communications channel between the White House and the prime minister’s office. Netanyahu and Biden do, indeed, go back years and have enjoyed a cordial relationship. On the other hand, Netanyahu does not believe a single word the Americans are saying now, especially when it comes to Democrats.

Furthermore, Netanyahu believes most of Biden’s key foreign policy appointments do not augur well for Israel. Many of them served in the Obama administration and were involved in what he regards as the disastrous nuclear agreement with Iran. Netanyahu is preparing for a worst-case scenario. Biden, too, has been fully briefed and realizes what he is taking on once he starts talking to Netanyahu and his people. None of this bodes well for the prospects of relations between the sides, especially since the moderating forces on the Israeli side — Defense Minister Benny Gantz and Foreign Minister Gabi Ashkenazi — will no longer be in office once a new government is formed.

Officials in Jerusalem believe the Jan. 31 declaration by Secretary of State Anthony Blinken that Iran was just months, and possibly weeks, away from obtaining sufficient fissile material for a bomb were exaggerated and deliberate. According to Israeli diplomatic and security sources, Blinken knows that the figure he mentioned was imprecise and relates only to fissile material and not to Iran’s ability to manufacture a nuclear warhead and install it on a delivery vehicle. They believe Blinken’s declaration was intended to provide a convincing rationale for a speedy return to negotiations with Iran and perhaps even a nuclear agreement, as if to say that the new administration was saving the world and rolling back Iran’s ambitious nuclear program.

Netanyahu’s people were underwhelmed by Blinken’s forecast, to put it mildly. Israeli security officials are more concerned by the gaps in perception with the Americans. “Generally speaking, the Americans want to get out of the Middle East as fast as possible,” an Israeli security source told Al-Monitor on condition of anonymity. “They do not view a nuclear-threshold Iran as a threat or danger; they have the capabilities of a world power and a different timetable than ours. For us, Iran as a threshold state is very dangerous and a nuclear-capable Iran is an existential threat, whereas America can handle both options. It has different capabilities, its distance from Iran is far greater and its triggers are completely different.”

That's why Israeli officials are convinced that the faster Israel engages with the new US administration on the issue, the better. “Preparations have begun and feelers have already been put out there,” the second senior Israeli diplomatic source admitted. “Our problem is that the Americans have started putting out feelers to Iran, at the same time. We are actually entering a race … and no one knows how we will emerge, given the current administration. It will not be simple, in any case.”