Israel campaigns against the US rushing to negotiate with Iran

A report issued by the Israel Defense Forces about Iran two years away from a nuclear bomb was designed first and foremost to calm the American sense of urgency over negotiating with Tehran. 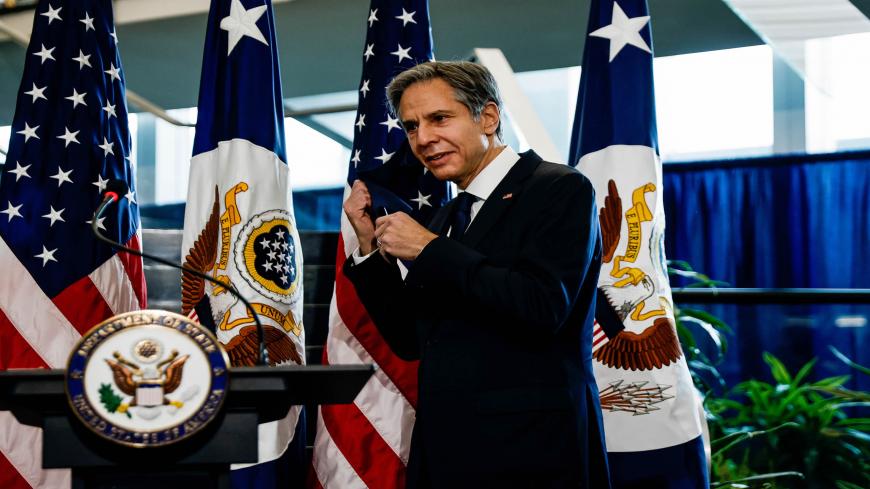 Newly confirmed US Secretary of State Antony Blinken removes his face mask to speak during a welcome ceremony at the State Department, Washington, Jan. 27, 2021. - Carlos Barria/POOL/AFP via Getty Images

A few days after US Secretary of State Antony Blinken said Iran could be weeks away from obtaining sufficient fissile material for a nuclear bomb, Israel’s annual intelligence assessment presented a completely different forecast. According to the report compiled by the Military Intelligence Directorate, Iran is at least two years away from nuclear breakout capability. From the moment it decides to enrich uranium to a 90% level, military intelligence Chief Maj. Gen. Tamir Hayman told reporters on Feb. 9, Iran will need two years to arrive at a bomb.

His assessment appears to provide a direct response to Blinken’s remarks in yet another round of a US-Israeli intelligence-diplomacy duel being conducted in recent weeks mostly behind the scenes. Blinken’s comments hardly assuaged Israel’s concerns. On the contrary, they were perceived as an attempt to provide an advance alibi for a possible decision by President Joe Biden on a speedy return to the nuclear agreement between Iran and world powers from which the United States withdrew under the Trump administration.

“Blinken’s remarks were true, but partial,” a senior Israeli military source told Al-Monitor on condition of anonymity, “They only related to fissile material, but not to many other elements required for operational nuclear capability.” The source was referring inter alia to the fact that even once fully enriched, the uranium must still be made into a nuclear warhead, which then requires an appropriate missile and technological abilities to mount it properly for delivery to the target. Iran has yet to reach such capacity. Its nuclear program was dealt a severe blow in recent years and the 2020 assassination of nuclear scientist Mohsen Fakhrizadeh blocked its progress and perhaps even set it back. “It’s not that Israel is sanguine about the issue, but describing the situation as if Iran is on the verge of an operational bomb is incorrect,” the military source said.

Israel’s point is simple: There is no need to run amuck back to the 2015 nuclear agreement. While Israel’s leadership regards that deal as particularly bad, enabling Iran to become a nuclear threshold state under the so-called sunset clause that lifts restrictions on Iran's nuclear enrichment program after 2025, nothing is that urgent. As previously reported, Israel is exerting heavy pressure on the Biden administration to refrain from lifting sanctions on Iran and instead exploit Iran’s current weakness to impose on it a new, improved 25-year agreement that would also limit its ballistic missile capabilities and block its support of terrorism in the Middle East.

“We will present the Americans with all the intelligence that underpins this position,” a senior Israeli defense source told Al-Monitor on condition of anonymity. “The Americans are well aware of the fact that most information regarding Iran originates from Israeli intelligence.” According to this source, professional-level contacts between Israel and the new administration have already begun. “There are no formal teams yet and the process has yet to be launched officially, but the Americans have promised us an in-depth and thorough dialogue before they come to a decision, and we believe that will be the case,” the source said.

Meanwhile, tensions persist on the Israeli-Iranian front. On Feb. 11, jets reportedly bombed Iranian targets on the Iraq-Syria border in a rare daylight raid. Israel Defense Forces (IDF) chief of staff Lt. Gen. Aviv Kochavi hinted Jan. 26 at developments along the Iraq-Syria border. Addressing the Institute for National Strategic Studies, Kochavi said Iranian forces were entrenching on the Iraqi side of the border, turning the area into a frontline arsenal for weapons transports westward to Syria, and from there to Lebanon’s Hezbollah organization.

This week’s raid was attributed by foreign media to Israel, which did not assume responsibility. It joins almost daily activity against Iran’s ongoing entrenchment in Syria. “Israel is determined to continue undermining the precision missile project and to make clear to Iran that its continued entrenchment will exact a heavy toll,” a senior Israeli security official told Al-Monitor on condition of anonymity. The source added that some 800 anti-aircraft missiles had been fired at Israeli military planes in the Syrian arena over the past two years, an unprecedented number in global comparison. “[Syrian] President Bashar al-Assad is paying a heavy price — in cash — for every raid,” the source said.

On Feb. 10, a day before the strike on the Iraq-Syria border, the IDF conducted a force-wide maneuver along Israel’s northern front. Kochavi was among the observers of the drill, codenamed “Lightning Storm,” which was designed to examine the preparedness of the IDF’s 91st Division tasked with defending the northern front against Hezbollah. The IDF said that part of the exercise featured the application of the lessons learned from the recent operational events on the Lebanese border.

This drill also reflects the IDF’s assessment that Hezbollah Secretary-General Hassan Nasrallah is still intent on avenging Israel’s killing of one of his top commanders in an air raid near Damascus last August, but is seeking measured revenge to avoid escalation into a regional war. “Nasrallah cannot afford a war right now,” a senior Israeli military source told Al-Monitor on condition of anonymity. “He is up to his neck in domestic problems in Lebanon, but he wants to tick off the box on his deterrent power vis-a-vis Israel. If possible, Nasrallah would like to hit a single Israeli soldier in order to salvage his dignity, vis-a-vis his own people too.”

The IDF is conducting itself accordingly, maintaining tense, top-tier readiness along the northern border for months but avoiding escalation into war. “Nasrallah has lost 10 fighters over the past two years in friction with Israel,” another senior Israeli security source told Al-Monitor on condition of anonymity. “Four were Lebanese and the rest were militias, but directly affiliated with Hezbollah. Nasrallah knows this figure but he does not want to set the region on fire. He does not need a war now.”

The IDF’s drill included various scenarios, possible responses and the potential cost Israel would exact from Hezbollah should it harm its soldiers. The IDF is apparently on the same page as Nasrallah. Both sides, it seems, do not seek a conflagration, as both aim for a delicate balance of strike and counterstrike, while preserving each side’s national dignity and not giving either side reason for an exaggerated response. Despite their mutual hostility, the IDF and Hezbollah have come to know each other well over the years and have learned to keep within the confines of a complex equation with minimum friction. In this sense, Nasrallah is one of the most convenient enemies Israel has ever had. “He keeps his word, he is pragmatic and measured, and he knows who he is dealing with,” a senior Israeli military source told Al-Monitor on condition of anonymity. “He is no longer a pawn on the Iranian chessboard. He has his own interests and set of considerations, and his moves are easy to read. Wish it were the same on all other fronts.”