Netanyahu fears that Biden as president would renew Iran deal

Prime Minister Benjamin Netanyahu maintains a friendly relationship with US presidential candidate Joe Biden, but fears that if elected, President Biden would return to talks with Iran. 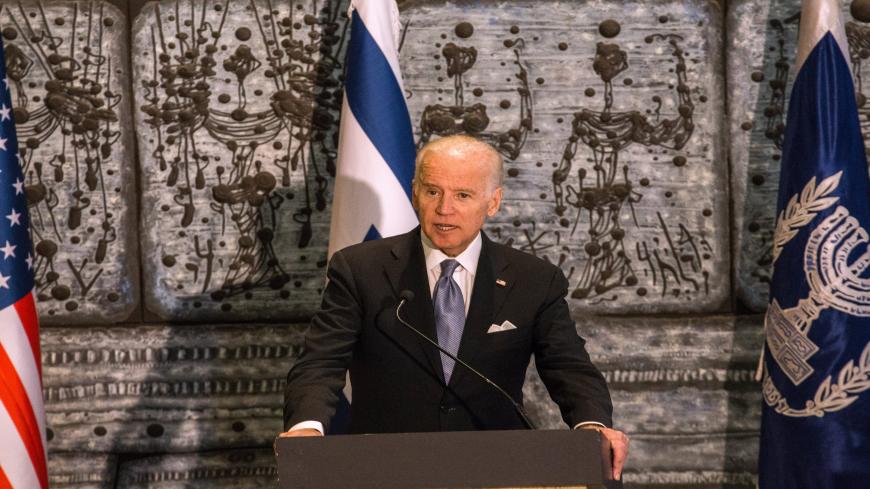 US President Barack Obama dispatched his deputy Joe Biden on an official visit to Jerusalem in March 2010, hoping to achieve a breakthrough in the stalemate between Israel and the Palestinians. A few months earlier, Israel had declared a freeze on construction in West Bank settlements, but negotiations were stalled. Biden, considered a veteran and proven Israel supporter, was supposed to nudge Prime Minister Benjamin Netanyahu into a series of goodwill gestures toward the Palestinians in order to cajole them back to the table.

As the visit began, Biden stopped for a solemn tour of the Yad Vashem Holocaust memorial, a customary stop for all official state guests. At the same time, the district planning commission announced approval for the construction of some 1,600 housing units in a Jewish neighborhood in predominantly Palestinian East Jerusalem. Although Jerusalem had not been included in the settlement freeze, the timing of the announcement even as Biden was bowing his head in memory of 6 million murdered Jews was perceived as a punch in his face.

The Americans were furious. Obama, according to his aides, “was the angriest we have ever seen him,” a senior White House official said. Then-Secretary of State Hillary Clinton recommended cutting short Biden’s visit and recalling him to Washington at once. Obama was undecided. The phone lines at the White House, State Department and Biden’s Jerusalem hotel suite were sizzling. Eventually, it was decided that the visit would continue, but Biden was two hours late for a festive dinner at the prime minister’s residence. The next day, on a visit to Ramallah, Biden told Palestinian President Mahmoud Abbas that the delay had been deliberate.

Following that humiliating incident, the already troubled relations between Netanyahu and Obama deteriorated into a deep crisis, with Clinton reading Netanyahu the riot act in a phone call that lasted for over 40 minutes over the incident. The Americans presented Netanyahu with a series of ultimatums, warning that unless they were met, the United States would take “unprecedented” steps against him. Essentially, Netanyahu won. He failed to accede to most of the demands, sending his people to negotiate with the Americans, and did what he does best — he launched a war of attrition. The crisis ended without any significant sanctions against Israel, and Netanyahu laughed last and best. This coming January, he could find Biden having the last laugh.

Looking back, a senior Israeli source speaking on condition of anonymity told Al-Monitor, “The fact that it was Biden — a distinct, consistent and stable Israel supporter who does not tend to angry outbursts and hasty moves — was what saved Netanyahu from a true fiasco.” The officials involved at the time in the Jerusalem-Washington channel — Middle East envoy Dennis Ross, US Ambassador Dan Shapiro, Israeli Ambassador to the United States Michael Oren and adviser Ron Dermer — still believe the identity of the vice president at the time was instrumental in getting US-Israel relations back on track.

In the old days, the pro-Israel American Israel Public Affairs Committee lobby would have given Biden top marks for his pro-Israel positions. “His record is not good or satisfactory,” a senior source in the organization told Al-Monitor on condition of anonymity. “It’s perfect. You could not find a single significant vote at which he did not deliver and prove his commitment to Israel’s security and prosperity.”

However, these descriptions were valid for the era that preceded Donald Trump’s presidency. We are now at a completely different ballgame. The current president has dismantled all the paradigms relating to support for Israel and placed almost all senior Democratic lawmakers at a distinct disadvantage. Trump upended the US policy of the past half century that rejected the legitimacy of the settlements. Almost overnight, he turned Israel’s staunchest Democratic friends into what many Israelis jeeringly call “leftists.”

Paradoxically, Biden and Netanyahu have maintained a close, flourishing personal relationship for decades, ever since Netanyahu served as the deputy chief of mission at the Israeli Embassy in Washington (1982-84) and Biden as a young 10-year Senate veteran from Delaware. Although Biden was a classic Democrat and Netanyahu a distinct Republican, they became good friends and have remained so. Netanyahu could hardly have hoped for a better Democratic president nominee, which is not the case with his vice presidential candidate Kamala Harris.

Netanyahu is not alone. Biden knows, respects and keeps in touch with all Israel’s former prime ministers. Ehud Barak and Ehud Olmert both praise him at every opportunity and maintain a close relationship with him. “His support for Israel is natural and clear,” a senior Israeli diplomatic official told Al-Monitor on condition of anonymity. “He does not need any persuading. On the other hand, as far as the settlements are concerned, his position is still the traditional one of pre-Trump administrations. However, unlike other Democrats, who often harshly criticize Israel and preach to it, Biden will always make do with a friendlier question or comment. He will say something like, ‘Why don’t you reexamine this,’ but he will not deliver a harangue.”

Biden’s possible move into the White House in January 2021 was the catalyst for Netanyahu’s declared plans to impose Israeli sovereignty on West Bank Samaria settlements before his biggest Washington catch slips away. Meanwhile, he has had to bury that dream, but is praying for a Trump victory that would allow him to revive it. And if Biden wins? “We will not mourn and we will not be keen," a senior political official in Jerusalem told Al-Monitor on condition of anonymity, “We have been through worse disasters. The settlement issue is far less troubling than the Iranian one.”

Indeed, US policy toward Iran is the rhinoceros in the room. Israeli officials are investing significant efforts in convincing Biden’s current and future team on this issue, which Israel views as existential. The US “maximum pressure” policy is yielding fruit and pushing Iran up against the wall. Netanyahu and his associates are concerned that Biden might replace that policy, reduce tensions, pacify Iran with a goodwill gesture and renew negotiations on a nuclear agreement.

If you ask Netanyahu, such an option is disastrous. Senior defense officials — the military chief of staff, the Mossad chief, the head of Military Intelligence and commander of the air force — are not so sure. “Iran as a signatory to a nuclear agreement is a far less dangerous Iran than the current one that has been violating the deal because the Americans withdrew from it,” a senior Israeli defense source told Al-Monitor on condition of anonymity. “If Biden is sufficiently skillful in reaching an upgraded, longer term nuclear agreement, it would not be such a bad deal."

Either way, Netanyahu’s associates know that Biden is no Obama. A veteran Israeli diplomatic source told Al-Monitor on condition of anonymity, “Biden knows how to exert force and knows the importance of being willing to do so. He grew up in a tough neighborhood, he knows the Middle East and he is not naive like Obama was at the time.”

Israel hopes to make the best of a Biden presidency — if that indeed happens — keeping Iran’s feet to the fire so that the regime is not allowed to evade sanctions without signing a new nuclear agreement, more persuasive than the previous one, or risk continued paralyzing economic pressure. Work on that task is already underway. Where Iran is concerned, Israel does not rely on miracles or coincidences.