How Israeli senior officials deal with an unpredictable Trump

The decisions by President Donald Trump to pull out of the Iranian nuke agreement, and recently to exit Syria, worry Israeli senior officials. 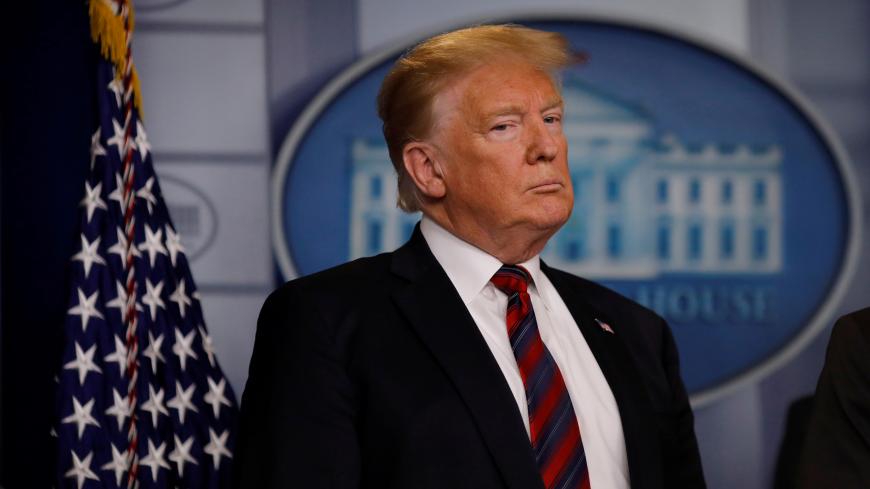 US President Donald Trump speaks to reporters about border security in the Briefing Room at the White House in Washington, DC, Jan. 3, 2019. - REUTERS/Carlos Barria

President Donald Trump will mark two years in the White House this month, a milestone that sounded unbelievable at the time but has been a dream come true for Prime Minister Benjamin Netanyahu. Netanyahu spent 11 years in office with Democratic US presidents Bill Clinton and Barack Obama, who — to put it mildly — did not appreciate or believe him and waged a constant war of attrition against him over the settlements he approved in the West Bank. Finally, there is a Republican on the scene — and what a Republican! Netanyahu and the entire Israeli political right welcomed Trump ecstatically. But did their expectations pan out?

Initial indications were promising, with growing pro-Israel declarations at the United Nations and a presidential visit to Israel in May 2017 that was greeted with sweeping enthusiasm. Things peaked with Trump’s decision to pull the United States out of the nuclear agreement with Iran and move the US Embassy to Jerusalem. If we add to all of the above the pro-Israel advocacy by former US Ambassador to the UN Nikki Haley, who is more popular with Israelis than most of the local politicians, we get a dream come true, a state of affairs that transcends all expectations and a golden age in general.

Over the past six months, however, trouble seems to have emerged in paradise. If one sets aside the settlers and the impressive control wielded by Ambassador Ron Dermer over Trump’s circle and Netanyahu himself — who calls Trump “my friend” at every opportunity — one finds other views, too. These are especially evident within Israeli defense, intelligence and diplomatic circles, where people examine Trump’s conduct from up close on a daily basis, try (to no avail) to understand his modus operandi and policies, and are extremely worried about things to come.

The first indications of Trump’s shifting policy came with his surprising announcement of a speedy US troop pullout from Syria for no obvious reason. It was followed by the Pentagon’s refusal to allow Israel to sell Croatia upgraded F-16 fighter jets and Trump’s latest amazing comment that as far as he was concerned, the Iranians “can frankly do whatever they want” in Syria. All of this, along with the tense wait for Trump’s long-touted “ultimate deal” plan for Israeli-Palestinian peace, is raising the level of concern for many in Israel. “With this president,” a senior defense source told Al-Monitor on condition of anonymity, “anything could happen. For good and bad. There is no well-thought-out policy, no clear pattern of behavior, no orderly decision-making. You wake up each morning hoping for the best.”

“As strange as it sounds,” a senior diplomatic source told Al-Monitor on condition of anonymity, “generally speaking, Trump’s policy is a continuation of Obama’s, only with a different style and means. Obama wanted to pull out of the Middle East, and Trump does too. The US interest remains as it was: to return home. That has not changed and will not change. The difference is in the Tomahawk missile strike [against Syria] that Obama scrapped and Trump carried out. That’s all, and also in style. We knew,” the source added, “that Trump would leave Syria. You have to know how to listen to him. And we are now dealing with it.”

Israel is not at ease and finds hard to accept the US withdrawal from Syria. From a military standpoint, the American presence is marginal. In terms of diplomacy and psychology, it holds tremendous importance. The very US presence curtailed Russia’s influence in Syria and imbued the pro-American players — including Israelis, Kurds and others — in the arena with self-confidence and provided them with tail winds. It also greatly benefitted Israel’s ongoing military activity in the Syrian arena against Iran’s entrenchment there. Netanyahu has in recent days exerted pressure on the White House, and he now claims he had elicited a promise from the president of a gradual rather than an immediate withdrawal from Syria. Some in Netanyahu’s circle believe Israel should apply more aggressive pressure, including the mobilization of the president’s evangelical political base, to reverse Trump’s decision.

But Netanyahu hesitates. Despite his friendship with Trump and his obvious influence on him, no one ever knows where Trump has drawn his red lines and when they will be crossed, turning the president into an anti-Israel troll — as has been the case with quite a few US allies over the past two years.

“In general,” a senior Israeli diplomatic source told Al-Monitor on condition of anonymity, “Trump’s impact on our area is dramatic and disquieting, not always in our favor. He blew off the Palestinian issue, ignited violence in the Gaza Strip with the embassy move and made an enemy of [Palestinian President] Mahmoud Abbas, who has lost all trust in the peace process. He even shook up Saudi Arabia with his famous sword dance and by making [Crown Prince Mohammed bin Salman] the be-all and end-all. This all ended with the killing of [Saudi journalist Jamal] Khashoggi on Oct. 2, 2018, and the continued massacre in Yemen. We have to ask ourselves where this is leading and prepare for every eventuality.”

And we have yet to mention the most explosive, sensitive and crucial issue, which is Israel’s campaign against Iran’s nuclear program and its entrenchment in Syria. “The US pullout from the nuclear agreement was received here with great enthusiasm,” another defense source told Al-Monitor on condition of anonymity. “But there is still no bottom line, and this could go in worrying directions.” The source added, “The Iranians stopped [the nuke program] when they were two years away from the bomb. Now they are still there, but they are hesitating. They are trying to pave a road for themselves around the sanctions. If they fail, they could consider going back to enriching uranium or even forge ahead quickly with a bomb in order to present the world with a fait accompli of the North Korean variety.”

Israeli intelligence, which had slightly eased its focus on Iran for the sake of monitoring the Iranian entrenchment in Syria, was obliged recently to restore resources, means and attention to monitoring the suspended nuclear program and related developments. Iran’s Supreme Leader Ayatollah Ali Khamenei is presumably debating which way to go. Should he instruct his people to renew limited uranium enrichment and shorten the distance to nuclear capability from two years to one or even order a “storming” by his forces?

Israel, as mentioned, is monitoring the situation. It is concerned not only about developments in Tehran, but also about the goings-on in Washington. No one in Israel will say so on the record, but there are scenarios according to which the Iranians make such a move and Trump simply ignores it, just as he is ignoring developments concerning his negotiations with North Korea.

“Our big fear is that Trump will lose interest at some point and say that the Iranians can do whatever they want with their nuclear program and he wouldn’t care, just like he said this week about the Iranian entrenchment in Syria. We have to be prepared for that, too,” a high-level security source told Al-Monitor on condition of anonymity. “In the Trump era, we simply have to be ready for anything and not be surprised by any scenario.”