US withdrawal from Syria leaves Israel alone in the campaign against Iranian entrenchment there. 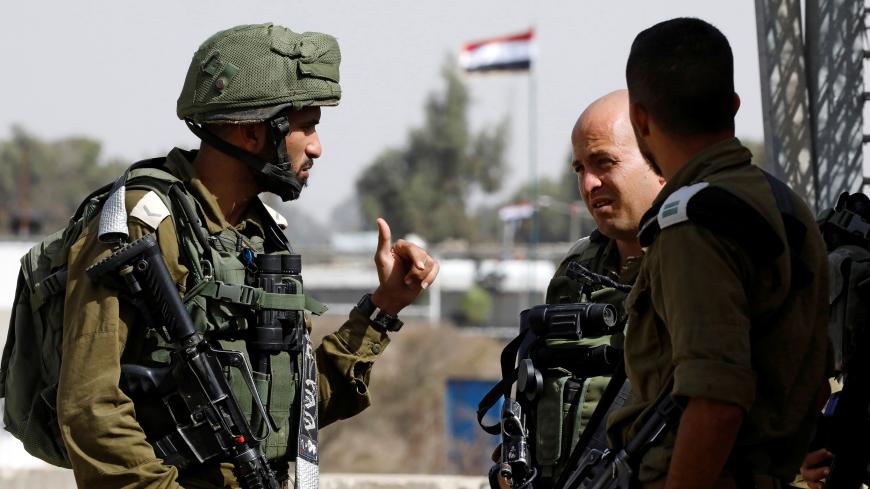 Israeli soldiers chat as they stand near the Quneitra crossing in the Golan Heights on the border line between Israel and Syria, Oct. 15, 2018. - REUTERS/Amir Cohen

If it were possible, Prime Minister Benjamin Netanyahu would have given one of his sharpest and most fiery speeches against President Donald Trump. It was the first time Netanyahu felt a hint of missing Trump’s predecessor, President Barack Obama. “Imagine to yourself what he would have done to Obama,” a minister in Netanyahu’s government told Al-Monitor Dec. 19 on condition of anonymity, “if he had announced an exit from Syria without prior warning and in outrageous opposition to the interests of the United States, its allies and the whole world. Netanyahu would have gone to speak before both houses of Congress; he would have sicced [pro-Israel lobby] AIPAC [the American Israel Public Affairs Committee], [American billionaire Sheldon] Adelson, the Conference of Presidents [of Major American Jewish Organizations] and everyone else on the president. He would have said that the president directly harms Israel’s security. The problem is that it’s not Obama, it’s Trump. Thus, all that Netanyahu could do is have a polite phone conversation with the president and announce that Israel will continue to act to ensure its security in Syria with American backing."

The prime minister was warned in the past year more than once that an American exit from Syria is in the cards and could happen at any given moment. Chief of Staff Gadi Eizenkot, like the heads of Israeli intelligence, knew that Trump was seeking an excuse to enact his campaign promise and spare himself the punishment of the Middle East. Netanyahu put all sorts of pressures on the White House in the course of the year and hoped that the evil decree would be canceled or at least postponed. This week, he understood that he was wrong in hoping so.

Until this week, Netanyahu enjoyed his ally Trump’s victory and arrival at the White House. Netanyahu had everything going for him: He got an American Embassy in Jerusalem, he got the Americans to pull out of the nuclear agreement with Iran, and he greatly expanded the American diplomatic umbrella spread over most of Israel’s whims in all forums. But this week, Netanyahu paid the first installment on the price of the president’s unstable personality, uncontrolled impulsivity, and disordered and illogical policy.

“It’s unbelievable,” said a senior Israeli intelligence source to Al-Monitor on condition of anonymity. He added, “The president did it in opposition to all of his advisers, associates and senior staff.” The source is correct: In recent months, senior Israeli figures at various levels received repeated and varied affirmations and promises from Trump’s senior staff. Everyone spoke with the same language: The American presence in Syria is essential, there’s no intention of leaving Syria in the near future, and even if there is an exit, it won’t happen without America exacting a proper diplomatic price for its exit that would be tied to the effort to distance Iran from Syria and to safeguard the interests of Israel. This week, all of these promises expired with the thrust of a single presidential tweet. With them, several of the senior staff who made those promises expired as well. Defense Secretary James Mattis announced his resignation, which surprised no one in Jerusalem. The surprise happened a few days earlier.

Seemingly, there’s no significant operational advantage to Israel’s security in the 2,000 American military personnel scattered between northern Syria and the Al-Tanf triangle (on the Syria-Iraq-Jordan border). In reality, the Trumpian withdrawal move holds destructive potential for Israeli strategy. “To our great fortune,” an Israeli military source told Al-Monitor on condition of anonymity, “our successes against the Revolutionary Guard [Iranian Revolutionary Guard Corps, or IRGC] and the Iranian entrenchment in the last two years brought us to a place where it would be more convenient and easier to deal with the ramifications of the American exit.”

This diagnosis is correct, but only partially. No one in Israel doubts that the hasty, not to say hurried, American exit is happening at the worst time one can imagine. It very much defers the possibility that Israel would indeed succeed in preventing Iranian entrenchment in the Syrian sphere.

Trump didn’t even try to get to some kind of package deal with the Russians to “sell” his exit in exchange for distancing the Iranians or to leverage the event. He’s leaving for free, in defiance of the interests of his closest allies, in defiance of logic, in defiance of the detailed plans of all of his advisers. “That’s what Trump is like, for good and for bad,” one of the prime minister’s senior advisers noted this week with sadness to Al-Monitor on condition of anonymity. He added, “Up to now we’ve experienced mostly the good; now the bad has arrived, and all that’s left for us is to hope that it isn’t a coming attraction for the real bad that is to come, but an isolated flash that won’t repeat itself.”

In fact, the Israeli headache has to do mostly with the American exit from the area of the border triangle at Al-Tanf. The American base there was stuck in the throat of the Iranians, Russians and Syrians. The intersection of borders at Al-Tanf is a strategic spot, and the stars and stripes that flew there prevented the IRGC from expanding their weapons shipments heading for Damascus and Beirut by land. What did get through, according to the Syrian news agency Sana, was attacked by the Israeli air force using the American presence as a deterrent and declarative leverage. Now it’s all gone.

“Trump essentially gave [Russian President Vladimir] Putin the keys to Syria,” admitted a senior Israeli security source who spoke on condition of anonymity with Al-Monitor this week. The source added, “The problem is that he did it utterly for free. Considering the fact that he’s an experienced and hardened businessman, it’s strange, worrisome and depressing.”

Israel doesn’t have the privilege of being sad or protesting. Now the IDF is trying to form an operational response to the American exit. “On the day-to-day operational level,” said a senior Israeli officer to Al-Monitor who chose to remain anonymous, “we’ll continue acting as normal, the [Israeli] air force won’t change its patterns of activity, and our struggle against the Iranian entrenchment will continue as usual.”

The real problem belongs to the strategic, diplomatic and global arenas. “We can still deal with it,” said a senior Israeli source to Al-Monitor who spoke on condition of anonymity. “The Jordanians are having a much scarier experience right now. The American presence at Al-Tanf was an essential life preserver for them. They fear that the exit from there would allow the Islamic State to reboot itself; they [the Jordanians] would be abandoned and left to the graces of the forces acting in the sphere,” saiad the source. To the Jordanian’s good fortune, the one force that can’t leave the region is Israel, and the strategic alliance between these two nations will have to continue to grow tighter in face of the mounting challenges.

Israel at the end of this week is different from the Israel at the beginning of the week. For the first time, Jerusalem is paying for Trump’s presidency in hard currency, in cash and at a high price. “Up to now we knew that Putin’s promises regarding Iran dissolve and don’t hold water; now we know that we can’t depend on Trump either,” another Israeli diplomatic source told Al-Monitor on condition of anonymity, adding,“We’ll have to continue to depend only on ourselves.”