Bolton, Pentagon rallied to keep al-Tanf base in Syria

After Donald Trump's surprising tweet in late 2018 that all US troops would return from Syria, John Bolton says he spoke out against the abandonment of the US garrison at al-Tanf. 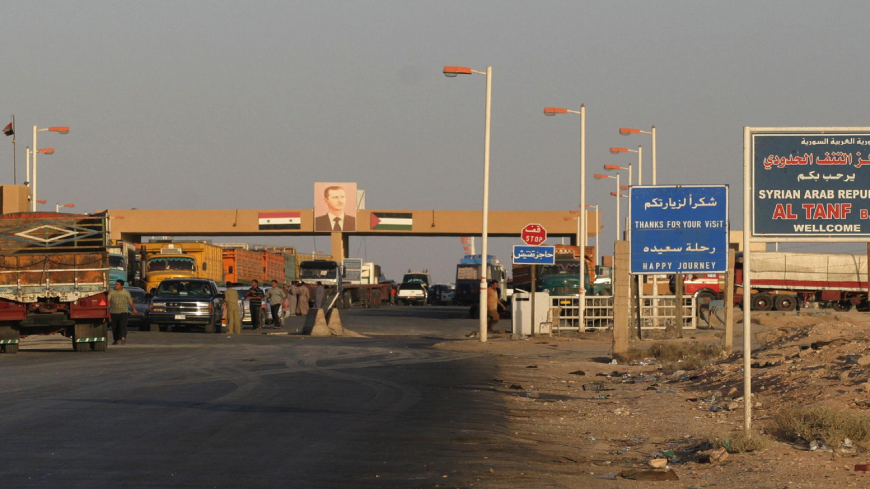 Cars wait at a checkpoint at the Syrian-Iraqi border point of al-Tanf, 167 miles northeast of Damascus, Syria, Oct. 2, 2004. - LOUAI BESHARA/AFP via Getty Image

In his tell-all expose, former United States national security adviser John Bolton suggests he played a central role in convincing President Donald Trump to keep a remote Special Forces outpost in Syria’s eastern desert after the president unexpectedly ordered all US troops out of the country in December 2018.

According to Bolton’s new book, during a meeting with Trump at Iraq’s al-Asad air base on Dec. 26, 2018, the former national security adviser prompted Lt. Gen. Paul LaCamera, then-commander of the US-led coalition against the Islamic State (IS), to voice support for keeping al-Tanf garrison.

“LaCamera, to his credit, recovered quickly and said we should hold on to [al-]Tanf,” Bolton writes. “Trump responded, ‘Okay, and we’ll decide the schedule on that later.’”

A week earlier, and without warning, Trump had tweeted that all US troops would imminently come home from Syria, where they were fighting IS and occupying key territory to help Washington shape the political outcome of the war. Trump’s tweet caught allies, adversaries and the top levels of his own administration by surprise, sending senior American officials scrambling to find ways to slow down the withdrawal.

But Bolton may be taking too much credit, according to former US officials who told Al-Monitor that some senior military commanders already intended to keep the base.

The morning after the president’s tweet, CENTCOM Commander Gen. Joseph Votel held a meeting in which it was made clear the United States would not abandon al-Tanf, according to a former US military official familiar with the discussions. “That was before Bolton could even communicate with them,” the former official said on the condition of anonymity.

Israeli Prime Minister Benjamin Netanyahu and Jordan’s King Abdullah II also called and requested the administration not give up the base, according to another former US defense official.

After that, the president and senior administration officials started treating al-Tanf as an exception to the withdrawal from northeast Syria, the official said.

Statements and leaks over the following month seemed to suggest the administration prioritized its military presence at al-Tanf over that in northeast Syria, where US Special Operations were finishing off IS and preventing a war between Turkey and the coalition’s Kurdish partner forces simply by being there.

Trump eventually reversed his withdrawal orders, twice, but the military has since pulled more than 1,500 troops from northeast Syria, according to official numbers. Yet some 150 US Army Special Forces and National Guard troops remain at al-Tanf to this day, though coalition allies have long since withdrawn.

The Pentagon says they are there to keep pressure on IS, but the Tanf zone was largely surrounded on the Syrian side in late 2017 by pro-Damascus forces and Iran-linked militias, which the US military is not authorized by Congress to strike unless acting in self-defense. The few hundred rebel fighters they still train at al-Tanf have no obvious combat mission other than to guard the area's desert roads from intruders.

The Defense Department considered abandoning the base in 2017 and even offered it to the Russian government, which declined in the apparent hope of taking Deir ez-Zor’s oilfields instead.

Trump administration officials then requested al-Tanf be “repurposed” as part of their effort “to counter or roll back” Iran’s influence in Syria, according to a third former US official. What that exactly meant became a matter of internal discussion.

While there is no evidence the military has used al-Tanf to launch planned attacks on groups other than IS, the United States has invoked self-defense to strike forces that have encroached on the 55-kilometer (34-mile) deconfliction perimeter around al-Tanf.

Bolton avoids such details in the book, only noting: “Control of [Al-]Tanf neutralized a key border crossing point on the road between Baghdad and Damascus, which forced Iran and others to cross from Iraq into Syria at a more distant border crossing to the north.”

“Iran was my main concern,” Bolton writes, adding, “Besides, why give away territory for nothing?”

Forcing Iran’s proxy militias through the bottleneck of Iraq’s al-Qaim border crossing to the north has been a boon for Israel’s fighter jets, which have used al-Tanf as a safe waypoint on their routes to bomb Iran-linked militias in Syria, according to one former defense official.

“They like to use our air corridors because [Syria’s] air defenses can’t tell the difference until it’s too late,” the former official said, adding that Israeli pilots only use the route after requesting and receiving US permission.

The cooperation increased after former Defense Secretary James Mattis resigned in December 2018 following Trump’s withdrawal order. The Pentagon had denied Israeli access in the past due to Mattis’ concern that Iranian or Russian casualties in Syria may trigger retaliation against the United States on the ground, the official said, noting that the Israelis appeared to take the concern seriously.

James Jeffrey, the Trump administration’s Syria envoy, alluded to the cooperation before Congress last May, saying the US was supporting Israel’s airstrike campaign in Syria “1,000 percent.”

During the hearing, Jeffrey described Israel as “under immediate threat by Iranian forces in Syria.”

“If they can be allowed to embed themselves in that country with long-range systems, they would be able to open a third front on Israel next to Lebanon and Gaza,” he said.

Keeping al-Tanf was the simplest way for the Trump administration to ensure the Islamic Revolutionary Guard Corps Quds Force’s overland route to Lebanon was as perilous as possible, former officials said.

“We never said that we would withdraw from al-Tanf,” Jeffrey told Congress last year. He added, “We were withdrawing ground forces, but we were keeping other military and diplomatic presence.”

Keeping the site also assuaged Jordanian leaders’ concerns about Shiite militias near the kingdom’s northern border. But hundreds of millions of US government dollars toward building Jordan’s border security have since reduced the need for al-Tanf, especially as some Jordanians warm to the idea of reopening economic ties with Syria.

Moreover, it is not clear that al-Tanf has achieved its adopted objective. Despite a recent optimistic statement by Ambassador Jeffrey, Iran is signaling that it intends to stay in Syria. Hezbollah leader Hassan Nasrallah claimed in a video last week that the group had obtained precision-guided missiles that can strike “any location in occupied Palestine.”

Meanwhile, deploying to the isolated garrison has been a headache for some of the highly trained but lightly armed American troops.

“I’ve never been to a war zone where I can walk over to the border, take a shot, and start a legitimate conflict and make the news,” a US military source with experience at al-Tanf told Al-Monitor.

The source said that encountering Syrian army tanks on the horizon during patrols serves as a constant reminder, adding, "You’re kind of just trusting the Air Force at that point.”

“This is the most confusing conflict I’ve ever been in. Iraq was simple," the source added.