The remote Tanf outpost has been quiet for years, but Iran's pinprick provocations may once again be targeting the base, which plays a key role in Washington’s effort to obstruct Tehran's influence. 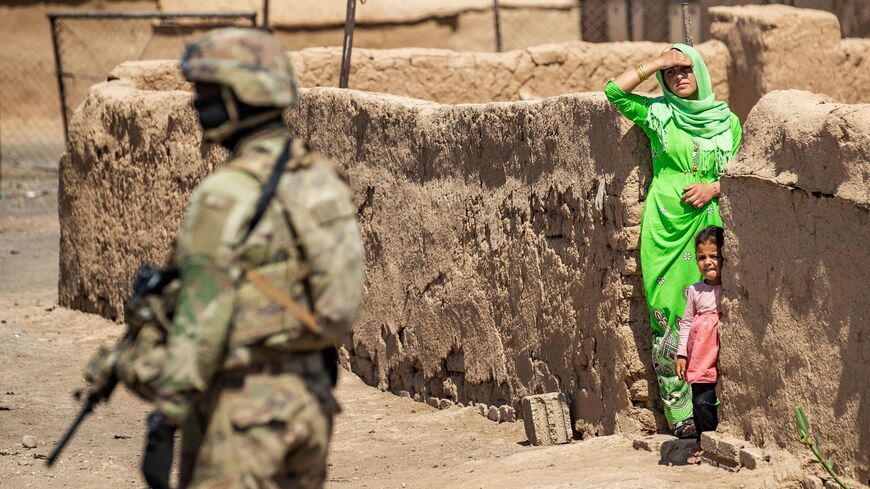 A US soldier stands by as a local woman and child look on during a US military patrol in Rumaylan in Syria's northeastern Hasakeh province on June 22, 2021. - DELIL SOULEIMAN/AFP via Getty Images

A remote US military outpost in the southern Syrian desert was hit by a suspected drone attack on Wednesday evening, according to a US official.

The base houses US Special Operations forces and a local rebel militia known as Maghawir al-Thawra (MAT). No US casualties have been reported, according to US Central Command, which oversees US troops in the Middle East. MAT officials did not return Al-Monitor’s request for comment by publication time.

CENTCOM confirmed the incident in a statement released later on Wednesday, describing it as "a deliberate and coordinated attack" in the area of al-Tanf.

Initial reports received by CENTCOM said the attack involved unmanned drones and indirect fire, a category which can include rockets, mortars and artillery. "All US personnel have been accounted for," the statement read.

"We maintain the inherent right of self-defense and will respond at a time and place of our choosing," CENTCOM's statement read.

US troops were vacated from the area of the strike, which Pentagon officials knew was coming in advance due to “solid” intelligence, according to a US official.

The multiple drone strikes targeted buildings typically inhabited or frequented by US troops, including a barrack, the official said.

The Rukban civilian official said no members of the displaced persons camp had been injured in the incident, adding that witnesses at the camp said they saw unmanned aircraft and two fires on the horizon in the direction of al-Tanf.

The US maintains more than three thousand troops in Syria and Iraq combined in the wake of the multinational war against the Islamic State.

No group has yet claimed credit for the incident. The US has yet to attribute blame, but the attack comes as Washington's response to Iran's policies in the region has heightened tensions between US troops and local Iran-backed militias.

Militias with ties to Iran’s Islamic Revolutionary Guard Corps have a heavy presence in eastern Syria. They remain in the war-torn country in support of Syria’s President Bashar al-Assad.

US military and intelligence sites in Iraq and Syria have been hit by a series of drone attacks by suspected Iran-linked groups in recent months, raising concerns within the highest levels of the Biden administration.

President Biden has twice authorized retaliatory airstrikes against Iran-backed militias on both sides of the border since taking office in January, with questionable deterrent effect.

Al-Tanf had not been targeted by a drone since 2017. Today’s attack suggests Iran’s pinprick provocations may once again be aimed at the site, which serves as a key node in Washington’s post-IS strategy to counter Iran’s influence in the region.

More than a hundred US troops and their local militia partners remain at Tanf under the shared mandate of fighting the Islamic State, but major US-led combat operations against IS in that part of Syria wrapped up years ago.

Instead, the base passively occupies a vital border crossing thought by US policymakers to be coveted by Iran-backed forces and the Assad regime.

US forces in Syria are not allowed to strike at fighters other than IS and Al-Qaeda unless acting in self-defense. The US-led coalition has relied on that authority to deny pro-regime forces access to the area in the past.

Meanwhile, Israel has conducted hundreds of airstrikes against Iran-linked targets in Syria in recent years, some with US intelligence support. The covert campaign aims to prevent Iranian missiles and drones from arriving within range of the Israeli border.

Al-Tanf has played a role in that effort, used as a waypoint by Israeli fighter aircraft that fly northeast along the Jordan-Syria border before entering Syrian airspace.

Last week a spate of Israeli strikes targeted Iran-backed militias in Syria, drawing vows of retaliation from the groups. One of the strikes near Palmyra also killed a Syrian pro-regime soldier and injured three others, Syria’s defense ministry claimed.

The Syrian regime said the alleged Israeli airstrike last week originated from the direction of al-Tanf.