Netanyahu gambles on Trump against Iran

Israel supports the American intention of increasing sanctions against Iran, though pushing Iran against the wall could fire up the Hezbollah front against Israel in Syria. 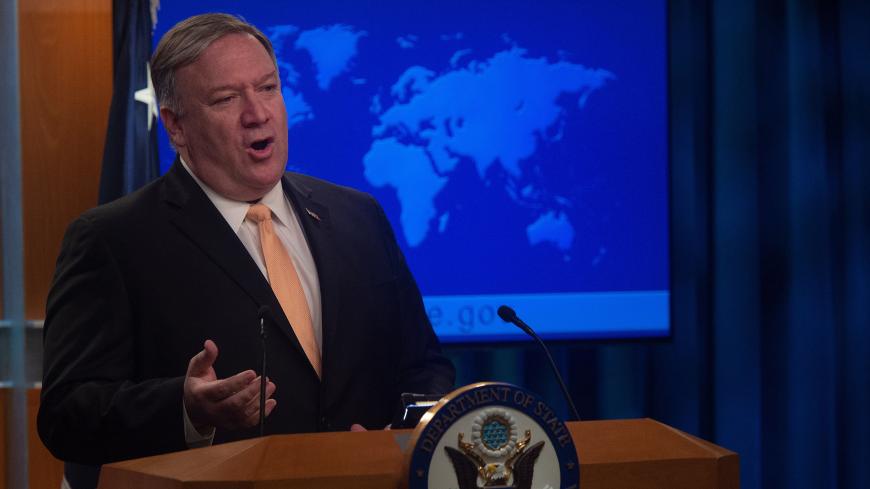 US Secretary of State Mike Pompeo speaks during a press conference at the US Department of State, announcing it will no longer grant sanctions exemptions to Iran's oil customers, Washington, April 22, 2019. - ANDREW CABALLERO-REYNOLDS/AFP/Getty Images

The war waged between Israel and the United States and Iran is rapidly approaching its final stages. The time frame everyone is focusing on is November 2020, when the American presidential elections will take place. The Iranians pray that the Democrats will win and that the new president will return to the nuclear agreement, as this would remove President Donald Trump’s sanctions that are strangling the Iranian economy. Israel prays for the reverse scenario: Trump’s continued rule is vital to the implementation of Prime Minister Benjamin Netanyahu’s grand plan. According to Netanyahu’s aspired scenario, Iran will either renounce its nuclear arms dream or exchange the ayatollah rulership. (Actually, Netanyahu hopes and prays that both of these things happen.)

Two events this week led the sides to the final stretch.

The first event was the implementation on April 22 of the final stage of Trump’s paralyzing sanctions — the waivers granted by the United States to several countries that have continued to purchase Iranian crude oil will come to an end. The goal: to lower the export of Iranian oil to zero, or close to zero, thus bringing the entire regime to its knees.

Simultaneously, Iran’s Supreme Leader Ayatollah Ali Khamenei has replaced the veteran commander of the Islamic Revolutionary Guard Corps (IRGC), Maj. Gen. Mohammad Ali Jafari, after holding the position for more than 11 years. Israel is keeping a close eye on these developments, and dampens any enthusiasm. “This is not an expression of Iranian weakness,” a high-placed Israeli security official told Al-Monitor on condition of anonymity. “Jafari is worn out in his current position; his accomplishments were only lukewarm. So they turned him into a scapegoat and blamed him for the failed treatment of the [recent] flood disaster and its victims, so that it would be easy to replace him.”

According to Israeli sources, Jafari’s replacement, Gen. Hossein Salami, 59, is highly energized and is straining at the leash to prove himself. This does not bode well for the tension between Iran and its adversaries, including Israel. “On the other hand,” said the security official, “according to assessments, most of Salami’s efforts will be directed at the strategic Strait of Hormuz, with the tightening of the American embargo on Iranian oil — and not directed at our region.”

Until now, none of the sides involved has blinked. The Americans, led by Trump, continue the sanctions at a rapid pace. And Israel, according to the foreign media, continues to attack Iranian targets in Syria, to operate against Iran’s precision missile project and its entrenchment in Syria and in Lebanon, and to wage a widespread, secret campaign against Iran. Meanwhile, on the other side, Ayatollah Khamenei continues to back the IRGC and mainly Gen. Qasem Soleimani, the head of the Quds Force, and his hard-line approach to Israel and the West. The Reformist side, led by Iranian President Hassan Rouhani, has been defeated by the winds of revolution — at least, at this point in time. The impression is that all the players in this game of Russian roulette are equally stubborn, and the question is: Who will blink first?

“Now we should focus on the Strait of Hormuz,” the security source continued. “That area has now become extremely explosive and sensitive because the Iranians know that they are at risk of losing what remains of their oil export market. They already issued statements in the past that if they are unable to export oil, they won’t allow others to do so either.”

According to intelligence sources, the United States has a contingency action plan should the IRGC attempt to close the Strait of Hormuz. “It is impossible to close this strait hermetically,” another senior Israeli security source told Al-Monitor on condition of anonymity. “A world power could open a route or a sea lane in the strait, without too much effort.” The question remains whether the Iranians have the mettle to carry out such a blatant act, in express defiance of the United States and its allies. We will get an answer in the course of the current year.

Despite the prevailing euphoria over the continued breakdown of the Iranian economy and the American resolve, there are those in Israel who are concerned over the sequence of events. Trump and Netanyahu keep upping the ante and increasing the stakes for everyone involved.

“The date that is on everyone’s mind is 2020, the US presidential elections,” a senior Israeli source, who is involved in discussions on the issue, told Al-Monitor on condition of anonymity. “The goal of the Iranians now is to survive until the US elections, and hope that Trump will be replaced. Then they could return to what they would consider ‘acceptable’ negotiations with the West.” What will they do if Trump remains in place? “Under those circumstances, they will have to choose between two bad options,” he said. “They could give in and sign a new agreement that will include the cessation of terror activities and ratcheting up of supervision regarding nuclearization. The other option is to make a break toward military nucleus, ignoring Israeli and American fury."

The most difficult question as far as Israel is concerned is what will happen if Trump loses the elections. Netanyahu scored numerous achievements in anti-Iranian policy and in recruiting Trump to the Israeli side. However, in doing so, he also turned American support for Israel from bipartisan support to mainly Republican support. Most of the Democratic presidential candidates are committed to returning to the nuclear agreement if they are voted into the White House. And, for the first time ever, several of the Democratic candidates did not bother to attend this year’s policy conference of the American Israel Public Affairs Committee in March.

“Netanyahu’s achievements can disappear overnight, if Trump loses the elections. This would place Israel in a much worse situation than it was in the Obama era,” warned the senior Israeli official who is involved in the discussions.

These kinds of preparations for Judgement Day are not limited to Israel: People in other Middle Eastern countries are working on alternatives and quick response reactions, in the event that the Iranians do nuclearize. For example, Saudi Arabia has greatly ratcheted up its nuclear activities recently in the nuclear research domain as well as in the military domain. In fact, the nuclear issue has aroused much worry not only in Israel (and neighboring countries), but also in a number of Western capitals.

One way or the other, Netanyahu will have no choice. As someone who operated on behalf of the last two Republican presidential candidates — Mitt Romney and Trump — Netanyahu will probably only increase his efforts in this direction in the next US presidential campaign. And this, again, will continue to raise the ante of the Israeli bet — not only in the struggle vis-a-vis Iran, but also with regard to Israel’s most important strategic asset of all: its alliance with the United States of America.