Trump may chicken out on Iran, frets Israel

Israeli security officials are getting worried that escalating tensions between the United States and Iran could spill over into Israel through an attack by Hezbollah on the northern border. 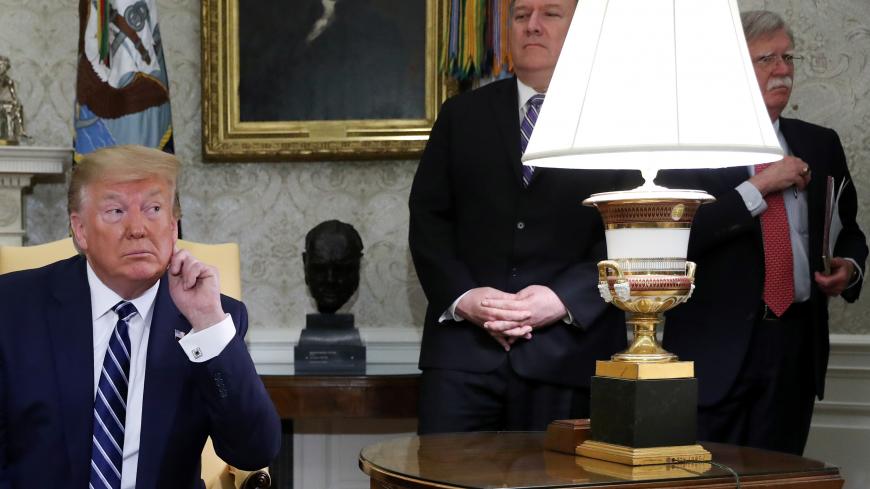 US President Donald Trump listens to questions during a meeting with Canada's Prime Minister Justin Trudeau as Secretary of State Mike Pompeo and White House national security adviser John Bolton look on in the Oval Office of the White House in Washington, US, June 20, 2019.

Up until several weeks ago, Israel assessed probability of a direct or indirect flare-up with Iran in one of the Israeli-Iranian conflict arenas as low. Until recently, Israel believed that Iran did not intend to find itself confronting the Israel Defense Forces, and that was the reason it had not responded to attacks attributed to the Israeli air force against Iranian targets in Syria, and that was also why its proxy Hezbollah was displaying restraint vis-à-vis Israeli activities against it. According to this assessment, Iran was investing most of its efforts in arranging terror attacks against Israelis in the West Bank and in encouraging and helping the Palestinian Islamic Jihad in Gaza to oppose any cease-fire deals with Israel and to continue stirring up trouble along the Gaza border.

In light of the rapidly escalating tensions between Iran and the United States in the Gulf it is in Iran’s best interest to keep upping the ante and fomenting instability along one of its fronts with Israel. A blowup, whether on the Golan Heights border with Syria or along the border with Lebanon, would give Iran a reason to keep defying the United States. Prime Minister Benjamin Netanyahu convened the diplomacy-security cabinet on June 16 and 19 for the first time in months. The last thing he needs now is a commission of inquiry after the fact blaming him for failing to prepare and to share his preparations for the growing prospects of war with the interim caretaker government he heads.

Israel has also shifted position substantively as regards the conduct of US President Donald Trump. On June 20, for the first time in ages, unnamed Israeli analysts directed veiled criticism at Trump’s “weakness” on Iran, accusing him of being insufficiently “offensive” and slamming his confused reaction to the downing of the costly US drone over the Gulf. The report that Trump had ordered a military strike on Iranian targets only to rescind his order as the fighter jets were en route only sharpened the criticism by “diplomatic sources” described as close to Netanyahu.

It's a scenario we predicted several months ago: Trump would get cold feet once the moment of truth was at hand, lose interest or choke and avoid action. “The fact that the US did not respond to the drone downing and the attack on the tankers in the Gulf conveys weakness and boosts the self-confidence of the Revolutionary Guard,” an Israeli diplomatic source told Al-Monitor on condition of anonymity. “The president does not realize that in order for pressure on Iran to succeed, the Iranians must believe that he is capable of attacking. If they understand he is playing a game of chicken with them, they will manipulate him just as they did President [Barack] Obama.”

However, not everyone in Israel is of the same mind. Defense officials are being cautious and saying little on the Iranian issue at this point. They were not wild about the short June 20 video of Netanyahu against the backdrop of Israeli and American flags declaring support for the United States after the downing of the drone and calling on the rest of the world to follow suit. Many in Israel’s top security echelons still remember that Israel was perceived as having goaded the United States into the disastrous 2003 invasion of Iraq, which in hindsight caused immense strategic damage to Israel’s interests, too.

“We must not embroil ourselves in this story. We have to walk away from the display window and lie low,” a former IDF officer told Al-Monitor on condition of anonymity. “It is not wise to be perceived as trying to set the region on fire and sic Trump on [Iranian Supreme Leader Ali] Khamenei. In the medium and long run, it could cause us grave damage.”

Meanwhile, the IDF is intensifying its preparations for a possible confrontation with Iran or one of its proxies such as Hezbollah or other Shiite militias, the Syrian regime, Islamic Jihad along the northern front and elsewhere. It conducted an extensive military drill this week focused in the north and including many regular and reserve troops. Various arms of the IDF’s commando division also took part in the exercise, as did air and ground forces. The United States has reportedly approved the sale of sophisticated mid-air KC-46 refueling tankers to Israel for the first time, which will significantly extend Israel’s strategic capabilities and make it easier to attack Iran if the need arises. The signals are designed to disabuse Gen.s Hossein Salami and Qasem Soleimani, the commanders of the Islamic Revolutionary Guard Corps and the Quds Force, respectively, of the idea they can strike Israel to cause the United States pain. Netanyahu visited the drilling troops this week and warned, “I say to our enemies: The IDF has an immense destructive power. Do not test us.”

Iran has a well developed tool kit on several fronts with Israel. Its numerous and varied options for provocation were discussed and analyzed in great detail at various Israeli defense forums this week. “The Iranian goal is to prove to the Trump administration that Iran has extensive potential to harm US interests and allies in the region — that it is able to take a significant toll on President Trump for his continued tightening of sanctions and chokehold around Tehran, and that it has no intention of being scared off or letting go,” a senior Israeli defense source told Al-Monitor on condition of anonymity. “The Iranians are experts at brinkmanship and their maneuvering capabilities on the edge of volcanoes are impressive. The most troubling thing as far as Israel is concerned is that right now they have nothing to lose.”

In light of these developments, there is growing concern in Jerusalem that at the decisive moment, Trump will step back. “Trump can disengage and we will be forced to stay here with all the burning fronts vis-à-vis Iran,” a former top IDF official told Al-Monitor on condition of anonymity. “The problem is we have no way of foreseeing what will happen and what the president will do. Unlike the Iranians, Trump is a lot less predictable and where he is involved, any scenario is possible. We will have to prepare for them all.”