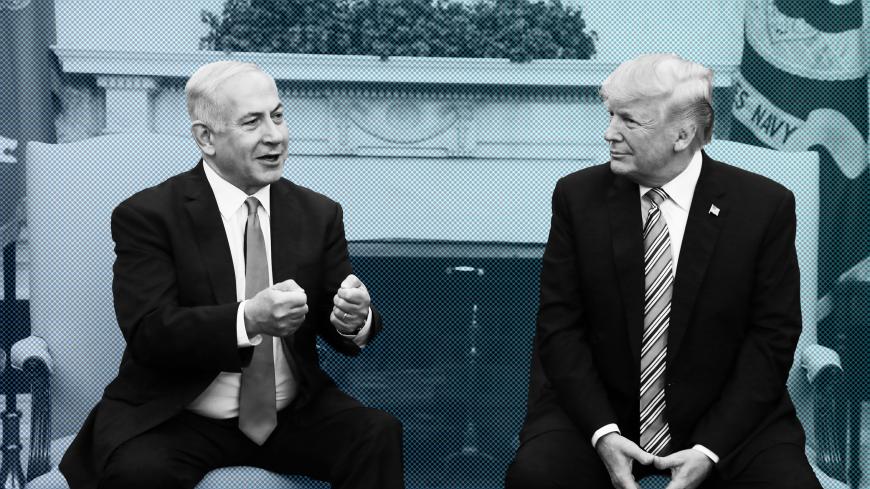 Talking to the press after his meeting last March with US President Donald Trump, Prime Minister Benjamin Netanyahu made a seemingly minor comment that, in the course of his meetings with Trump, he had attained a very important achievement for Israeli national security. This comment is now emerging as more dramatic than it originally seemed.

Since then, rumors have circulated regarding the nature of this achievement. By now we are pretty confident that in those talks, Netanyahu received an explicit promise that Trump would “go all the way” regarding the Iran nuclear agreement. According to a senior Israeli political source speaking on condition of anonymity, “Trump sounded more determined than ever, convinced even more than Netanyahu, in the vital and urgent need to amend the agreement or simply abandon it and bash the ayatollah regime.”

According to sources privy to the contacts between the two, Netanyahu exploited the fact that Trump has the heart of a businessman who is out to make a profit, in order to prove that the nuclear agreement with Iran contains no possible benefits for the West or the free world. Since then, Trump continues to use the same rhetoric and repeat that the advantages of the agreement to the United States are minimal and not enough to justify the US removal of sanctions over Iran.

After the meeting with Trump, Netanyahu’s associates scattered additional hints. “In the near future, we’ll see changes of personnel in the administration,” said one Netanyahu associate, on condition of anonymity. “Trump is going after Iran with everything he’s got. He won’t blink or vacillate or take prisoners. He understands the magnitude of the danger.” This, to Israelis, is tantamount to having all of their dreams come true, all the more so for Netanyahu, and all in one decisive fell swoop. Finally, Netanyahu receives an American president who views the Iranian danger exactly as he does, eye to eye. Sometimes even more than him. The recent appointments of John Bolton as national security adviser and Mike Pompeo as secretary of state serve to advance Netanyahu’s dreams.

But this is exactly the reality that makes Europe anxious. (To be more precise, it makes France, Germany and Britain anxious.) Trump met with French President Emmanuel Macron on April 24, followed by Angela Merkel on April 27. Even the British are making their opinions known. Europe is trying to guard the nuclear agreement with all its might, but is worried that it is not strong enough. And Trump, despite the fatherly affection he demonstrated to Macron, showed no signs of caving in during the meetings between the two of them over the weekend. The American demands for fixing the agreement remain: imposing real sanctions on the Iranian missile program, ratcheting up the monitoring of the nuclear facilities and deepening transparency. The Americans also insist that the “sunset period” — the period when nuclear restrictions end, in about a decade — be corrected.

According to the Americans, the agreement in its present form has no remedy for the sunset period. The Americans are demanding that an immediate sanctions mechanism be put in place without having to get authorizations from anyone, if and when it emerges that the Iranians are renewing uranium enrichment to a military level. The Europeans understand that such a mechanism will never be approved by Tehran, and they are trying to create “fuzzier” rules. Trump refuses. As things stand now, no insurance company would insure the lifespan of the agreement between Iran and the powers.

The Europeans are trying to massage Trump’s ego by telling him that they agree in principle over a need to correct certain aspects of the agreement.

The Europeans, who are stuck between a rock and a hard place, have decided to change their tactics. It became known to Al-Monitor that the current European pressure on Trump does not focus on the essential aspects of the disagreement, but on the tactical realm. The Europeans want Trump to sign on May 12 the waiver over continued removal of American sanctions on Iran. This would facilitate continued efforts and contacts between Washington and Europe regarding “amending the agreement.” The Europeans are trying to massage Trump’s ego by telling him that they agree in principle over a need to correct certain aspects of the agreement. But they warn him that refusal to sign could generate rapid escalation and a domino effect leading to a breakdown of the agreement and, perhaps, even a renewed Iranian rush toward the bomb. “Give us time, we’ll figure it out together,” the Europeans say. Trump listens, but doesn’t show any signs of capitulation. Behind him stands a new, militant White House team, and behind them stands Israel. At the moment, the hawks have the upper hand. Netanyahu tells Trump in the various contacts they share that time is running out. This is the hour of decision. The Europeans are trying to drag you into the swamp. It’s now or never.

This is a poker game between two opposing sides with four players. On one side is Trump and behind him is Israel in the supporting actor role. On the other side is Iran, with the Europeans as supporting actors. The poker game is occasionally replaced by Russian roulette, in which everyone threatens everyone else. It’s not clear who doesn’t have bullets in their revolvers and who does. But everyone is afraid of Trump.

As if we don’t have enough dynamite to set the Middle East on fire already, another mysterious aerial attack took place in Syria overnight, on April 29. This time, a military target was destroyed near Aleppo’s military airfield, and the Iranians reported on Monday morning, April 30, the loss of 18 combat soldiers in the assault. (Tehran later denied this report.) This attack was carried out only hours after Defense Minister Avigdor Liberman said at the Jerusalem Post's annual New York conference that Israel "will maintain freedom of operation in all of Syria,” adding that it will prevent Iranian presence there at all costs. At the same time, Netanyahu sat in Jerusalem with Secretary of State Pompeo, who again declared that the United States would quit the Iran nuclear agreement if it is not amended.

This predicament is one of the most dangerous and volatile crises that the region, perhaps the entire world, has known in recent years. It is characterized by the bluster of all the antagonists and the weakening of the checks and balance system. Neither Netanyahu nor Trump look like they intend to wink first. Mossad chief Yossi Cohen is responsible for the wealth of intelligence on Iranian activities that Israel transfers to the West on an almost daily basis. He was recently quoted as saying that he is “100% certain” that Iran remains militarily committed to developing its nuclear program.

This argument, which Israel has stated before and keeps stating, proves Netanyahu’s theory: Iran lacked good faith in the recent years, so it must not be allowed to keep secret any of its contacts with the International Atomic Energy Agency.

Netanyahu's "nuke speech" on April 30 was a once-in-a-lifetime performance. It was designed to fortify the position of Trump in the battle against Europe. Netanyahu didn’t produce a smoking gun, but he did offer conclusive proof regarding the extent of the Iranian lie.

What will Iran do now? In light of Tehran's uncompromising rhetoric in recent weeks, we need to take note of the riots and disturbances that continue on a daily basis in Iran's large cities. Last week, a corpse was discovered in Iran that is suspected of being the body of Reza Shah, the first shah of Iran. Afterward, a video clip reached the West showing tens of thousands of Iranians shouting “Reza Shah.” Such a video clip, taken in a stadium in the heart of Tehran, only emphasizes the fact that the ayatollah regime is under siege. We must now hope that this internal conflict won’t turn bloody. In that case, the ayatollah regime will turn its anger also toward the sieging powers on the outside.