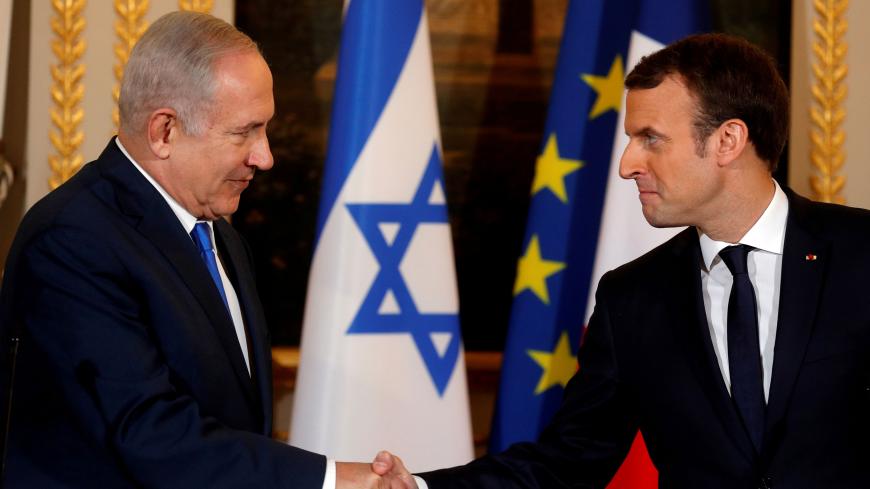 French Foreign Minister Jean-Yves Le Drian had been well-briefed by his advisers before arriving in Jerusalem on March 25. His one and only mission on his first official visit to Israel was to clarify the extent to which France objects to destroying the Iran nuclear deal. The only way to go about that, Paris believed, was to send in the heavy guns. To that effect, the French foreign minister had backup. On the same day (March 26), in the same place (Prime Minister Benjamin Netanyahu’s office) and with the same objective in mind, German Foreign Minister Heiko Maas paid a separate visit.

Anticipating Netanyahu’s rejection of the common European stance, Le Drian and Maas were careful not only to defend the agreement with Iran, but to also extend feelers on a possible compromise in the form of sanctions against Iran’s ballistic missile program. Israeli sources told Al-Monitor that both ministers emphasized defense of the agreement in their meetings with Netanyahu. Any hopes Israel might have had of driving a wedge between Germany and France on the Iran issue proved futile.

Le Drian was, however, confronted with a determined Israeli prime minister who knew exactly how he wanted the conversation between them to develop. Netanyahu spoke first at a small joint press conference before the meeting, setting the tone. After offering condolences on the March 23 terror attack in Trebes, Netanyahu went on to talk about Iran.

The meeting with Le Drian was not very long. Netanyahu spent the morning being questioned by police, so time was scarce. Le Drian expressed his concerns about the Iran agreement and tried to ascertain how Israel might react to proposed sanctions on Iran’s missile program, but he received little that might be considered reassuring from Netanyahu.

The prime minister made no secret of his assessment that US President Donald Trump will renege on the Iran agreement on May 12. Yet instead of delving into the issue, Netanyahu focused on other things: the common fight against global terrorism, the fight against anti-Semitism (against the backdrop of the March 23 murder in Paris of an 85-year-old Jewish French Holocaust survivor) and the cross-cultural Israel-France Season, scheduled to be run June to November.

Netanyahu is heavily invested in Trump, but this does not mean that he will neglect the rest of the world, especially Europe. He knows that if there is one European leader that Trump likes, it's French President Emmanuel Macron. He also knows that if Trump’s Middle East peace plan fails, the European Union is likely to step in. Uri Savir wrote on March 4 in Al-Monitor that the European Union, galvanized by Macron, has already started preparing its own peace plan. With Brexit in the works, the Brits have little say in European foreign policy. Meanwhile, Germany and France are more in sync these days than they have been in many years. Thus, European foreign policy is being championed and shaped by the pro-EU Macron, especially on the Iranian file.

Both Jerusalem and Washington share this assessment of Macron, although he has so far failed to change Trump’s mind on Iran; he also fell short in this regard on the Paris climate agreement in 2017. Given this, the cross-cultural Israel-France Season might offer Netanyahu a golden opportunity. He has already confirmed his attendance at one of the main events at the Grand Palais in Paris in June. Associates of the prime minister say that the international timetable works in his favor. If indeed Trump nixes the Iran deal in May, then Netanyahu will arrive in Paris as a winner. In fact, by June, the Elysee might be preoccupied with finding creative solutions to saving the dialogue with Tehran, but this is mere speculation.

For the moment, Netanyahu is trying to channel dialogue toward what unites Israel and Europe, instead of what divides them. From his point of view, every terror attack on French soil reinforces their common battle against Muslim extremists (which, in Netanyahu's view, includes Palestinians who attack Israelis).

An Israeli Foreign Ministry official told Al-Monitor on the condition of anonymity, “Netanyahu has little to lose by refusing to react to the issue of sanctions on the Iranian missile program. If Trump rejects the nuke agreement, then Netanyahu can show his voters a major diplomatic and security victory. If he doesn’t, then the sanctions against the missiles will surely get center stage, which is also positive as far as Israel’s security is concerned.”

Still, Netanyahu’s strategy vis-a-vis partners other than the United States comes at a price. Macron has made it clear that on the issue of Jerusalem, as on the issue of Iran, he does not see eye to eye with “my friend Donald Trump.” On March 7 at the annual dinner held by the Representative Council of French Jewish Institutions, an umbrella organization, Macron said that he considers Trump’s recognition of Jerusalem as the capital of Israel to be “an error” and that France is not going to follow suit.

Netanyahu won’t be able to say no for forever. At some point, he might be forced to choose between folding on Iran or folding on the Palestinian issue.