Israel pays the price for sidelining Europe on the Iranian file

The latest visit of Iranian Foreign Minister Mohammad Javad Zarif in Biarritz indicates that France is willing to offer Israel a respite on the Palestinian issue, but not on the Iranian file. 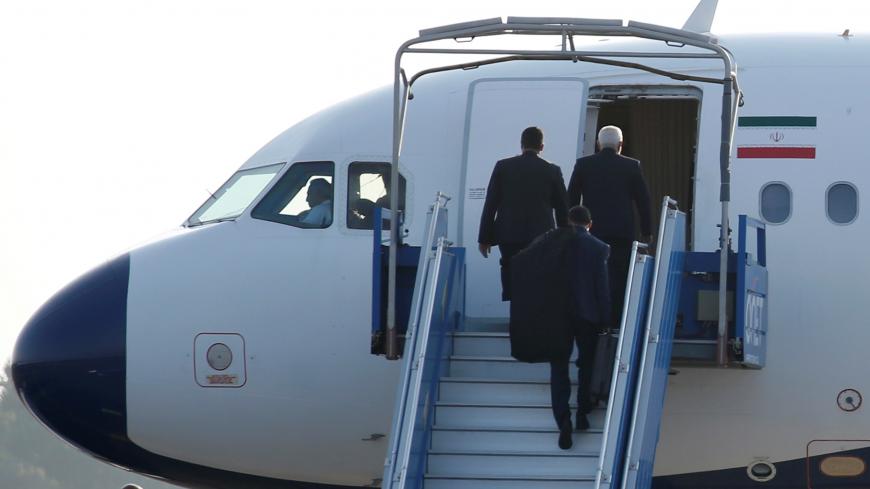 French President Emmanuel Macron did not hide his satisfaction over his Aug. 25 meeting in Biarritz, France, with Iranian Foreign Minister Mohammad Javad Zarif, on the margins of the Group of 7 summit, and the ensuing change of tone by President Donald Trump. Speaking Aug. 27 at the annual ambassadors’ conference in Paris, Macron was cautious but optimistic, hinting that a meeting between Trump and his Iranian counterpart could be in the offing.

Official Israel kept quiet over these latest developments. Prime Minister Benjamin Netanyahu made no public statements, but senior officials fed the local press hints about Israel’s apprehensions should such a meeting materialize. Israeli diplomats were sent out to gather information from the French, but their efforts came too late — much too late. The French train has already left the station.

According to French diplomats, Paris is in constant contact with Washington over many diplomatic and security files, including the Iranian one. And so it is safe to assume that the twist of Zarif’s visit was not that much of a surprise for the White House. Israel, though, is another story, and Paris seems to be reluctant to include Jerusalem in its confidence on Iran.

In prior years, when the nuclear deal was being negotiated, Israel espoused a different approach vis-a-vis the Europeans, and vice versa. At some point it was France, not the United States, that defended the Israeli positions. It was France and its Socialist Foreign Minister Laurent Fabius that pushed for the 2013 interim agreement with Iran that froze part of the nuclear program in exchange for relief from the sanctions imposed by the Western powers. Two years later, in March 2015, Israeli emissaries, including then-Energy Minister Yuval Steinitz, went to Paris and to London to seek support against a draft deal proposed by the Obama administration that Jerusalem considered too lenient.

But over the past three years, Israel's diplomatic priorities changed. Netanyahu made a point of establishing alliances with euroskeptic partners such as Hungary and Poland, sidelining the larger European Union members France and Germany. On the Iranian file, Israel turned to the United States only. The 2018 US decision to withdraw from the nuclear agreement supposedly sealed the fate of the Iranian deal, and Jerusalem downplayed (with some contempt) efforts made by the European powers to revive it or fix it or for the Americans to come back. An Israeli official source told Al-Monitor at the time, on condition of anonymity, that ‘’Trump did our work for us. The deal is dead and no French manipulation could ever bring it back to life.’’

Macron was never invested emotionally in the Israeli-Palestinian issue. So when Paris realized that Netanyahu was unwilling to advance toward a two-state solution, Macron took a step back. His lack of involvement corresponded also to his desire to break up with everything established by his predecessor, Francois Hollande (including the Paris Middle East Peace Conferences), and with Macron's determination to work together with, not against, the Trump administration.

With Trump on Israel’s side, this situation was convenient to Jerusalem. "Macron keeps reiterating that he will wait for the American peace plan to take its course, and so far, the French have not come up with any plan of their own,’’ an Israeli diplomat told Al-Monitor on condition of anonymity.

But what is true for the Israeli-Palestinian conflict is obviously not true for the Iranian file. Given the backdrop of the growing tensions between the United States and Iran in the Persian Gulf, Macron decided to multiply his efforts for conciliation. "We need an audacious diplomacy,’’ he told his ambassadors Aug. 27. Sources at the French Foreign Ministry confirmed that the meeting with Zarif in Biarritz and the American reaction were perceived by the French president as a major diplomatic achievement and as a first possible step toward a solution to the nuclear agreement issue.

Israel is now paying the price of the rift created with France and other countries in Western Europe. Paris calculates that Jerusalem is encouraging the Americans not to find a solution on the Iranian nuclear program. As such, the French move according to their own point of view, that the agreement must be saved. Macron is focusing his efforts on Trump, with Israel practically out of the picture.

When the Socialist Hollande was at the helm, quite a number of Israeli officials qualified him as pro-Palestinian, though this was far from the truth. The doors of the Elysee Palace were open, but the Israelis chose to stay out. With Macron at the Elysee, dialogue with Paris seems even more complicated. The fact that Macron canceled his trip to Israel on the occasion of Israel-France cross-cultural season last year attests to that.

Paris continues to condemn Israel each time the Netanyahu government approves the construction of housing units in West Bank settlements, but Foreign Minister Jean-Yves Le Drian makes few to no statements on such issues. At the moment, France offers Israel a respite on the Palestinian issue, but not on the Iranian file. And this difference is something that Israel has failed to grasp.