Israel fears that if North Korea continues to develop its nuclear arsenal, Iran will no longer agree to restraints on its nuclear program. 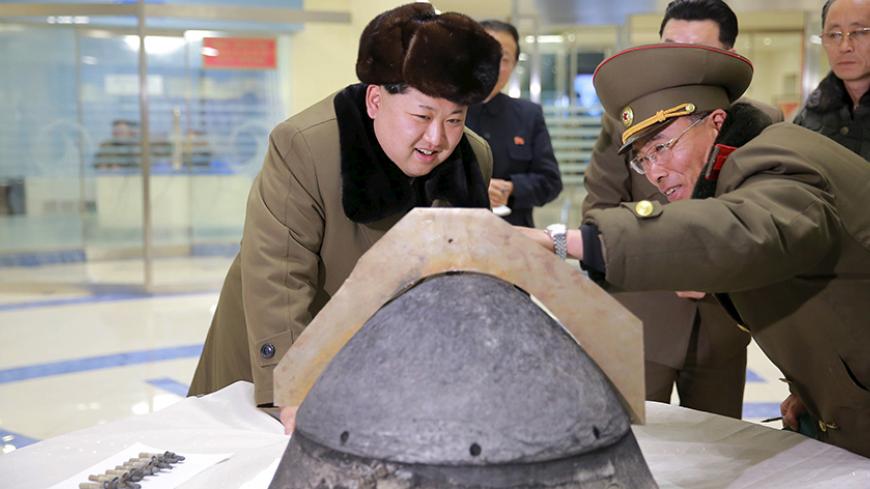 North Korean leader Kim Jong Un looks at a rocket warhead tip after a simulated test of atmospheric re-entry of a ballistic missile, at an unidentified location in this undated photo released on March 15, 2016. - REUTERS/KCNA

Forget for a moment about moving the US Embassy to Jerusalem, US recognition of the settlement blocs, a closed-eye policy on the pace of construction in the territories and the way the United States has been inspired, according to Prime Minister Benjamin Netanyahu, by the separation barriers that Israel built in the West Bank and along its southern border. The one truly important story is North Korea. The most senior sources in Israel claim that this is where US President Donald Trump will be tested. Once the dust settles, the eyes of the world will be watching Trump's steps to deal with North Korea’s accelerated nuclear armaments program. Top Israeli Cabinet members believe that the outcome of Trump's dealing with the North Koreans will determine whether international efforts to prevent Iran from obtaining nuclear capabilities will be a success or whether they will be a resounding failure.

“If Trump succeeds in stopping North Korea, it would be reasonable to assume that the Iranians will get the hint,” one senior Israeli official told Al-Monitor on condition of anonymity. “On the other hand, if Trump repeats the Obama administration’s failures in handling North Korea, the Iranians will take this as a signal that the world will have to concede to them too at some point. It would make no sense if the North Koreans can have a nuclear arsenal and intercontinental missiles that can strike the United States, while the Iranians cannot.”

The overall Israeli assessment is that this issue will be the focus of talks between Netanyahu and Trump scheduled to take place at the White House in February. Netanyahu will make every effort to gain Trump’s recognition of the settlement blocs. He will plead with Trump to move the US Embassy to Jerusalem and portray himself as the president’s closest friend, all in an effort to win public support to counter the wave of criminal investigations he currently faces. The real issue, however, will be Iran as an incarnation of North Korea’s nuclear program. It would be incorrect to think that Netanyahu has forgotten Iran's program, the definitive issue of his past eight years in power.

“Obama’s failure in dealing with the North Korean nuclear issue was a decisive failure,” a senior Israeli security official told Al-Monitor on condition of anonymity. “And it is a failure that could have a snowball effect.” Despite the geographic and ideological distances, Israel is watching North Korea with extreme caution. It is fully aware that the unpredictable Asian nation is developing intercontinental missiles capable of carrying nuclear warheads. It is also worried that the North Koreans, who already have several atomic bombs, are now trying to build a hydrogen bomb.

“Trump must stop North Korea,” a senior Israeli minister told Al-Monitor on condition of anonymity. “While the eyes of the entire world are focused on this task, this is especially true of the North Koreans’ friends in Tehran. There can be no doubt that if Trump fails, the Iranians will also obtain nuclear capabilities. The question is whether Trump is fully aware of how important this issue really is.”

Just as Netanyahu convinced the entire international community about the importance of the Iranian threat, he will attempt to convince Trump to deal with North Korea, which is an extension of the way the Iranians were handled.

What about the nuclear agreement between Iran and the world powers? Israel’s defense establishment believes that it would be difficult to reopen the agreement for revision. Even the Cabinet believes it is a “mission impossible.” In December, sources close to Netanyahu held clandestine talks on the issue with members of the incoming administration and others close to Trump. The Israelis proposed an alternative in which the nuclear agreement is turned into a “trip wire’’ — a deterrence strategy shifting responsibility to the opposing side — in the belief that the Iranians will at some point violate the terms of the agreement. Once that happens, the United States could use the violations as the impetus to restore some sanctions and manufacture a crisis. The Israelis argued that any US violation of the agreement would run counter to the desired result. Trump and Netanyahu will need to have sensitive talks over this particular issue, and in those talks, the name of a third party is likely to come up: Russian President Vladimir Putin.

Israel is worried about Trump’s warm relationship with Putin. As one top Israeli political source told Al-Monitor on condition of anonymity, “The question is who will influence whom? If Putin persuades Trump to soften his attitude toward Iran, it would be a catastrophic strategic development for Israel. If, however, the opposite happens, it would be a positive development.”

There is another subject particularly disconcerting for Israel: Iran’s influence in Syria. Netanyahu is expected to ask Trump to persuade the Russians to prevent Iran from establishing a real presence in Syria in the post-civil war era. “If the [Islamic] Revolutionary Guard [Corps] sets up bases in Syria, if Iran gains ports and anti-aircraft bases there, this would signal a significant deterioration of Israel’s strategic situation,” a senior military official told Al-Monitor on condition of anonymity. “We must make sure that Trump is aware of this issue and all of its implications.”

In general, Israel is concerned about Trump handing Israel a few insignificant candies and toys, like moving the embassy to Jerusalem, while cutting a deal with Putin on the truly consequential issues — Iran's nuclear program and presence in Syria, which could lead to a new conventional front along Israel’s northern border, one that is much more dangerous than previous fronts.

Some in Israel are watching with consternation as the Trump administration takes shape. Almost all of the leading supporters of Israel mentioned as possible candidates for senior positions have been left out of the administration, including former New York Mayor Rudy Giuliani, former UN Ambassador John Bolton and former Republican presidential candidate Mitt Romney. The only real pro-Israel appointment is David Friedman, and with all due respect to the prospective ambassador to Israel, what Israel actually needs is a presence in the Pentagon and the State Department. Instead, it has Defense Secretary James Mattis, who declared that the capital of Israel is Tel Aviv, and Secretary of State Rex Tillerson, who has never visited Israel and has close ties with the Arab world because of his past work in the oil industry.

The euphoria in Jerusalem is dissipating. On Jan. 28, Netanyahu tweeted his support for the construction of a border wall between the United States and Mexico, writing, “President Trump is right.” Although the tweet got him into hot water with the Mexican government and Mexico’s Jewish community, Netanyahu has no real regrets. It is important for him to stay close to Trump and become his best friend as quickly as possible. Only after the two men meet will it be known if this is possible.