Netanyahu maintains battle against Iran deal ahead of UN meeting

The Israeli leadership fears that with the US administration leaving Syria in Russian hands and its inaction toward North Korea, no one will stop Tehran from placing its forces near Israel’s borders. 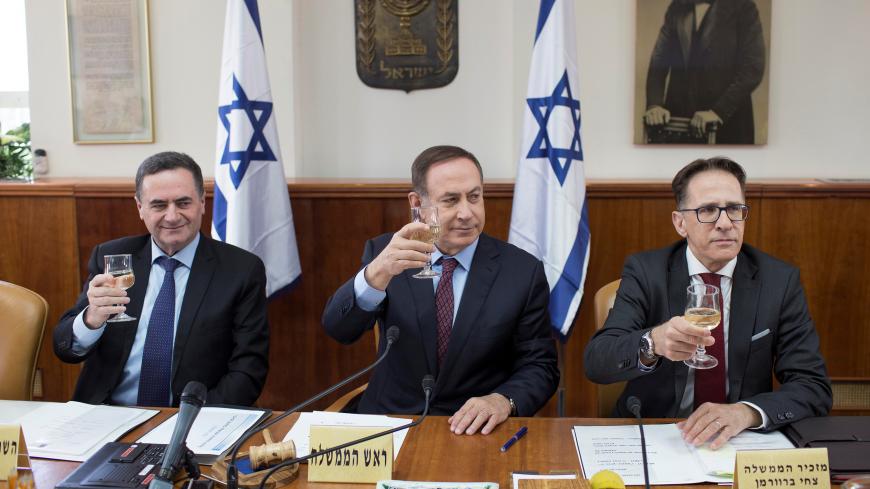 "The prime minister must demand from President [Donald] Trump that he freeze, change or cancel the Iranian nuclear agreement," began Israel's Minister of Intelligence and Transportation Yisrael Katz's speech to the Institute for Counter Terrorism's 17th annual conference in Herzliya on Sept. 11. Katz devoted almost his entire speech to the issue, describing Iran as "the new North Korea." He emphasized, "We need to act now so we won't be sorry tomorrow about what we didn't do yesterday." Katz's comments were quoted extensively by the international press.

Prime Minister Benjamin Netanyahu jumped into the fray the next day. At the start of his meeting with Argentinian President Mauricio Macri, the prime minister told reporters, "Our position is straightforward. This is a bad deal — either fix it or cancel it. This is Israel's position." Netanyahu is expected to highlight the issue in his upcoming meeting with Trump at the UN General Assembly meeting in New York.

While Netanyahu was making his comments in Argentina, Reuters released a contradictory report. It quoted sources in the US administration as claiming that Israel is not asking for the termination of the nuclear deal with Iran and that Saudi Arabia is opposed to the cancellation of the deal. Senior US officials, including Secretary of State Rex Tillerson, hold that the deal should not be touched. Instead, they want to see strategic planning to increase pressure on Iran on issues unrelated to the deal, such as support for terrorism, its ballistic missile project and the precision rocket and missile project in Syria and Lebanon. The Americans hope that this plan will mitigate Israeli concerns.

It will not. Katz's speech, Netanyahu's comments and the Reuters quotes reveal a sharp disagreement between Israel's political and military leadership over the Iranian issue. It is not a strategic argument, either. The top brass of the IDF, Military Intelligence and Mossad all realize that the Iranians have not shelved their ambition to become a nuclear power — nor will they. The difference is that the defense establishment has accepted the nuclear deal as a fact and managed to find certain positive opportunities in it. The IDF has reorganized in accordance with the new situation, and its multiyear planning program "Gideon" has been formulated on the assumption that the Iranian nuclear threat has been placed in the deep freeze for a decade. Senior Israeli defense officials have emphasized the opportunity it affords Israel to deal with other problems, reprioritize and take advantage of this window in Iran's nuclear schedule.

The political leadership, particularly Netanyahu and Katz, sees things very differently. Katz, who meets weekly with the heads of Israel's various intelligence branches, also maintains a close relationship with his American counterparts. He has reiterated his position on numerous occasions, to both Trump's Cabinet and in direct talks with American officials.

Netanyahu is an experienced alarmist who shares this position. So apparently does Defense Minister Avigdor Liberman. Given these circumstances, Israel's military leadership will have no choice but to acquiesce to the position of the political leadership, which is the ultimate authority in the matter. The Sept. 7 bombing of the missile factory in Syria, attributed to Israel, is seen as part of such a strategic response, with Israel trying to send clear messages to the world, the region and particularly to Russia and the United States that it will not accept the situation that is being forced on it along its northern border.

Shortly after Trump's victory in the US election, I predicted that Netanyahu would stress to Trump the importance of dealing with North Korea's nuclearization project as a means of applying pressure on Iran. In background briefings, Netanyahu said that the Iranians watch North Korea and everything happening around it with avid interest. If the United States acts clearly and with determination in dealing with North Korea, Tehran will get the hint.

Jerusalem is panicking over the remarkable events in North Korea and the way that the United States has lost control of the situation as North Korean leader Kim Jong Un rushes toward nuclear armaments. "US impotence in dealing with North Korea is a strategic incident," one Cabinet member told Al-Monitor on condition of anonymity. "We must aim high in our relationship with the United States. There are doubts about the nuclear deal with Iran in the United States as well. The president himself supports canceling or freezing it, but he is surrounded by people who believe that it must be left in place. We must make the implications that this will have on the region perfectly clear to him, and we must do it now."

Israel is following the agreement that is taking shape between Iran and Syrian President Bashar al-Assad with great consternation. That agreement, which is modeled on the agreement between Russia and Syria, would formalize a long-term Iranian presence in Syria. The beginnings of a rapprochement between Saudi Arabia and Iran are also being watched closely by Jerusalem. Reports that the Saudi defense minister visited Israel recently are perhaps related to this development.

Given this situation, Israel is concerned about being isolated regionally, now that the Saudis may be drawing closer to Iran, even if it is by lack of choice. The current US administration is losing interest in the region and stepping away, while Iran is continuing to expand its influence and will be able to jump-start its nuclear program again in eight years. All this will be at the center of discussions in Netanyahu's upcoming meeting with Trump in New York.

Eight months after Trump entered the White House, Israel still does not fully understand what the president hopes to achieve from his policy. In terms of the Palestinian issue, Israel's greatest concerns have been replaced by a certain level of satisfaction as the president's peace initiative and his dream of reaching the "ultimate deal" dissipate rapidly. On the other hand, on the Iranian file, Trump has been a major disappointment to the Israelis. The rushed US exit from the Syrian conflict without blocking Iran's race to the Mediterranean and the Golan Heights are disconcerting to Jerusalem. The same is true of the helplessness that the United States is showing toward North Korea. Normally, it takes a lot less to get Netanyahu to panic.