Israeli intelligence believes that North Korea, Syria and Iran are collaborating on the development of missile systems and nuclear programs. 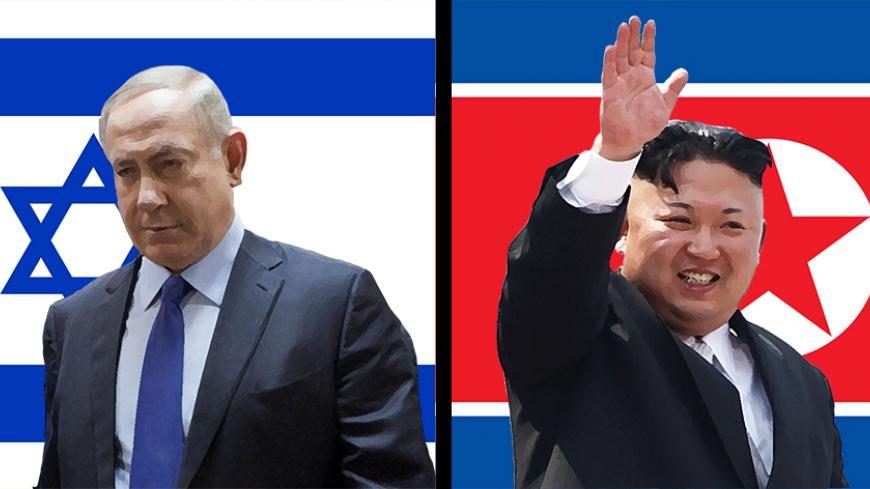 Israeli intelligence believes that the developing crisis between the United States and North Korea will last a very long time and that its potential to erupt into a full-fledged conflict is high. According to this assessment, President Donald Trump will increase pressure on Pyongyang in a series of stages, all the while trying to coordinate his moves with the Chinese as much as possible. In Israel's estimation, Trump used his meeting with his Chinese colleague April 8 to request China's help in bringing about North Korea's disarmament from nuclear weapons. If you fail to do that, Trump told the Chinese leader, we will have to do it ourselves through other means.

It remains unclear as to how much the Chinese will cooperate and provide the goods, and it is even more unclear whether Trump will go all the way and use force, but initial indications regarding China's cooperation are hardly positive. On April 26, the Chinese responded negatively to reports that the United States is planning to deploy a battery of THAAD anti-ballistic missiles in South Korea. As stated in an earlier Al-Monitor article, when Trump first entered the White House, the Israeli assessment was that the North Korean issue would capture first place in the list of issues to which the new administration would be devoting its time and energy.

Politicians in Israel, especially on the right, are thrilled with this development. "As long as the North Korean issue bothers Trump and keeps him busy, the attention he devotes to the Middle East and the Israeli-Palestinian conflict will be limited," one senior Israeli politician told Al-Monitor last week on condition of anonymity. "This serves the interests of Netanyahu and his right-wing government."

The North Korean issue was raised in meetings between Trump and Prime Minister Benjamin Netanyahu, as well as in the three meetings held to date between Defense Minister Avigdor Liberman and his US counterpart, Secretary of Defense James Mattis. In an interview with Walla News on April 25, Liberman said, "The nuclear crisis with North Korea has direct implications for Israel. It is important to realize that the madman from North Korea is the closest ally that [Syrian President Bashar al-] Assad and the Iranians have. There is an axis of evil running from North Korea to Iran, Syria and Hezbollah. Furthermore, we can see the activities of this axis in Yemen and Iraq as well."

He continued, "The goal of these people is to contest stability around the world. We are talking about a radical, insane group. It will have implications for us, too. Every nuclear crisis anywhere in the world impacts the entire world."

Israeli intelligence has evidence that the Syrian nuclear reactor built secretly in Deir ez-Zor — which foreign reports claim was destroyed by the Israeli air force in 2007 — was constructed under North Korean guidance. An International Atomic Energy Agency report from 2011 confirmed this assessment and the fact that North Korean scientists were permanently stationed on site at the reactor, which was supposedly modeled after a similar reactor in North Korea.

At the same time, North Korea also cooperates closely with Iran. Israel believes that Iranian scientists were present at almost all of North Korea's nuclear tests and received briefings on various topics related to them. Iran's Shahab missiles were developed with the active and vital assistance of North Korea and are based on the North Korean Nodong missile. According to Israel, Tehran, Pyongyang and Damascus are completely synchronized and coordinated.

On the other hand, the main reason why developments in North Korea are vital to Israel's national security is that the whole world is watching as this crisis unfolds, with particular attention coming from Tehran. "If Trump perseveres, resulting ultimately in North Korea's nuclear disarmament, it will send a resounding signal, which will be picked up quickly by Tehran," a senior Israeli defense official told Al-Monitor on condition of anonymity. "The Iranians will realize that the Americans have resolve, and that they have zero chances of being allowed to make a nuclear breakthrough once the agreement expires."

The other possibility is that the American effort fails and that Trump's resolve evaporates. This could result in the collapse of global policy against Iran's nuclear program and the growing realization in Tehran that with a little patience and persistence, the world will eventually come to terms with a nuclear-armed Iran.

Israel estimates that North Korea has the capacity to manufacture plutonium-based nuclear weapons, but it is still far from obtaining the technology to install a nuclear warhead on a long-range ballistic missile. As of now, it still does not have any ballistic missiles that threaten the United States. Nevertheless, the assumption is that if the North Koreans are allowed to continue with their accelerated research and development program, they will eventually be able to fire an effective nuclear weapon at the West in general and the United States in particular. "As of now," says one senior Israeli defense official on condition of anonymity, "that must never be allowed to happen, and President Trump knows that."

So far, Jerusalem has expressed considerable satisfaction with US foreign policy in dealing with Iran and North Korea. Political sources claim that last week, one Israeli Cabinet minister said that Trump's election slogan of "American first" had since expired. So far, Trump is having a hard time getting his internal policies off the ground. He has, however, shown determination and leadership when it comes to all the most pressing foreign policy issues.

All of the above has no impact on the Israeli-Palestinian issue. Here too, Trump has shown surprising assertiveness and determination, which was hardly anticipated. In this case of the Palestinian issue, however, Jerusalem hopes that Trump's enthusiasm wears off as quickly as possible. So far, Netanyahu has ordered a freeze on the development of several thousand housing units in the occupied territories that his government approved just a few months ago. That's because right now, no one wants to risk angering Trump.