The nuclear test conducted by North Korea delivers a message to Iran and to other potential customers in the region, writes Alon Ben David: Why work hard to develop a bomb if you can simply buy one off the shelf? 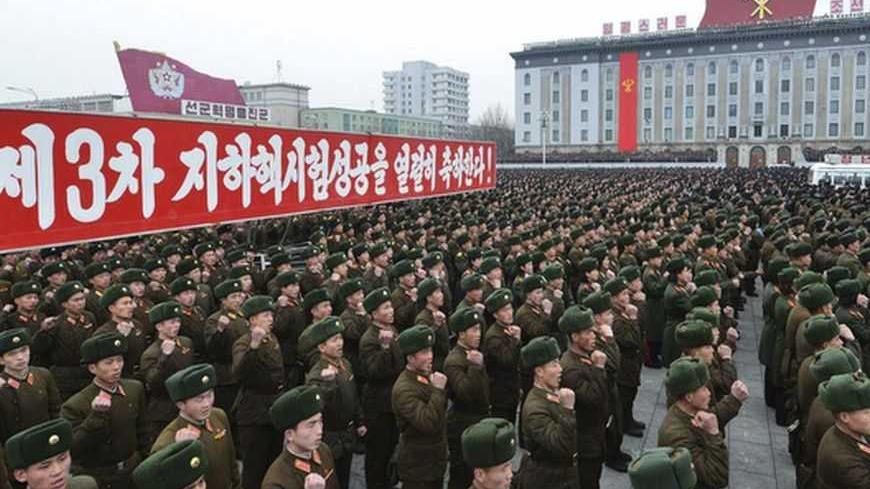 The successful nuclear test conducted by North Korea, which involved the explosion of a uranium-based atomic bomb, has given rise to deep concern in Israel.

The test is seen primarily as a North Korean exercise in sales promotion to Iran and other potential customers in the Middle East who may be interested in purchasing nuclear weapons. It is feared that North Korea, which for years has been providing various countries in the Middle East with missile technology, is liable to become a supplier of nuclear technology and weapons to the region, as well. So far, it is not clear to what extent Iran was involved in the test. In any event, another nuclear test may be expected in the near future.

The repercussions of the recent nuclear test conducted by North Korea have been overshadowed by the spy stories preoccupying the Israeli public recently. However, officials who are closely watching the global diffusion of nuclear technology see the North Korean test as an alarming red flag. Following two less-successful tests involving the explosion of a plutonium-based nuclear device, in which the plutonium was produced from the graphite nuclear reactor in Yongbyon, North Korea has now succeeded in exploding a uranium-based nuclear device, using uranium enriched in a nuclear plant exposed just over a year ago. It is suspected in Israel that Iran is seeking to acquire similar capabilities and build a bomb of the same kind, using its nuclear enrichment facilities in Natanz and Fordow.

And although the nuclear explosion in the recent test was on a rather limited scale (of less than half the magnitude of the bomb dropped on Hiroshima), the relatively small nuclear facility under discussion constitutes a significant step toward a North Korean capability to produce a nuclear warhead designed for mounting on a ballistic missile. As was the case in previous nuclear tests conducted by North Korea, Iranian experts were reportedly present at the test site in P'ihyŏn-ri. Seismographic measurements showed that, unlike in the two previous tests, the nuclear device functioned efficiently and its explosive yield fully met expectations.

While most countries are trying to decipher the political message delivered by North Korea to its neighbors, as well as to the United States, in the Middle Eastern context, the test is seen primarily as a North Korean exercise in sales promotion aimed at potential customers in the region, first and foremost Iran. For over a decade, Iran has been endeavoring to develop a nuclear warhead capable of being mounted on its Shahab and Ashoura missiles. It may thus be speculated that the message the North Koreans sought to deliver to Iran in their recent nuclear test was, "Why work hard to develop a warhead on your own, when every move and test you make with the “neutron trigger" is photographed and monitored by the West, if you can simply buy a warhead off the shelf from North Korea? And the warheads work, as the North Koreans have now aptly demonstrated.

For long years, North Korea has been the chief supplier of missile technology to various countries in the Middle East, mainly Iran and Syria. The North Korean No-Dong missiles were successfully replicated by the Iranian engineers, who developed the Iranian Shahab-3 and the Syrian Scud-D missiles. Syrian President Bashar Assad went as far as to purchase an entire nuclear reactor from the North Koreans. The precise replication of the nuclear reactor in Yongbyon, set up in the Syrian region of Deir ez-Zor, was, according to foreign sources, destroyed in an airstrike by the Israeli Air Force. The close relations between Pyongyang and Cairo led in the past to the deployment of a Korean fighter squadron designed to reinforce the Egyptian air defense.

Israelis fear that the Koreans are now planning to follow in the footsteps of Pakistani nuclear scientist Abdul Qadeer Khan and supply nuclear materials and technology to the highest bidders. The Korean dictatorship has already shown that when it comes to the diffusion of banned technologies, it has no scruples. In view of the growing economic plight of North Korea, the dissemination of nuclear technology may well prove an especially lucrative business for Pyongyang.

Indeed, why should the Iranians enrich uranium in their facilities in Natanz and Fordow when inspectors and cameras monitoring their activity on behalf of the International Atomic Energy Agency (IAEA) are measuring every gram of uranium produced in the process? Why should they go to the trouble of hiding their efforts to devise a nuclear warhead, when they can buy one ready made?

The Iranians, who thus far have insisted on developing a capability all on their own, aside from drawing on North Korean know-how, are now presented with an attractive offer by North Korea — a convenient and risk-free course of action.

However, the Iranians are not the only potential customers wooed by North Korea. Egypt, whose status as the dominant Arab state is on the decline, is not indifferent to the developments in the region. Its nuclear aspirations have been exposed on a number of occasions in the past by IAEA inspectors, who discovered unreported activities and tests in the Egyptian nuclear-research center in Inshas. The Egyptians, who are aware of theis declining standing in the Middle East, where for the last sixty years they enjoyed supremacy, are quite apprehensive of the Iranian nuclear drive to develop the Shiite bomb, and they are no doubt interested in acquiring nuclear capabilities of their own.

It is assessed that Turkey, too, which does not hide its ambitions to lead the Muslim world, will most probably act to develop a Sunni bomb as a counterweight to the Iranian one.

But more than anything, the North Korean nuclear test has sent a resounding message to the whole world: Beware of us, as a country already in possession of nuclear capability can do as it wishes, whatever the rest of the world may say and however it may react.

And the truth is that no one will dare mess with those in whose nuclear arsenal there is already a bomb or two.