Just days before the nuclear agreement between Tehran and the P5+1 entered the implementation phase, Iran test-fired a new precision-guided ballistic missile. 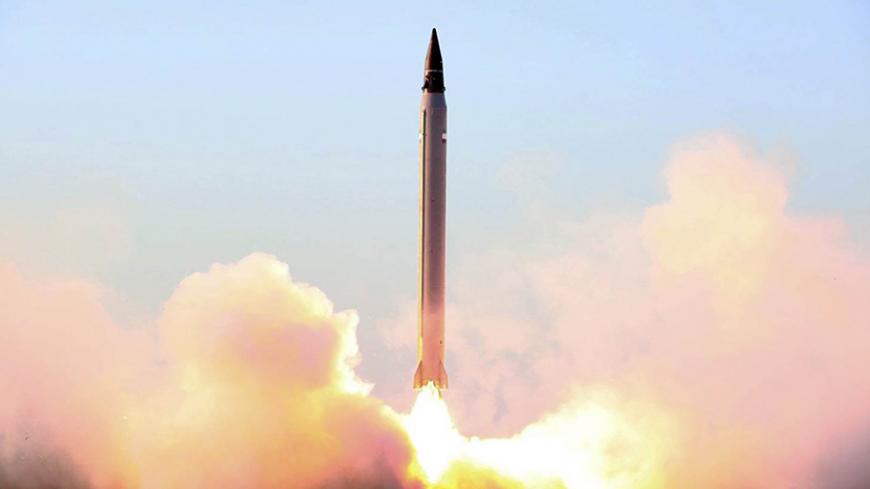 TEHRAN, Iran — Last week, Iran’s Ministry of Defense managed to successfully test-fire its Emad medium-range ballistic missile. According to Defense Minister Brig. Gen. Hossein Dehghan, “This is the first ballistic missile developed by Iran that can be precision-guided until it reaches its target.” A few days later, for the first time, Iran’s state television broadcast a report on one of Iran’s biggest underground storage sites for Shahab ballistic missiles.

Considering the imminent implementation of the Joint Comprehensive Plan of Action struck between Iran and six world powers, the two moves are a sign that Tehran wants to flaunt its military might and determination to expand its military power.

The Emad launch was Iran's first ballistic missile test since the nuclear agreement was concluded. According to the JCPOA, Iran is not allowed to improve and test medium-range ballistic missiles designed to carry nuclear warheads. Iranian officials do not, however, interpret the rule as a restriction on its missile arsenal, arguing that the weapons are not designed to carry an atomic payload. Indeed, they have continuously talked about Iran’s right to expand its military capabilities, including its missile program. Along this vein, 220 parliament members have published a statement emphasizing that the Islamic Republic believes it has the right to expand its missile capabilities, and that the nuclear agreement cannot become an obstacle to such expansion. Indeed, senior nuclear negotiator and Deputy Foreign Minister Abbas Araghchi has stated that it is Iran’s fundamental right to reasonably expand its defense and missile capabilities, and that in doing so, it will not violate any of its obligations under the JCPOA.

Nonetheless, US officials have reacted to the recent missile test as a violation of Iran’s obligations. President Barack Obama stated that the nuclear deal “does not fully resolve all areas of dispute with Tehran. And so we are going to have to continue to put pressure on them through the international community.” Moreover, UN Ambassador Samantha Power said Oct. 16, “The United States is deeply concerned about Iran's recent ballistic missile launch. After reviewing the available information, we can confirm that Iran launched on Oct. 10 a medium-range ballistic missile inherently capable of delivering a nuclear weapon. … This was a clear violation of UN Security Council Resolution 1929.” Meanwhile, the French Foreign Ministry published a statement emphasizing that Iran's ballistic missile test was a violation of a UN Security Council resolution and sends "a worrying message."

While neither US nor European officials have stated that Iran’s missile test violates the JCPOA, it appears that Iran and the world powers continue to have serious disagreements regarding the Iranian missile program. From Tehran’s perspective, only the installation of equipment to accommodate a nuclear warhead means that a missile is designed to carry nuclear warheads. For the United States, the criteria is whether the missile has the potential to carry an atomic payload.

How is the Emad different from other Iranian-made missiles?

Although Iranian military officials have not yet officially announced the range of the Emad, some Iranian news agencies have reported it as 1,700 kilometers (1,000 miles). Its fuel type has not yet been announced either, but it can be determined — based on footage of its firing — that its engine runs on liquid fuel. Liquid-fuel missiles are a fraction of the cost of solid-fuel missiles to produce. It thus appears that because of the economic restrictions of the past few years, and after many years of testing solid-fuel missiles, Iran has decided to once again produce liquid-fuel missiles.

The Emad has a single-stage design and its new warhead distinguishes it from the more prominent Shahab-3 ballistic missile. Most of Iran's medium-range ballistic missiles can carry payloads of between 700 and 1,000 kilograms (1,500-2,200 pounds). Considering the size and possible range of the Emad, this liquid-fuel missile can likely carry a warhead weighing about 750 kilograms (1,700 pounds). When one carefully reviews the images captured of the warhead, one can see that there are winglets designed to increase the missile’s precision. Moreover, if the winglets are in fact aerodynamic, they can be guided as well.

However, since Iran does not have geostationary military satellites, it is not capable of guiding ballistic missiles over a long distance, as it by default uses the American global positioning system. In the event of a war between Iran and the United States — or Iran and Israel — the Pentagon could disable the global navigation system. Therefore, considering that Iran does not have its own satellite system and does not use the Russian GLONASS, it is possible that the Emad will be guided via radio from Iran’s military stations or its unmanned aerial vehicles in Syria and Lebanon.

The earlier successful testing and mass production of solid-fuel, two-stage ballistic missiles such as the Sejjil are considered a huge technological leap for Iran. However, the fact that Iran has decided to once again produce liquid-fuel missiles shows that there are probably enough solid-fuel missiles stored in silos to allow Iran to react quickly in time of war. Tehran can thus benefit from less expensive liquid-fuel missiles in the second phase of any hypothetical war.

In conclusion, as far as aerodynamic and technical characteristics are concerned, the Emad shares many similarities with Iran’s earlier Qader, Shahab and Sejjil missiles. This lack of change shows that Tehran has not progressed beyond the North Korean Nodong and the Soviet Union Scud missiles. Although Iran has showcased many different types of ballistic missiles in the past few years, none of them are technologically noteworthy when it comes to structural design. This observation suggests that Iran has mastered the available technology, but has been somehow stopped from expanding its ability to produce other types of ballistic missiles with different platforms.