Is Netanyahu ready for Biden?

Israeli Prime Minister Benjamin Netanyahu prefers for Donald Trump to stay in the White House, but will also know how to operate vis-a-vis his old acquaintance Joe Biden. 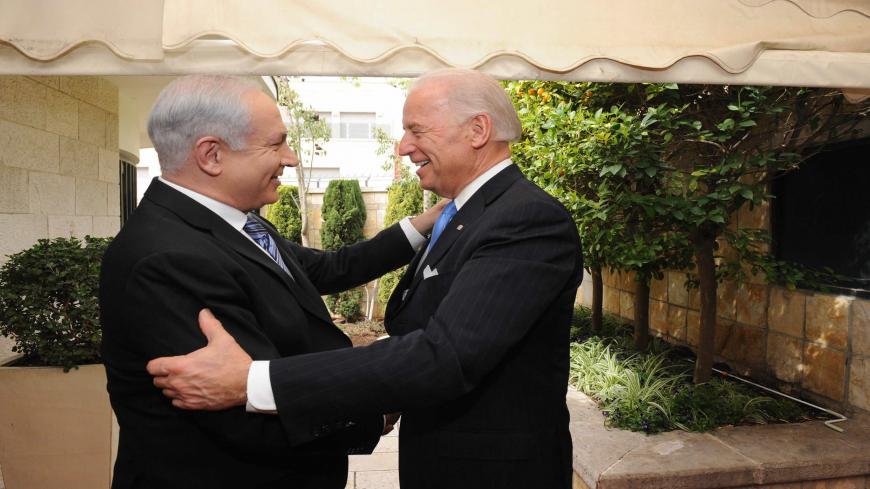 If Israeli Prime Minister Benjamin Netanyahu were eligible to vote in the United States, he would naturally and logically have voted for President Donald Trump and convinced all his acquaintances to do so, as well. On the other hand, one school of thought believes Netanyahu has squeezed all he can out of this US president and would prefer a first Joe Biden presidential term to a second Trump one.

“There is nothing more dangerous than a second-term president,” a senior Israeli diplomatic source told Al-Monitor on condition of anonymity. “Especially when that president is Trump who is unpredictable to begin with.” Netanyahu, according to this theory, has scraped the bottom of the barrel of goodies that Trump has kept filling for the past four years and now prefers a familiar, stable, veteran White House presence to one focused on shaping his legacy and eyeing the Nobel Peace Prize.

The truth is somewhere in between. If Netanyahu could have voted, he would have faced a tough dilemma. I would venture a guess that Netanyahu would have ultimately voted for Trump, but not without agonizing long and hard over his choice. Going along with a second-term president is a gamble. Nonetheless, it is hard to ignore the endless, unbelievable strategic gifts with which Trump showered Netanyahu throughout his term, and the fact that Israel’s ambassador in Washington, Ron Dermer, enjoys almost unfettered White House access and takes part in formulating highly sensitive policy papers prepared by the president’s top aides. Trump is the proverbial gift that keeps on giving, and Netanyahu loves presents. Netanyahu got addicted to the influence he wields on the White House and will have a hard time weaning himself off this heady drug.

When Trump stunned the world — and Hillary and Bill Clinton — by being elected in 2016, Netanyahu broke out into a wild dance, but Israel’s professional diplomats broke out in a sweat trying to understand what made the new president tick, and second-guessing his appointments and policies. “It was a mystery,” a former high-ranking Israeli diplomat told Al-Monitor on condition of anonymity. “We had no idea who he would bring with him and he ignored most Washington professionals and the Republican establishment because these people had signed petitions against him.” Even after Israeli officials began to familiarize themselves with the top White House and National Security Council appointments, the acquaintance was often short-lived. The president’s inner circle often resembled a bucking bronco, throwing off everyone who climbed on — very few managed to hold on. Officials in Jerusalem watched with a mix of despair and disbelief.

Biden is the exact opposite. “We are going back to the Clinton-Obama establishment,” a senior political source in Jerusalem told Al-Monitor on condition of anonymity. “People we know, who came up through the system, who worked for years in the Senate, White House, State Department, National Security Council. People with whom we know how to work. Predictable, familiar. It’s a completely different feeling. No longer lawyers and Wall Street money people. Now we will experience the return of an American political establishment that does not always go along with our foibles, but which the Israeli system gets along with very well.”

If Biden is elected — as of this writing, he appeared close but was not quite there — Netanyahu can still thank the good luck that saved him from a “blue wave” and left the Senate in Republican hands. “As long as the Senate is Republican, Netanyahu is all set,” a source in the prime minister’s circle told Al-Monitor on condition of anonymity. “He maneuvered an impatient, young [President Barack] Obama for eight years, he will not have a hard time maneuvering Biden, especially as Biden and Netanyahu have enjoyed a truly friendly relationship for decades. They will get along. It will not be a passionate affair as things were with Trump, but it will be totally bearable. And anyway, Biden is unlikely to have much time and patience for the Middle East with the coronavirus pandemic, tensions with China and [Russian President Vladimir] Putin’s bullying.”

The elephant in the room is the Iranian issue. Trump delivered on Netanyahu’s rosiest dreams in this regard. He pulled the United States out of the nuclear deal with Iran and followed it with a policy of “maximum pressure” on Tehran. “Trump and Biden, both, seem to be planning to enter into negotiations with Iran if elected — the question is the goal and the style,” a former senior Israeli defense source told Al-Monitor on condition of anonymity.

In other words, Israel believes Trump will enter negotiations “Trump style.” He will not lift sanctions on Iran or does so only symbolically. “He believes in conducting negotiations from a position of power and applying pressure on the rival,” the security source said in analyzing Trump’s style. “Whereas Biden would consider goodwill gestures and perhaps an easing of sanctions as a means to generate a positive climate for renewed negotiations.”

What counts is the bottom line. “Trump could lose interest, as was the case with his negotiations with North Korea,” the senior Israeli diplomatic source noted. “He could even strive to win the Nobel Peace Prize at any cost and end up with an Iran agreement very similar to the original one. With Biden, it is hard to tell,” the source conceded. “What we know for sure is that Biden will not accept a nuclear Iran either. We hope Biden will bring an improved nuclear agreement — long term — which will plug some of the holes in the first one.”

Would Trump or Biden use force against Iran if negotiations fail? This is yet another question that the best minds in Israel’s defense and intelligence agencies are trying to answer, without much success. The Foreign Ministry and the Israel Defense Forces (IDF) are engaged in a long-running argument about Trump. Foreign Ministry experts say Trump only uses forces if it can be done in one shot, on a limited, local basis. He did give the order to take down Islamic Revolutionary Guard Corps commander Qasem Soleimani, but almost in the same breath ordered a drawdown of thousands of US troops from Syria and the Middle East. Whenever a longer-term use of force with entanglement potential is discussed, he is not on board. The IDF did not see it quite that way. Trump’s unpredictable nature, according to the security and intelligence analysts, does not rule out a possible decision on a military adventure against Iran.

As for Biden, the Democrat, the situation is no less complex. “Biden is not Obama,” the senior Israeli diplomatic source said. “Netanyahu’s nightmare is of a Biden in Obama’s clothing. But that is nowhere near the truth. Biden graduated from the school of hard knocks, he is somewhere in the middle between Obama’s peacenik liberalism and the Bush family’s aggressiveness. If pushed to the edge, he could well use force.”

In Biden does, indeed, move into the Oval Office, no one in Jerusalem will have much homework to prepare. “We know all the president’s people like the back of our hand,” said a top diplomatic official on condition of anonymity. “Names such as Tony Blinken [Biden’s top foreign policy aide], Michele Flournoy [slated for the Pentagon], Jake Sullivan, Dennis Ross, Martin Indyk [all former diplomats and/or foreign policy advisers], and second-tier people like Nick and Bill Burns, Ilan Goldberg, all these people know us, know the Middle East and the issues on the agenda for at least two decades. Everything will run like clockwork from the get go, they are expected to hit the ground running.” The two administrations will differ strategically in at least one sense. “Sadly, we will have to take our leave of [Ambassador] David Friedman, who was more of a settler than the settlers, and return to a policy that views the Green Line as the basis for all negotiations and the settlements as a bone in the Palestinians’ throat. The gay days when the settlers danced in Washington will be no more."