The most important thing now for Israel’s security agencies is for the Biden administration to dialogue with them and include them over its future Iran policy. 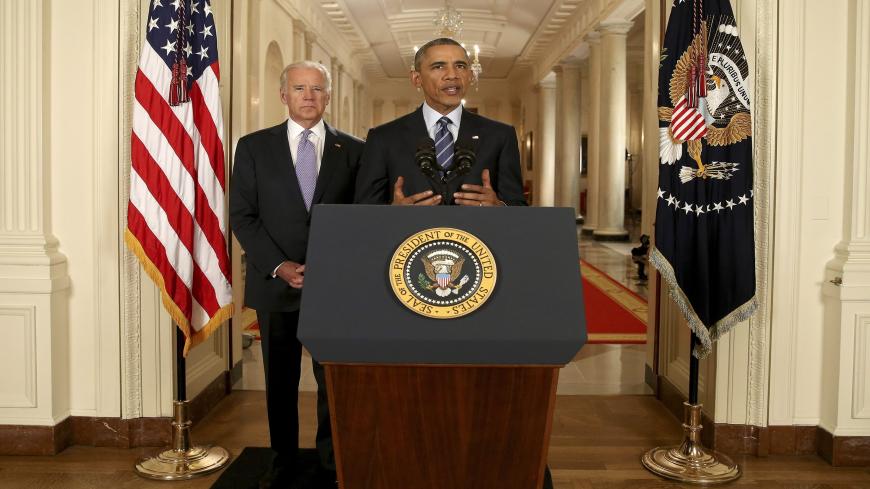 Israel’s security agencies and its Muslim Sunni allies in the Middle East can ostensibly be pleased with the situation in Iran after four years of the Trump administration. US sanctions have exacerbated Iran’s economic downturn to the point of near bankruptcy, and its international standing is not what it was, either. Its progress in the military-security arena has also taken some touch knocks.

Iran has three overarching goals in this regard: Its nuclear program, its precision missile program and its continued expansion throughout the Middle East. Two of the three have been dealt deadly blows over the past year, verging on total knockout. The driving force of its regional entrenchment, the legendary commander of the Iranian Revolutionary Guard Corps’ Al-Quds Force, Qasem Soleimani, was assassinated by the Americans in January 2020, and the mastermind behind Iran’s nuclear program, Mohsen Fakhrizadeh, was taken out (by the Israelis just last month, according to foreign media reports). Iran’s only progress has apparently been on development of its arsenal of cruise and ballistic missiles.

Both Soleimani and Fakhrizadeh were irreplaceable strategic assets. Since Soleimani’s assassination, Western intelligence has detected an Iranian pullback from various arenas and difficulty in maintaining its hold on parts of Iraq and Syria. The level of its determination in this regard has also plunged. Soleimani was also the one who constantly agitated vis-a-vis Iran’s decision-makers, and especially Supreme Leader Ayatollah Ali Khamenei for continued investment in Iran’s regional expansion and entrenchment. His successors, according to various assessments, are not in his league.

Almost the same is true of Iran’s nuclear program. “The Iranians will find it hard to impossible to replace Fakhrizadeh,” a senior Israeli security official told Al-Monitor on condition of anonymity. “It’s not that their nuclear program will be shut down because of his death, but it will be unable to proceed at the speed they want. He was a repository of rare knowledge and there is no one in Iran of his caliber to replace him.”

The timing of the Iranian scientist’s killing, 53 days before US President-elect Joe Biden assumes office, presents the Iranians with a complex dilemma. The regime’s strategic goal is simple — to survive President Donald Trump — and success is almost at hand. They are desperately awaiting their long-held dream of Biden’s entry into the White House. Trump is not the only one leaving office. In the remaining months of his term, President Hassan Rouhani is seeking to shape a simple legacy — surviving Trump and returning to the nuclear agreement with the United States and other world powers. These achievements are within reach. “They need to control themselves just a while longer,” a former senior Israeli military source told Al-Monitor on condition of anonymity this week.

Israel, on the other hand, is looking ahead at Biden’s administration with concern, shared by almost all its security agencies from the top echelons of the Israel Defense Forces to Military Intelligence and the Mossad.

The anxiety is two-fold. First is Biden’s possible return to the Iran policy adopted by his former boss, President Barack Obama, and especially a fast-paced return to the nuclear agreement he forged in 2015. Second — and just as troubling — is the fact that up to now Biden’s people have not established an intimate, intensive dialogue channel with the Israelis that would allow them to weigh in on this existential threat as the new administration shapes its policy.

“Much has changed in the five years since the nuclear agreement was signed,” an Israeli intelligence source told Al-Monitor on condition of anonymity. “We want to update the Americans and illustrate the rare opportunity that the United States now has to take advantage of Iran’s situation.” The issue is highly sensitive and is only discussed behind closed doors. No one wants to be caught out in a direct quote related to this volatile issue ahead of negotiations between the United States and Iran.

Israel believes Iran will accept a US proposal, if one is made, that would include a lifting of some sanctions and a full return by Iran and the United States to the nuclear agreement. Iran would have no problem scaling back its enriched uranium production to the levels permitted under the agreement, reducing its stockpiles and keeping its part of the bargain. Iran has made it through the first five years of the agreement, which were the toughest.

That is why Western intelligence officials believe Iran will probably not retaliate for Fakhrizadeh’s killing. According to these assessments, the Iranians are convinced the attack attributed to Israel was designed, inter alia, to lure Iran into a response that would set the region on fire and possibly prompt a reaction by Trump, too. “They were worried about a strategic ambush,” a top-ranking security source told Al-Monitor on condition of anonymity. “And they suspect that Fakhrizadeh’s assassination was supposed to be such an ambush. That is why they are weighing their moves with great caution and are unwilling to be tempted. If Iran responds, it will do so as near as possible to Jan. 20, when Trump is already a lame, blind and deaf duck.”

Israel’s security agencies would give a lot for an opportunity to change the next administration’s views on Iran. The two sides are exchanging messages indirectly, mostly through various think tanks and media monitoring. The main US mistake, Israel says, is the urgency it feels to revert to the way things were before Trump pulled the United States out of the deal — because of the enriched uranium Iran has stockpiled since then and the new centrifuges it has developed.

Israel believes the new administration is also keen to wipe out as quickly and effectively as possible all signs of Trump’s legacy. Such a move in terms of the US policy on Iran would be disastrous, according to high-level Israeli defense officials. “Things have changed since 2015, Iran is far more vulnerable these days and susceptible to powerful levers, and there is no reason to volunteer to go easy on them and return to the agreement without ensuring that real amendments can be introduced into the deal,” the top-ranking security Israeli source said this week.

Israel is troubled by two upcoming windows of opportunity: The one opened by the transition between the Trump and Biden administration, which closes on Jan. 20, and the one between January and July 2021, when presidential elections are scheduled in Iran. The two-term Rouhani will not run for reelection. Israeli officials believe that means he will do everything in his power to ensure his legacy of surviving Trump and returning to the nuclear agreement.

Israel believes that this motivation, combined with the worldview of senior Biden aides, is a catastrophe in the making. Right now, Israeli security officials say that an intimate Israeli dialogue with the incoming administration is the most essential and urgent next step, including an exchange of intelligence assessments that would allow Israel to wield influence on US policy, a privilege it was denied during the Obama administration due to the tense relationship with Prime Minister Benjamin Netanyahu. To the best of our knowledge, such a channel has not been opened with the president-elect’s office and Jerusalem, prompting grave concern in Jerusalem.

This concern is compounded by the fact that many in Israel believe a discrete, indirect exchange of messages is already underway — between Washington and Tehran. “Presumably, Biden’s senior appointees are already testing the waters through various indirect means,” another Israeli security official told Al-Monitor on condition of anonymity, “which makes it even more important for us to enter the picture and paint it in its true colors for the Americans.”