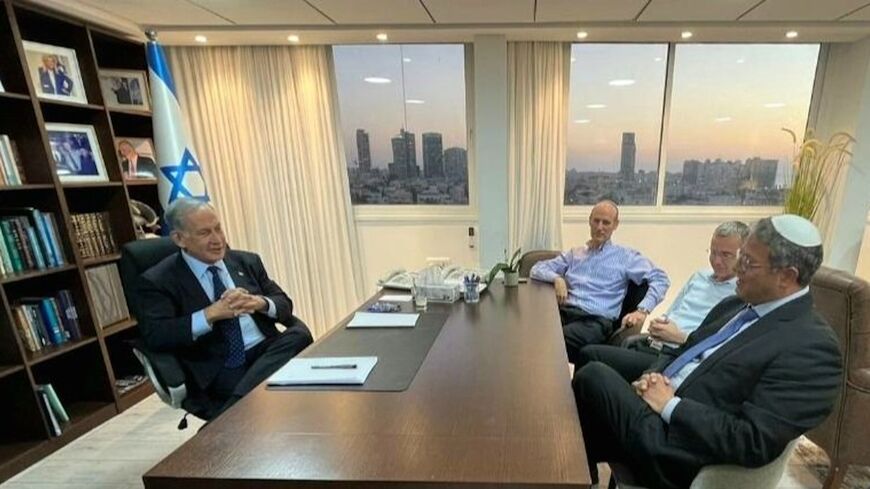 US President Joe Biden congratulated Israeli Prime Minister-designate Benjamin Netanyahu Nov. 7, some four days after the final election results confirmed the comeback of the former leader, and a week after the elections. Biden could have called sooner, as some foreign leaders did, but he might have remembered how long it took Netanyahu to call him after his own November 2020 defeat of Donald Trump, and decided to wait. They can now be considered even on that score.

The eight-minute call was a typically polite conversation between two well-acquainted veteran statesmen. That was also the tone of the White House statement, which hailed the US-Israel relationship as a “bedrock of shared democratic values.” Netanyahu told Biden he intends to achieve additional historical Israeli agreements with Arab states (a clear hint to Saudi Arabia), a reference to the normalization process he launched with Trump, known as the Abraham Accords.

Despite the cordial tone, Biden must have realized that his interlocutor is rooting with all his might for a Republican victory in the Nov. 8 mid-term elections, at least as fervently as Trump is. The results will determine, to a large extent, Netanyahu’s prospects of maneuvering Biden, as he did adroitly with his Democratic predecessor, Barack Obama. A Republican sweep of both houses of Congress would make it harder for Biden to browbeat Netanyahu’s emerging ultrareligious and ultranationalist government, the most radical Israel has known.

Netanyahu is closer in his conservative views and personal ties to the Republican Party than to the Democrats, enjoying important bastions of power in the Republican Party. “Netanyahu has a window of opportunity of about one year between the mid-terms and the start of the 2024 presidential campaign,” a Netanyahu associate told Al-Monitor on condition of anonymity. “All Netanyahu needs is to hang on for that year, without significant damage to relations with the US administration. If the Democrats manage to retain their majority, Netanyahu’s task will be tougher, obviously.”

Netanyahu’s return to the premiership after some 18 months on the opposition benches is dismal news for the Biden administration. While the two men have known each other for decades and used to be firm friends, too much bad blood has distanced them in recent years.

Biden remembers well his traumatic 2010 visit to Israel as Obama’s vice president, during which the government announced its approval of hundreds of housing units in east Jerusalem, in a clear slap in the face to US policy. Biden has also not forgotten Netanyahu’s declared support for Republican candidates, most clearly manifested in his backing of Mitt Romney over Obama in the 2012 presidential elections.

Netanyahu, however, is the least of Biden’s problems. The White House and Democrats’ nightmare stems from the unprecedented voter support for the Religious Zionism party, which handed Netanyahu his victory and will feature prominently in his 6th government. Party leader Bezalel Smotrich is in line for a senior ministerial job (maybe the Finance Ministry), and his running mate, ultranationalist Jewish Power party Chair Itamar Ben-Gvir for the position of public security minister, a tinderbox in the tense Jewish-Arab relationship.

Ben-Gvir, his protestations notwithstanding, is the ideological successor of the late ultranationalist Rabbi Meir Kahane, who established the Jewish Defense League in the United States and whose Kach party was outlawed in Israel and designated a terrorist organization.

Ben-Gvir and Smotrich are leading a pronounced, radical right agenda, which espouses the use of massive force against the Palestinians and verges on outright racism. They also advocate a religious agenda and are expected to adopt measures detrimental to minority rights, as well to the independence of the judiciary and the state prosecution. Other legislation on their wish list is equally disturbing. It is unclear how the US administration will deal with these scenarios, if at all.

These developments shed an interesting light on the post-election phone call initiated by US Ambassador to Israel Thomas Nides to the leader of the ultra-Orthodox Shas party, Knesset member Aryeh Deri. While Biden was taking his time calling Netanyahu, Nides was quick to contact Deri, establishing a channel of communications that is expected to be instrumental in preserving the Israel-US strategic alliance in the coming years.

Although he leads a right-wing, ultra-Orthodox party, Deri is considered a pragmatic leader loath to embark on military adventures and far more restrained in his views than his future coalition partners. Nides appears to have done his homework with veteran figures in Israel’s security agencies, all of whom vouched for Deri’s pragmatic approach as a long-standing member of successive security Cabinets.

“The Americans will view Deri as a sort of responsible adult,” a senior Jerusalem official told Al-Monitor on condition of anonymity. “They know him, they do not admire him and some of the conservative values he espouses are anathema to Western democratic values. But given the current state of affairs, he is the only remaining lever the administration has in the incoming Israeli administration.”

Netanyahu will find himself with little or no room for maneuver. Unlike his previous governments, which he dominated without contest, this time he will be held hostage by assertive, radical partners. He is in search of a suitable figure for the highly sensitive position of Israel’s envoy to Washington to replace Ambassador Mike Herzog, held in high regard by the White House. He also needs to appoint a national security adviser. These are the two key posts that will have to deal with differences with Washington whenever Netanyahu’s coalition stirs trouble.

Another crucial appointment is that of defense minister, in charge of the close strategic relationship between the Israeli and American defense-security establishment, including intelligence agencies. Smotrich has already made clear he wants the job. Netanyahu knows full well how that would go down in Washington. Netanyahu may decide to hold on to the defense portfolio for an interim period, or to appoint Likud party Knesset member Yoav Galant, in order to appease the US administration. Either way, the incoming Netanyahu government — Israel’s most radical ever — will pose the most significant challenge to the important and sensitive Jerusalem-Washington axis.