By handing over responsibilities for administrating lives in the West Bank to his far-right partners, Prime Minister-designate Benjamin Netanyahu is playing with fire on the international arena. 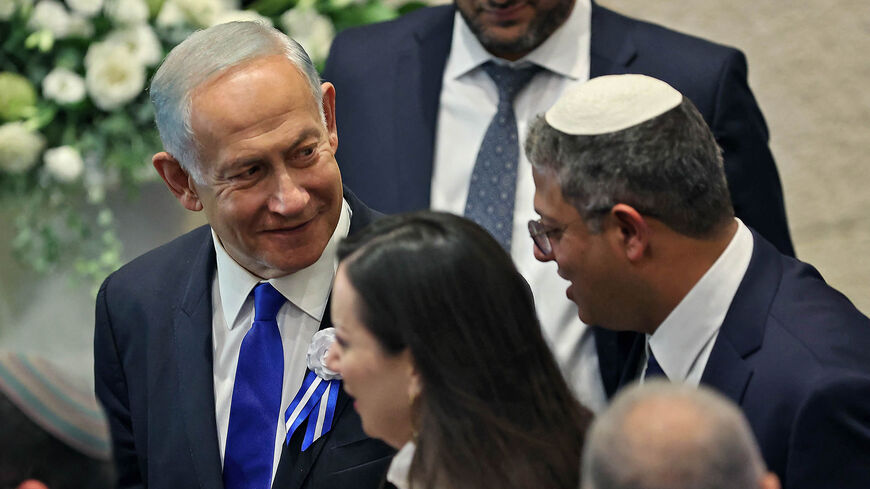 Former Prime Minister Naftali Bennett visited Washington this week, dropping in at the White House, meeting with national security adviser Jake Sullivan and top administration officials, and providing his assessments of political developments in Israel. Mostly, he listened, hearing grave concern that he was unable to allay.

Bennett’s visit took place on a difficult bilateral backdrop. The government that will soon assume power in Israel is shaping up as the most right-wing, radical, conservative and pyromaniacal ever. Friction with the Biden administration, bolstered by this week’s Democratic Georgia Senate win, will undoubtedly focus on Israeli policy in the West Bank, specifically the planned transfer of authority over its Palestinian population to designated hard-line Ministers Itamar Ben-Gvir and Bezalel Smotrich. Other irritants, not necessarily in that order, are the threat posed by these hard-liners to the Temple Mount status quo and human rights violations.

From Israel’s point of view, it has largely avoided serious sanctions or legal repercussions over its occupation of the West Bank since 1967. Its endeavors have been aided by the protective umbrella provided by successive US administrations and the unique form of hybrid control it introduced over the territory populated by over 2 million disenfranchised Palestinians living alongside hundreds of thousands of Israeli Jews enjoying full rights.

Israel has stopped short of annexing this territory de jure, insisting for 55 years that this situation was temporary. De facto, the international community has reluctantly accepted this “temporary” arrangement, tacitly approving the governance of Palestinians by Israeli military law under the sovereignty of a military command, and the jurisdiction of civil Israeli law over residents of the Jewish settlements in the disputed territory.

The imminent installation of an ultranationalist, ultra-religious Israeli government is the emerging turning point for this hybrid form of governance.

“The new government could end up being the best gift for the BDS [boycott, divestment and sanctions movement] activists around the world,” a senior diplomatic source in Jerusalem told Al-Monitor on condition of anonymity. “The new government will lose the levers that helped, to some extent, maintain Israel’s continued international legal credit and avoid sanctions or boycotts. This could result in an escalation on the ground and ensuing chaos, with severe repercussions for Israelis’ way and quality of life.”

Israel achieved its relative international immunity by virtue of its robust immune system — the highly respected Supreme Court and an effective judicial system. The top court has been standing for years against discrimination between the civilians under Israel’s jurisdiction, issuing rulings protecting Palestinian appellants and enshrining their rights. Liberals argue that it had not done enough on that score and sided too often with the government and military. That aside, the court enjoys a reputation for evenhandedness.

The administration of Palestinian lives by military officials independent of politicians has paradoxically also lent a degree of credibility to Israel’s international reputation.

This “temporary,” ambiguous situation might have continued were it not for the results of the Nov. 1 elections, with the sweeping changes in the political map and new policies likely to test international patience. Israel may be forced to account for its actions of the past half century and presented with a hefty bill, albeit much deferred.

Famed US Attorney Prof. Alan Dershowitz, a longtime supporter of Prime Minister-designate Benjamin Netanyahu, gave extensive media interviews this week, urging him to avoid undermining the authority of the top court by going through with his plans to legislate an override clause allowing the Knesset to set aside Supreme Court rulings. His message was clear — if it ain’t broke, don’t fix it.

The turning point in the status of Israel’s continued domination of the West Bank lies in Netanyahu’s acceptance of Smotrich’s demands to receive the powers now held by military generals over the lives of Palestinian residents by appointing him to a newly created post of “special minister in the Defense Ministry.”

A senior diplomatic source in Jerusalem told Al-Monitor on condition of anonymity that this move is likely to undermine the long-held assumption of the international community that the civil administration in the West Bank, while implemented by the military, was nonetheless run as a professional body according to the needs on the ground rather than politicians’ ideologies.

The source noted that Smotrich holds radical views, disavowing Palestinian rights, promoting the supremacy of Jewish religious law and believing that chaos will result in Armageddon and hasten the coming of the Messiah. “This could upend the existing order and expose Israel and its senior officers and officials to a wave of international lawsuits,” he added.

In a further shift of the status quo, Smotrich’s running mate — Jewish Power party Chair Itamar Ben-Gvir — is being handed direct authority over the Border Police units deployed in the West Bank. This, too, transfers operational policing power to a politician considered so radical that Netanyahu avoided being seen in public with him until several months ago.

“These changes will not go smoothly with the international community,” a former senior military officer told Al-Monitor on condition of anonymity. “As such, no one will accept Israel’s contention that it is administering the West Bank in accordance with proper international legal standards. Those who think Israel will continue to evade sanctions or lawsuits are deluding themselves.”

Netanyahu is undoubtedly playing with fire, not from a position of power but from one of weakness. He is completely dependent on his coalition partners who represent the most regressive forces in Israeli society. He is letting the settlers administer disputed territory, dismantling the Supreme Court’s oversight authority, cannibalizing other government ministries, such as the Education Ministry, as per the demands of the ultra-Orthodox, ultranationalist parties.

While insisting in English-language interviews designed for the ears of the international community that he has everything under control and will not allow the radicals to determine and execute policy, Netanyahu surely realizes this is an unsustainable prospect. At some point, he will lose the support of either his coalition allies or Israel’s American and European allies. The historic Abraham Accords with Arab countries that he himself engineered could also be at risk. Netanyahu is walking into the prime minister’s office on very shaky ground.