To close the deal on a new government, opposition leader Benjamin Netanyahu will need to accept demands from the far-right, which the Biden administration is likely to oppose. 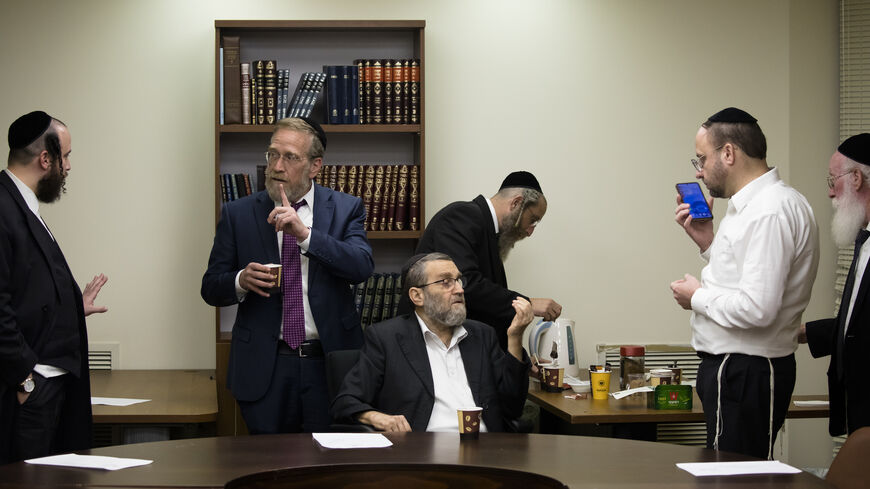 Israeli lawmakers of the United Torah Judaism talk before a party meeting in the Knesset on Nov. 28, 2022 in Jerusalem, Israel. - Amir Levy/Getty Images

Tel Aviv - When Likud leader Benjamin Netanyahu won the Nov. 1 elections, his next challenge was to establish his new government. One of the main hurdles is the long list of demands by Religious Zionism party Chair Bezalel Smotrich.

Recent reports say the current standoff could be resolved this evening. At stake is Israel's relationship with the US administration and the international community at large.

Smotrich’s conditions for joining the emerging Netanyahu government would hand him control over future diplomatic/security developments in the West Bank, a situation that would torpedo Netanyahu’s relations with the White House, Pentagon and State Department. But given the circumstances that have made Netanyahu dependent on the 14 Knesset seats held by the religious Zionist bloc, he holds little sway over Israel's most radical politician ever to assume a position of power.

After convincing Smotrich to drop his demand for defense minister, a nightmarish idea that would have inevitably resulted in chaos, Netanyahu is now struggling with a new demand: to shift responsibility for the Civil Administration that governs the Palestinians in the West Bank from the Defense Ministry to the Finance Ministry under Smotrich.

“That is tantamount to a license to kill,” a Western diplomat told Al-Monitor on condition of anonymity. “The Civil Administration has sole authority to determine what buildings are razed, what buildings are legalized. It directly controls Palestinian and Israeli construction in Area C [the area under full Israeli control] and the settlements. It manages the fabric of daily life in this complex and conflicted region. Handing it over to Smotrich is worse than letting the cat eat the canary. It is giving a blowtorch and gasoline to a pyromaniac.”

Smotrich was detained in 2005 for three weeks by the Shin Bet domestic security agency on suspicion of plotting a terror attack to avert Israel’s withdrawal from the Gaza Strip. Former deputy head of the Shin Bet Yitzhak Ilan dubbed him “a Jewish terrorist.”

But Smotrich is not just an ideological extremist, he is a stubborn politician. He was the one who prevented Netanyahu from forming a government in 2021 with Knesset member Mansour Abbas, chair of the Islamist Raam party, after four indecisive election rounds. His rejection of partnership with an Arab party handed power to Naftali Bennett and Yair Lapid, who governed Israel for some 18 months while Netanyahu fumed on the opposition benches.

To ensure his return, Netanyahu veered sharply to the right and tainted his former potential partner Abbas as a “terrorism supporter.” He is now fated to join forces with Smotrich and forge a deal with the devil.

The crux of the matter is Smotrich’s demand to grant legal status to the dozens of outposts erected in recent decades throughout Area C that have turned into thriving communities housing thousands of settlers. The legalization of these settlements is a pivotal issue of deep concern to the United States, the European Union and the entire Middle East, deepening Israeli control over disputed land and amounting to a declaration of war on the Palestinian Authority.

Control of the Civil Administration, currently subordinated to the military’s Central Command, would enable Smotrich to carry through this legalization plan as well as many other plans affecting the West Bank. Israel has stopped short of annexing the area since capturing it 55 years ago, instead imposing military law there and making the army the sovereign authority under the jurisdiction of the military commander.

“What Smotrich is asking,” a former top Israeli security official told Al-Monitor on condition of anonymity, “is in fact to replace the military commander as the sovereign entity in the West Bank. Netanyahu knew that this idea verges on insanity, but now he has no choice.”

As these lines are written, the coalition negotiations between Netanyahu’s Likud and Religious Zionism are at a critical juncture. Netanyahu has no choice but to give in to Smotrich if he wants to form a government that will give him a fighting chance to stop his ongoing corruption trial.

How Netanyahu intends to deal with this political entanglement and with the international community, especially the Biden administration, is anybody’s guess. This week, outgoing Defense Minister Benny Gantz referred to another Netanyahu plan, hatched in response to demands by Smotrich’s running mate, Jewish Power leader Itamar Ben-Gvir. The plan would transfer jurisdiction over the border police forces deployed in the West Bank from the army to Ben-Gvir in his newly created post of minister of national security.

“We can’t allow the transformation of units into private armies of one minister or another. It is forbidden to privatize the command and control of the IDF,” Gantz said at his National Unity party’s Nov. 28 meeting. He went on to urge Netanyahu and the next defense minister “to stand firm against any attempt to play with the use of force, against any idea that may lead to damaging the function of the security [forces,].” He added, “I trust the heads of the security forces not to bow to illegal demands.”

The prospects of these plans being realized are unclear. Their implementation would mean the privatization of Israel’s national security and de facto annexation of Judea and Samaria, events that are bound to set off a storm on the international stage, in Washington and at home. Netanyahu will need a magician’s sleight of hand to navigate this minefield.