US concerned over appointment of Israeli ultranationalist as public security minister

With President Isaac Herzog preparing to task Benjamin Netanyahu with the composition of the next government, the Biden administration is increasingly worried over ultranationalist Itamar Ben-Gvir, ideological successor of Rabbi Meir Kahane, becoming a Cabinet minister. 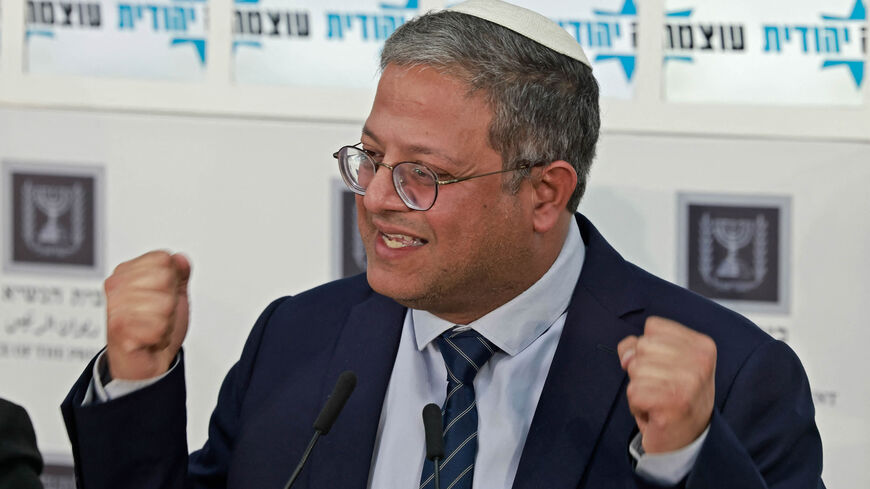 TEL AVIV — The US Ambassador’s Residence on the Mediterranean coast north of Tel Aviv has rarely housed a more concerned envoy than incumbent Tom Nides since the results were announced of Israel’s Nov. 1 elections.

Like Israeli President Isaac Herzog, Nides, too, sent out feelers in recent days to gauge whether outgoing Prime Minister Yair Lapid and Defense Minister Benny Gantz, separately or together, might express “willingness” to save Israel from the emerging ultranationalist, ultrareligious government being formed by Prime Minister-designate Benjamin Netanyahu. Like Herzog, he, too, has realized that this is not a viable option, at this stage.

Just when he thought things could not get worse, Nides, like many top officials and leaders in the region, Europe and the United States, heard that Netanyahu was preparing to appoint Knesset member Itamar Ben-Gvir, chair of the ultranationalist Jewish Power party, as minister of public security, a post that includes responsibility for the Israeli Police and public order. What's more, Ben-Gvir’s running mate — Religious Zionism party head Bezalel Smotrich — is said to be in line for the defense minister’s job.

Both Ben-Gvir and Smotrich would probably not be eligible to visit the United States, as frequently required by the holders of these ministerial positions. Ben-Gvir has a criminal record, having been convicted of supporting (Jewish) terrorism, and Smotrich was detained in the past for six weeks by the Shin Bet security agency on suspicion of plotting a terrorist attack.

Ben-Gvir, 46, is the ideological successor to the late ultraradical American-Israeli Rabbi Meir Kahane, whose racist Kach party was outlawed in Israel and designated a terrorist organization.

On Nov. 10, after meeting with Herzog to recommend that he task Netanyahu with formation of Israel’s next government, Ben-Gvir attended the annual memorial service for Kahane, assassinated in New York 32 years ago. Despite the more moderate image he has tried to convey in recent months, his address at the ceremony was anything but reassuring. He praised Kahane, saying, "I think that the main characteristic of Kahane was love. Love of Israel without compromise and without any other considerations.”

Nonetheless, Ben-Gvir insisted that he no longer espouses some of Kahane’s ideologies, such as his advocacy of expelling Israel’s Arab minority (saying he would only expel Arab terrorists) and other racist legislation (separate Arab-Jewish beaches, for example) that Kahane sought to advance. Upon hearing these caveats, the crowd booed.

The US State Department issued a stinging rebuke of the event and of Ben-Gvir’s participation, saying, “Celebrating the legacy of a terrorist organization is abhorrent."

The incredible change Israel has undergone, as reflected in the elections and their aftermath, is embodied in two Israeli presidents — father and son.

Incumbent Isaac Herzog hosted Ben-Gvir this week in what was described as a positive meeting. His father Chaim Herzog — Israel’s president in the 1980s — boycotted Kahane and refused to meet with him during his one Knesset term. Leaders of the Likud party at the time — Menachem Begin and Yitzhak Shamir — also boycotted Kahane and walked out whenever he addressed the Knesset plenary.

More than three decades on, Kahane’s successor is about to be appointed a member of the government and of its security Cabinet, and tasked with maintaining public order at one of the world’s most volatile hotspots — the Jerusalem site revered by Jews as the Temple Mount and by Muslims who pray there at Al-Aqsa Mosque.

Ben-Gvir was also an admirer of Baruch Goldstein, a doctor who massacred 29 Muslim worshippers at Hebron’s Tomb of the Patriarchs (1994) and whose photo hung in Ben-Gvir’s home in the nearby Jewish settlement town of Kiryat Arba. He removed the photo some two years ago, claiming he no longer subscribed to the racist views he once held. Proof of his claim will be reflected in the decisions he now makes.

Ben-Gvir’s emerging jurisdiction — if indeed appointed public security minister — should be cause for concern by security agencies. He has already demanded greater leeway for security forces confronted with violence, arguing that they should be allowed to use live fire against those who attack them with stones or firebombs. This runs counter to existing policy of measured response to violence, starting with tear gas, moving on to rubber bullets and other anti-riot measures before escalating to live fire as a last resort.

Ben-Gvir has also demanded responsibility for the agency tasked with resettling Bedouin communities in the Negev Desert, another complex and highly flammable issue. His wish list also includes a crackdown on the prison conditions of Arabs serving time for security-related offenses, yet another potential minefield.

Those seeking a bright spot in the latest developments can console themselves with the fact that Ben-Gvir has avoided praying at his favored tinderbox — the Temple Mount — to give thanks for the resounding victory that handed him and Smotrich 14 Knesset seats.

Netanyahu boasted of having prevented Ben-Gvir from praying at the Temple Mount at the height of the May 2020 clashes with the Gaza Strip, telling his listeners that he had foiled Ben-Gvir’s plan to set the region on fire. Netanyahu is now about to hand him responsibility for keeping public order at the site. While Netanyahu has made clear to Ben-Gvir that the status quo on the Temple Mount will be maintained, conveying similar reassuring messages to Arab governments, including Jordan, it remains to be seen whether he can rein in Ben-Gvir and his provocatory conduct.

In a meeting earlier this week with representatives of the ultra-Orthodox Shas party, Herzog expressed his own disquiet and that of Israel’s allies in the region and elsewhere at the prospect of Ben-Gvir’s appointment. Not realizing the sound system was still on, Herzog's comments were heard loud and clear, resonating from Morocco through Cairo and Amman and all the way to the Gulf. “You have a partner that the entire world around us, the entire world is anxious about,” said Herzog.

“The concern is natural, when you hand the keys to the most explosive place in the Middle East to the region’s chief, proven provocator,” a senior Western diplomat in the region told Al-Monitor on condition of anonymity. “We expect clarifications.”

The east Jerusalem neighborhood of Sheikh Jarrah has been a focal point of Jewish-Arab tensions in recent years, since Jews moved into the heart of the predominantly Palestinian community claiming historic ownership of various buildings. Ben-Gvir is the chief troublemaker in this festering dispute, opening a pop-up tent office in the neighborhood under police protection, pouring fuel on the fire and exacerbating friction. The office he will likely occupy as minister of public security is located nearby in the heavily fortified headquarters of the Public Security Ministry and Jerusalem police. Those who did not want his improvised office in the heart of the volatile neighborhood will now have him across the street as the minister in charge.