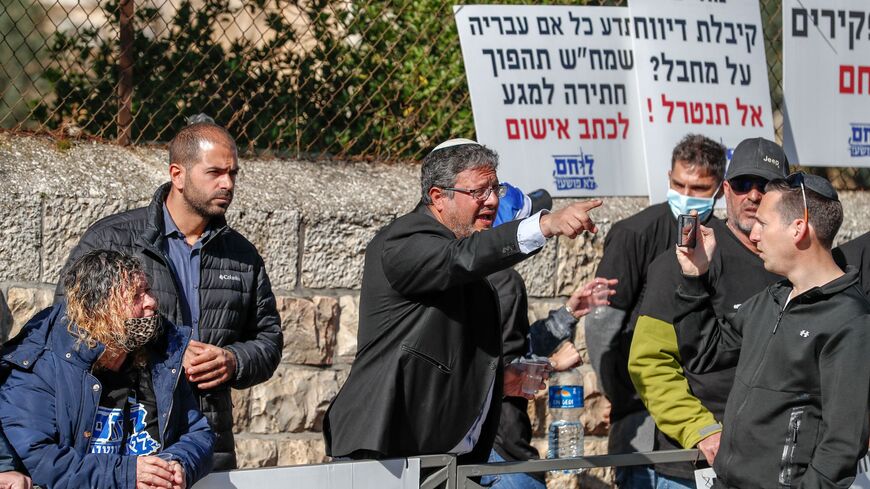 Itamar Ben-Gvir (C), Israeli legislator and head of the far-right "Jewish Power" party, takes part in a protest outside the district court in Jerusalem on Feb. 27, 2022. - AHMAD GHARABLI/AFP via Getty Images

In his popular weekly address broadcast to tens of thousands of followers June 18, Chief Rabbi Yitzhak Yosef made a broadside attack at ultranationalist Knesset member Itamar Ben-Gvir for praying on Jerusalem’s Temple Mount in contravention of the rabbinical ban on Jewish prayer at the site.

“What blasphemy to go against all the true, great men of Israel. Think about it, fool,” he said. “He will tell you that he, too, has rabbis. … Think twice, you cretin. You think your rabbis know better than the greatest rabbis?” Yosef went on to accuse Ben Gvir and rabbis who support him of provocative behavior and disrespect for rabbinical teachings, “going up to the Temple Mount, stirring up trouble and crossing the line of the great men of Israel.” He urged his flock to “steer clear of” Ben Gvir.

Yosef’s injunction comes within a longstanding Jewish debate regarding entry to the Temple Mount. The traditional view, espoused by the ultra-Orthodox and Yosef's father, the late Chief Rabbi Ovadia Yosef, bans visits to the site where the Jewish Temple once stood for fear of inadvertently stepping on the Holy of Holies and desecrating God’s spirit. Others, especially so-called "religious Zionists" like Ben Gvir, whose Jewish Power party merged into the Religious Zionism party, argue that entering the Temple Mount is permissible under certain conditions.

Yosef’s attack stunned many in the Knesset, where aside from his strong nationalist views, Ben Gvir’s conservative stances on issues of state and religion often align with those of the two ultra-Orthodox parties in the legislature, particularly Shas, which Yosef serves as spiritual leader.

The weekly address, begun by Ovadia Yosef, has made many headlines over the years. In his direct and often undiplomatic language, the revered halachic leader takes on those deemed disrespectful of Jewish law and practices. In 2005, for example, he cursed Prime Minister Ariel Sharon, saying, “God will strike him with one blow and he will die. He will sleep and not awake,” for ordering the evacuation of Jewish settlements in Gaza. Yosef later said the comments had been misunderstood.

Judging by the weekly sermon’s popularity and wide reach via the Shas party’s satellite network, Yosef likely considered his words with care. Although usually more circumspect than his father, he let loose this time.

What incurred his wrath? Although his late father ruled against entering the Temple Mount soon after Israel captured the site in 1967, other prominent rabbis have ruled otherwise over the years. In any case, the frequent visits to the site by religious Jews have rarely generated such condemnation.

“There is only one explanation,” a senior Shas figure told Al-Monitor on condition of anonymity. “While the rabbi attacked Ben Gvir for going up to the Mount in violation of Jewish religious law, his intention was different — to prevent Ben Gvir from gaining ground within the ultra-Orthodox community because the power he has amassed, especially among young people, is of great concern to the political leaders of the community.”

The source pointed to another factor that likely influenced the rabbi’s harangue. Shas' leader, former Knesset member Aryeh Deri, was a close aide to the late Yosef and often soothed feathers ruffled by his mentor’s outspoken comments. Deri enjoys a close relationship and mutual respect with his son, too, who is unlikely to have attacked Ben Gvir without the political leader’s okay. “I would even go as far as to say that he was carrying out Deri’s express wishes,” the source added.

Why would Deri make such a request? Because of the upcoming elections likely in early November. Whereas in the past the ultra-Orthodox would rally their voters against real and perceived enemies such as anti-clerical party leaders Yair Lapid and Avigdor Liberman, Ben Gvir’s growing popularity in the ultra-Orthodox community makes him a far greater threat to their influence in the Knesset and government.

Ben Gvir and Religious Zionism party leader Bezalel Smotrich “enjoy great sympathy in the ultra-Orthodox sector due to the extreme views they champion against the left and the Arab sector,” the source explained. The ultra-Orthodox Knesset members are perceived as too willing to compromise on these issues and are even suspected of sympathy for “leftist” views, he added. This perception is particularly pronounced among young people who feel themselves less committed to ultra-Orthodox principles, said the source, who pointed to a significant showing for Smotrich and Ben-Gvir at ultra-Orthodox polling stations in last year’s elections.

Ben Gvir and Smotrich have made inroads with these young constituents by making themselves available to hear their calls and requests. Smotrich, as transportation minister under Netanyahu, publicized his phone number and responded to every caller, whether from a stranded motorist or bus schedule complainant. It earned him many points among those who had previously viewed him with some suspicion for having served in the military and for religious practices considered less strict and devout than their own.

Ben Gvir, too, demonstrated that there was more to him than the radical, often vulgar remarks for which he is famed, responding to requests from ultra-Orthodox constituents frustrated with the seeming indifference of state authorities or even of their own Knesset members. During the recent observance of Lag Ba’Omer, for example, he made sure buses would arrive to pick up passengers who had waited in vain in Jerusalem for a ride to the main ritual site on Mount Meron in northern Israel. “At crunch time, it was Itamar Ben-Gvir who showed up and took care of us, while the Knesset members for whom we voted simply sent out press releases denouncing the bussing holdups,” Yehoshua Cohen, a young ultra-Orthodox man celebrating at Meron, told Al-Monitor.

Ben Gvir and Smotrich are likely to run together in the upcoming elections. With their growing threat to the monopoly of the ultra-Orthodox parties in their voter communities, we will presumably encounter similar attacks against the two Knesset members by ultra-Orthodox lawmakers and ultra-Orthodox media outlets in an effort to stem the erosion of the radical right.