With Trump on way out, Netanyahu nails together settlement legacy

With US President-elect Joe Biden preparing to take office, Israeli Prime Minister Benjamin Netanyahu is rushing to set his settlement achievements in stone. 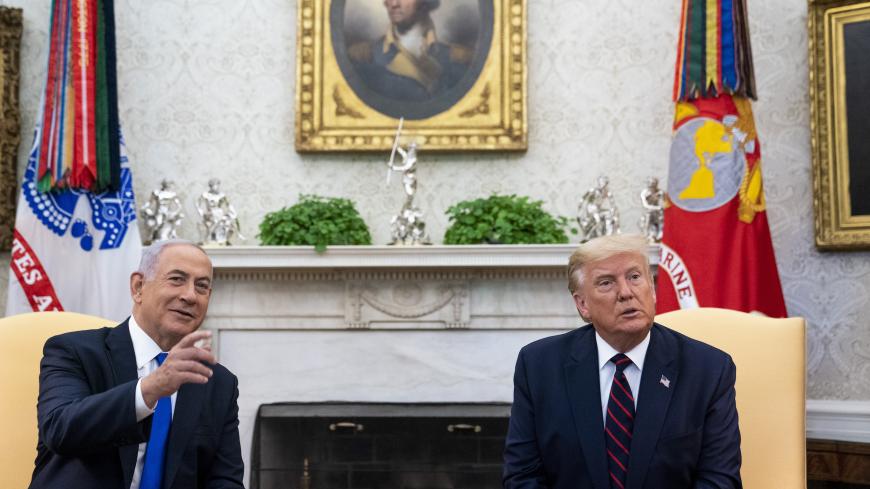 US President Donald Trump and Prime Minister of Israel Benjamin Netanyahu participate in a meeting in the Oval Office of the White House on Sept. 15, 2020, in Washington, DC. - Doug Mills/Getty Images

Prime Minister Benjamin Netanyahu has refrained from publicly declaring Joe Biden the president-elect of the United States. However, he is certainly preparing to face this reality by rushing to create facts on the ground before the changing of the guard in January 2021.

On Nov. 15, the State of Israel published a construction tender for the Givat Hamatos neighborhood in east Jerusalem to build 1,257 housing units on 10 sites.

About 30 years ago, the State of Israel built a neighborhood there for Ethiopian immigrants who lived in caravans. Over time, the hill became a symbol of the right-wing struggle to build beyond the Green Line, as its location enables Israel to cut Palestinian territorial contiguity in east Jerusalem. The neighborhood will make it impossible to create a Palestinian continuum between Jerusalem and Bethlehem, thus jeopardizing the possibility of establishing two states with the joint capital of Jerusalem.

In the last decade, several construction projects on Givat Hamatos have been unveiled, but all were frozen due to opposition by the Barack Obama administration and on the backdrop of international condemnation.

Coalition chairman Miki Zohar celebrated the new tender in a tweet: “Now we can talk about it. Before the last elections, Prime Minister Benjamin Netanyahu promised me that he would publicize the building tender in Jerusalem’s Givat Hamatos; this neighborhood is in a strategic location between Beit Safafa and Hebron road. It important to build there in order to maintain a Jewish land continuum … We have a one-time opportunity these days to strengthen our hold in the land of Israel. I am sure that our friend, President [Donald] Trump, and Prime Minister Netanyahu will be wise enough to take full advantage of this opportunity.”

Zohar was referring to last February, just before the March 2 elections, when Netanyahu visited Givat Hamatos and announced, “We are connecting all the arts of united Jerusalem.” However, the tender was delayed several times.

According to a diplomatic source who talked to Al-Monitor on condition of anonymity, Netanyahu allowed himself to dawdle over the plans so long as he knew that Trump was in office. According to the source, “The situation is different now. From the moment Biden enters the White House, this kind of construction will offend the new administration, which in turn could take revenge. Netanyahu is the first to be updated about Biden’s attitude toward building in the settlements and in east Jerusalem. What he’s doing now is to maximize his achievements until the last minutes of Trump’s presidency in the White House.”

Little wonder, then, that Netanyahu defended the construction tender on Nov. 16, following international criticism from the moment it was publicized on Sunday morning. Netanyahu said, “I’ve been told that very soon a call will be arranged with President — with uh, Joe Biden, who is supposed to be appointed the next president. … We usually update the current administration in Washington on construction plans and they knew about this one as well.’’

Netanyahu chose his words carefully so as not to offend Trump, who still insists he won the election. The administration to which he referred is the current one run by Trump, who still has time to make changes.

That Netanyahu published the tender on the eve of a visit by US Secretary of State Mike Pompeo says it all. Pompeo will not only not denounce the intended construction that will threaten the possibility of dividing Jerusalem as part of a two-state solution, but probably embrace it. Pompeo is also expected to be the first US secretary of state to visit a West Bank settlement and the Golan Heights.

Pompeo’s visit explains Netanyahu’s rapid decision to move ahead with the Givat Hamatos plans in a move that was apparently coordinated with the Trump administration. In an unusually short timeline, the Finance Ministry quickly approved the budget and the Justice Ministry removed all blockages and finalized financial compensation packages with the Palestinian land-owners before ground was broken. The project seems to be part of a larger program to regularize the registration of lands in east Jerusalem, the vast majority of which have not been registered since 1967 in Israel’s national land registry, so technically cannot be built on.

Minister for Jerusalem Affairs Rafi Peretz said in an interview on Monday, “The fact that more than 90% of the land tracts in east Jerusalem are not registered has been an ongoing failure for over 50 years and must be resolved. United Jerusalem is not an empty slogan, but a vision.”

At 71 years of age, Netanyahu faces a criminal trial that has already started and is in a hurry to write the final chapter of his legacy. He is aware that Trump’s four years in office was a stroke of luck and enabled him to make massive changes, including normalization with Arab countries before an agreement with the Palestinians.

And now, Netanyahu has done something he had not dared do since he returned to the rulership in 2009. He faces elections in which he desperately needs votes from the ideological right, many of which have fled to Yamina leader Naftali Bennett. The east Jerusalem-Givat Hamatos project offers him precious credit among the right.

In the next election, my bet is that Netanyahu will arrange to be photographed at Givat Hamatos, shoulder by shoulder with the settlement heads and with the requisite bulldozers in the background, the very picture of victory for the prime minister.