The facts about buying land in Jerusalem's latest settlement

Despite condemnation from the United States and other countries, Israel is forging ahead with its plan to disrupt the Palestinian urban continuum in the Jerusalem area, while preventing the sale of real estate to non-Jews. 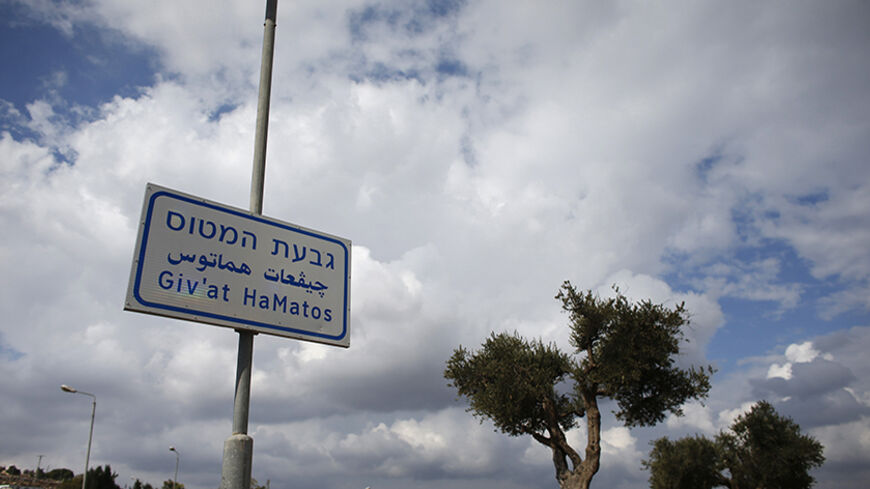 A signpost is seen in Givat Hamatos, a neighborhood on the southern fringes of Jerusalem's city limits where, according to anti-settlement watchdog Peace Now, Israel decided to move forward on a settler housing project. Photo taken Oct. 2, 2014. - REUTERS/Ronen Zvulun

Last week’s events in New York and Jerusalem took me back six years to an isolated farm on the outskirts of Oxford, England. Prime Minister Benjamin Netanyahu's Sept. 29 UN declaration referred to
"new opportunities" for regional peace. His government promoted construction plans in Givat Hamatos, a Jerusalem neighborhood across the Green Line, while the Jewish settlement in the East Jerusalem Arab neighborhood Silwan expanded. The combination reminded me of an Israeli-Arab meeting held in Oxford in October 2008.

For three days, the conference participants debated how to introduce the 2002 Arab Peace Initiative into the political discourse in Israel. The atmosphere was friendly, yet businesslike. The Israelis suggested that the Arab states propose a series of goodwill gestures to Israeli civil society, such as mutual visits by businessmen and journalists in Riyadh and Jerusalem. In other words, give us an advance on the future normalization of relations and we will sell your initiative to the Israeli consumer.

“Interesting idea,” responded one of the Arab representatives, “but we have a modest request: Promise us that when we come to visit you, you will not humiliate us in front of our public by announcing a new settlement in East Jerusalem.” His colleagues nodded in agreement.

Prime Minister Ehud Olmert, who three months earlier had announced he was stepping down, was busy in those days with legal issues, and several months later a right-wing government headed by Prime Minister Benjamin Netanyahu was back in power. Even when Israel agreed to a short settlement construction freeze starting at the end of 2009, Netanyahu refused to apply it to East Jerusalem.

Givat Hamatos is the first planned neighborhood to be built across the Green Line since the construction of the neighborhood of Har Homah in 1997 (during the first Netanyahu administration). It completes the divide between Bethlehem and East Jerusalem and prevents any possibility of a significant diplomatic arrangement regarding the Arab Jerusalem neighborhoods of Beit Tzafafa and Sharafat.

Lt. Col. (res.) Shaul Arieli, who was head of the Peace Administration in the Barak government and one of the formulators of the Geneva Initiative, told Al-Monitor this week, “Givat Hamatos is another stage in the historic Israeli plan to create an urban Jewish ring around Arab Jerusalem and to disrupt the natural Palestinian urban continuum along the mountain top. To the north, the ring cutting off Ramallah from East Jerusalem was completed with the construction of the neighborhood of Ramat Shlomo. Givat Hamatos will do the same thing by bridging over the divide between Har Homah and Giloh.”

According to Arieli, absent any possibility of maintaining a spatial continuum between their future capital and their metropolitan area, the Palestinians will demand that any arrangement for the joint administration of Jerusalem and the granting of special international status to the historic Jerusalem Holy Basin is applied to the whole city. According to all forecasts, this will turn Jerusalem within a decade into a city with an Arab majority and will produce hundreds of flash points, destabilizing the city and threatening the entire arrangement.

In the face of these realities, Netanyahu presents his own “facts” and chastises the US administration for not doing its homework. He says that Givat Hamatos, like the Silwan neighborhood abutting the Old City walls, is an inseparable part of unified Jerusalem and Israel’s sovereign territory. The fact is that Israel is the only country that recognizes the annexation to Jerusalem of 70 square kilometers (27 square miles) of West Bank land captured in June of 1967 and the legality of the Jewish neighborhoods built across the Green Line. Netanyahu also claims, “Arabs in Jerusalem freely buy apartments, and nobody says that is forbidden.” In a meeting with journalists in his New York hotel, the prime minister added, “There must not be discrimination — not of Jews and not of Arabs.”

In an interview with Fusion’s Jorge Ramos, Netanyahu said, “If, in a certain neighborhood in the United States or in Mexico or anywhere else, you would tell a Jew that he couldn’t buy an apartment, there would be an uproar.”

It seems hard to believe that the prime minister of Israel lies knowingly, so it must be that Netanyahu hasn’t studied all the facts. Scandalously, a Jew living in the United States or in Mexico, who has never visited Israel, is entitled to buy a house in the Old City of Jerusalem or in the Jewish Quarter in Hebron. On the other hand, a Palestinian native of Jerusalem is not entitled to buy an apartment in the Har Homah neighborhood and cannot get a title deed to an apartment in Givat Hamatos.

Land in west Jerusalem is not out of bounds for Arab residents of East Jerusalem, since March 2008, and about 280,000 Palestinians there have now access to “national lands”.

And after all is said and done, and even as the world continues to wag its finger at Israel, it’s business as usual for the settlers as they make their way with heads held high from Har Homah to Givat Hamatos, from Sheikh Jarrah to Silwan.

The prime minister's office did not respond to Al-Monitor's query concerning the alleged contradiction between the prime minister's claim that Jews and Arabs are equality entitled to purchase apartments in Jerusalem and the Israel Land Administration's lease contract.