Prime Minister Benjamin Netanyahu believes that Israel is under a constant existential threat and thus perceives those who believe in peace as naive and unrealistic. 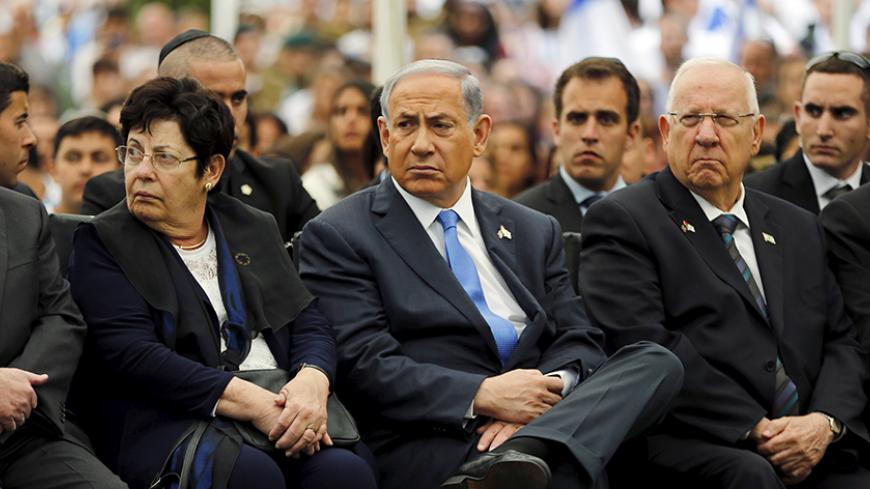 In the aftermath of the March 17 Israeli elections, one can read many assessments about the international community taking steps to isolate the next Benjamin Netanyahu government (especially given the rift between Washington and Jerusalem), and acting in favor of establishing a Palestinian state. Yet it seems that Prime Minister Netanyahu is not terribly concerned about such eventualities; his election hubris has not faded.

A source close to Netanyahu spoke to Al-Monitor about the prime minister's view of his next term. The premier, according to the source, is confident that he can steer Israel away from what he considers dangers — first and foremost the establishment of a Palestinian state. While he understands the depth of the crisis with President Barack Obama — whom he views as a left-wing liberal, naive and weak — he assumes that he will get along better with the next president (possibly from the Bush or Clinton families).

According to the source, Netanyahu plans to discreetly renew the dialogue with the US administration, passing on a message that, regarding the Iran agreement, he will content himself to play a rigorous and critical monitoring role. In parallel, he believes that an American veto on a Palestinian statehood resolution is a given. He trusts Israel's friends in Congress to pressure Obama in this direction.

Indeed, it seems that Netanyahu has a personal disdain for Palestinian President Mahmoud Abbas and believes that he is dependent on Israel for internal security vis-a-vis Hamas and the Palestinian economy. Netanyahu apparently plans to play a divide-and-conquer strategy in the region; he believes that the Arabs are split between fanatic terrorists and weak authoritarian regimes, and that Israel can fight the former and create utilitarian alliances with the latter — be it Egypt or Jordan. The Palestinian problem is, in his eyes, a reflection of the inner Arab power struggle — Israel must fight Hamas while assuring that the vulnerable Abbas depends on it. A future Palestinian state, he estimates, would be taken over by Hamas. As such, a state will instantly become a place where only the language of force is understood. We have seen in the past that predicaments of occupation and human rights occupy little place within his mental lexicon.

According to the source, Netanyahu does not share the settlers' messianic beliefs. Rather, he considers the settlements a tool to prevent a Palestinian state. Therefore, he plans to continue the settlements' systematic and strategic expansion. The prime minister believes that his strategy worked during the previous government term and would be successful with the next one as well.

In terms of Netanyahu’s modus operandi, this source says that the prime minister is very pragmatic, creating ad hoc alliances and spending much of his time formulating his core messages through the Israeli and international media. Above all, he will not risk any measures that could endanger the stability of his rule.

This analysis of the source leads to the following conclusion: Netanyahu will most likely prefer to establish a coalition where he depends only on parties that share his ideological views.

The source claims that vis-a-vis the United States, Netanyahu will continue to work closely with the two most important Jewish organizations: the Conference of Presidents of Major American Jewish Organizations and the American Israel Public Affairs Committee (AIPAC). He strategizes with their leaderships as to how to exert pressure on the administration, and on ways of co-operating with members of Congress, mainly from the Republican Party.

On Iran, Netanyahu believes that Obama is determined to carry the agreement through, and that unless there is a change of heart in Tehran, this will indeed happen. He truly believes that the agreement is of catastrophic significance, especially in terms of future Iranian hegemony in the region, and its military ambitions in Syria, Lebanon, Iraq and the Gulf, and of course vis-a-vis Israel.

As for Europe, Netanyahu considers most European countries anti-Israeli, though with little clout in the international arena. In his view, Europe has not cured itself of its past. Paradoxically, the one EU country on which he relies on is Germany, under the leadership of Angela Merkel. Germany’s perception of the “special relationship” is leveraged by the prime minister inside the EU and in significant defense assistance.

According to the source, the field of communication is actually Netanyahu’s main tool in achieving his aims. He lives in the media world and is a great believer in the importance of formulating and repeating messages that can harness public opinion in Israel and internationally (which to him means the United States) in favor of his positions.

These assessments align with what has been established in the past concerning Netanyahu's worldview. The underlying premise of his view is that Israel's existence is permanently threatened — an inherent part of Jewish destiny — from the era of the ancient Romans to the Nazis, from the Arabs to Iran. His messages focus on this existential threat, constantly present within the larger historical narrative, and define Israel’s military force, and the possible use of it, as the only solution. He plays skillfully on people’s fears and traumas. His political opponents are depicted as weak and naive, if not treacherous.

Clearly, Netanyahu is driven by a historical and political philosophy that he inherited at home. He sees the Jewish people as perpetual victims of anti-Semitic forces, while modern Israel is threatened by the same forces. The only difference, he believes, has been Israel's ability to use force and deter its enemies. Israel cannot alter their hostility by compromise. For him, believing in peace constitutes a naive and unrealistic state of mind.

"At the end of the day," says the source, "one should not be surprised if the doomsday scenarios — be it boycotting Israel according to the left, or an all-out war according to the right — will fall on deaf ears. After all, the Israeli prime minister is a master of the status quo."