What Netanyahu wants from Trump

Prime Minister Benjamin Netanyahu has already started preparing his first meeting with President-elect Donald Trump in order to persuade him to embrace his two-state rejectionist position. 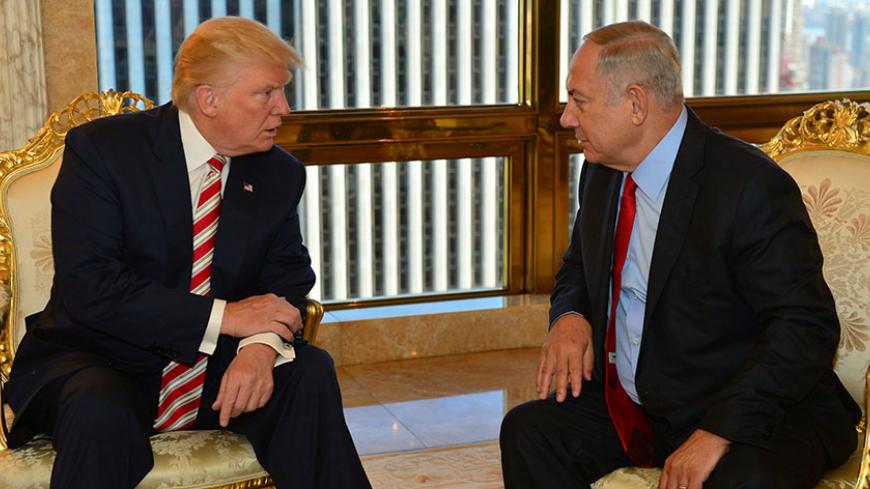 Israeli Prime Minister Benjamin Netanyahu has actively and discretely begun preparing for his first meeting with the next US president. He is counting the days until the end of President Barack Obama’s presidency. Their relationship was in trouble beginning with their first meeting, when Netanyahu tried in vain to convince Obama about the legitimacy of the settlements, to the unprecedented clash between the two leaders when Netanyahu took sides with the Republicans in Congress on the Iran deal.

With President-elect Donald Trump, Netanyahu wants to start out on the right foot during a meeting that could take place at the end of March 2017 when the prime minister speaks at the annual American Israel Public Affairs Committee (AIPAC) conference. He has instructed his diplomatic right-hand man (lawyer Yitzhak Molcho), the Israeli National Security Council and the Foreign Ministry to prepare policy papers for such a meeting in the Oval Office. In addition, the Israeli Embassy in Washington has been talking to Trump’s advisers and with new senators of both parties in order to prepare the encounter.

A senior Israeli Foreign Ministry official dealing with Israel-US relations told Al-Monitor on condition of anonymity that Netanyahu views his first meeting with the next president as critically important. The prime minister is somewhat traumatized by the relationship he had with Obama. He blames it all on the personality of the outgoing president, and he does not perceive this as a result of a fundamental interest clash between the two countries. Netanyahu, said the official, believes he can get along well with Trump.

According to the official, Netanyahu is expected to raise three major issues in his first meeting with Trump.

First, he will present Trump with a geostrategic analysis of the current situation in the Middle East. Netanyahu wishes to remove the resolution of the Palestinian issue from the list of elements necessary for regional stability and convince the new president that fundamentalist terror is the root problem of the region (and for world stability for that matter). Netanyahu will argue that the Islamic State, Hezbollah and Hamas are the real enemies of both Israel and pragmatic Arab countries. Thus, the region should align around the battle against Iranian-sponsored terror, not the Palestinian statehood issue.

The second topic for Netanyahu’s meeting with Trump would be, according to the Israeli side, the Iran deal. The prime minister intends to persuade the new president to cooperate closely with Israel on Iranian compliance with the agreement. He will encourage American deterrence against Iran’s long-range missile development and the sponsoring of regional and international terrorism. American sanctions against Tehran must therefore remain a realistic option, Netanyahu will claim.

Netanyahu’s third issue — the main aim of this meeting as far as the prime minister is concerned — would be preventing American and international pressure on Israel on the following points:

In short, Netanyahu would like the next president to embrace and adopt Israel’s “no” on the Palestinian issue. To him, this will play an important role in securing his domestic position and the stability of his coalition.

In parallel, Netanyahu is preparing to galvanize the organized American Jewish community to his policy aims vis-a-vis the next administration. The Israeli Embassy in Washington, according to the Israeli Foreign Ministry official, is in contact with US Jewish organizations that are able to influence the administration and Congress, primarily the Conference of Presidents of Major American Jewish Organizations and AIPAC. The new US Congress will be the main focus of these organizations in order to spread Netanyahu’s gospel. According to the Foreign Ministry official, unlike during the presidential elections in which the prime minister was sworn to neutrality, in the case of Congress, Netanyahu prefers a Republican-led Senate. He knows that his fallout with Obama and the fight in Congress had a political toll among Democratic members of Congress.

In the new Congress, Netanyahu will make the case for fighting terror first and addressing Palestinians last, support Israel right or wrong and no international pressure on a two-state solution. The prime minister’s office and the Israeli Embassy are preparing for a media blitz to reiterate his view of the Israeli cause.

Netanyahu’s “peace process hands-off” message will probably meet a fertile ideological ground with the new administration. In many ways, Netanyahu and Trump are ideological twins.