At his address to the AIPAC conference, Israeli Prime Minister Benjamin Netanyahu ignored the warning by US President Barack Obama that the continued settlement policy would isolate Israel even further. 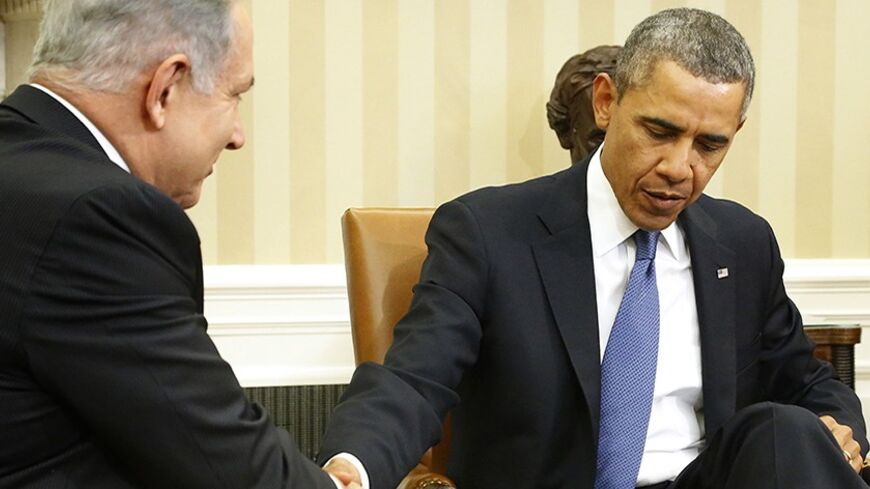 US President Barack Obama (R) shakes hands with Israel's Prime Minister Benjamin Netanyahu as they sit down to meet in the Oval Office of the White House in Washington, March 3, 2014. - REUTERS/Jonathan Ernst

The Israeli right is overjoyed at the opportunity to gloat over the weakness of US President Barack Obama. The Yesha Council, the settlement umbrella organization, says that instead of dabbling with a handful of houses built by Jews in their historical homeland and trying to intimidate Prime Minister Benjamin Netanyahu, Obama would be better demonstrating resolve vis-a-vis Russian President Vladimir Putin, and get him out of the Crimean Peninsula.

This insignificant "triumph" blinds their eyes from viewing the Russian-Ukrainian conflict as yet another warning signal, of what is likely to happen to a binational state whose peoples cannot free themselves from baggage of the past.

In an interview given by Obama to Bloomberg View columnist Jeffrey Goldberg (March 2), Obama acknowledged that, in fact, there was a limit to the power of the man who bears the title "leader of the free world." The United States is no longer willing to jump head first into every gory arena in the world, including the Middle East. That is the meaning of this key sentence in the interview: “If you see no peace deal and continued aggressive settlement construction,” Obama said, “If Palestinians come to believe that the possibility of a contiguous sovereign Palestinian state is no longer within reach, then our ability to manage the international fallout is going to be limited.”

To remove any doubt regarding his meaning, Obama added, “We had to stand up in the Security Council in ways that 20 years ago would have involved far more European support, far more support from other parts of the world when it comes to Israel’s position.” This distinction is most probably connected to what Meretz Party leader Zehava Gal-On heard from Palestinian President Mahmoud Abbas on March 3. Abbas warned the Israeli guest that failure of US Secretary of State John Kerry to cobble together a framework agreement for a permanent agreement, and continued building in the settlement, will leave him with no choice but to turn to the United Nations institutions.

Obama’s words were geared to get a message across to Netanyahu: the US president is sick and tired of fighting on Netanyahu’s behalf vis-a-vis the Europeans and automatically vetoing their proposals condemning the settlements. An Israeli source met with German Chancellor Angela Merkel, and said that the German friend — considered Israel's defensive wall within Europe — told him that Netanyahu's settlement policy evokes great skepticism in her as to the sincerity of his peace policy.

In his interview with Goldberg, Obama rejected the criticism hurled at Kerry by Israeli senior officials after the secretary of state warned of intensification of the boycott against Israel. Israel has become more isolated internationally, Obama said, adding that Kerry ''has been simply stating what observers inside of Israel and outside of Israel recognize.'' Like Kerry, Obama also drew a straight line between the boycott and the settlements. He noted that recent years have seen “more aggressive building in the settlements.”

Israel’s Central Bureau of Statistics (CBS) published its findings for 2013 several hours before Netanyahu’s meeting with Obama. The CBS noted that 2,534 housing units began construction in the settlements (in 2013), an increase of 123% when compared to the year before, and a record number for the recent decade. The data does not include accelerated construction in the outposts.

In a speech he delivered on March 4 to the American Israel Public Affairs Committee (AIPAC), Netanyahu tried to downplay the harshness of the boycott that is spreading mainly in the European continent. He consoled himself with the long arms extended by Israel’s technological branch to Asia and Latin America.

In addition, Netanyahu designated the BDS (Boycott, Divestment and Sanctions) movement as a label that should be treated “exactly as we treat any anti-Semite or bigot.” Netanyahu encouraged the audience to boycott the boycotters, arguing that BDS doesn’t seek a solution with two states, but to eliminate the State of Israel. Thus, he asked to untie the knot created by Obama and Kerry between deepening of the occupation and intensification of sanctions against Israel.

Netanyahu also waxed enthusiastic over the profits that Israel could reap over a peace agreement with the Palestinians, first and foremost establishing formal ties between Israel and leading countries in the Arab world. “Many Arab leaders — and believe me, this is a fact, not a hypothesis, it's a fact — many Arab leaders today already realize that Israel is not their enemy, that peace with the Palestinians would turn our relations with them and with many Arab countries into open and thriving relationships,” Netanyahu said.

However, only a few minutes earlier during the opening of the speech, Netanyahu talked about “Jerusalem, the eternal, undivided capital of Israel and the Jewish people.” How can this announcement be reconciled with the peace declarations of the prime minister? Is there even one Palestinian leader who would sign a permanent agreement with Israel that does not give Palestine sovereignty over East Jerusalem, and provides special arrangements regarding the Old City? Is there one Arab leader who does not view the construction of new Jewish neighborhoods in the Holy Basin as a slap in the face, vis-a-vis the peace initiative of the Arab League?

In the first section of his speech, before condemning the boycott against Israel and calling it a “farce” destined for failure, Netanyahu called for intensifying the sanctions against Iran. He expressed his confidence that this was the most efficacious method for stopping the Iranian nuclear plan. “The greater the pressure on Iran and more credible the threat of force on Iran, the smaller the chance that force will ever have to be used,” Netanyahu ruled. But as Ambassador Seyed Hossein Mousavian wrote on March 3 in Al-Monitor's Iran Pulse, Netanyahu’s words on this issue, as on the settlement issue, have consigned Israel to isolation.

As was written in this column this week, even AIPAC leaders who greeted Netanyahu with loud applause retracted their support for the boycott law. All six members of the forum favor holding negotiations with Iran, preferring to conduct talks in a positive atmosphere and not under threats.

How strange it is that an experienced and astute diplomat such as Netanyahu preaches on behalf of a boycott against a nation that presumably violates international law, without taking into account that by doing so this weapon may become a double-edged sword. Is he taking into account that by doing so he grants legitimacy to those who feel that settlements and occupation violate international law, to use the same weapon against Israel?

Is Netanyahu really unaware that Obama has neither the power nor the will to squander his remaining prestige and his country’s international interests on behalf of a government that portrays the United States as a paper tiger to the entire world?