Prime Minister Benjamin Netanyahu's speech to Congress might be his last major card to play before the March 17 elections, which is why he is determined to deliver it despite objections at home and by AIPAC. 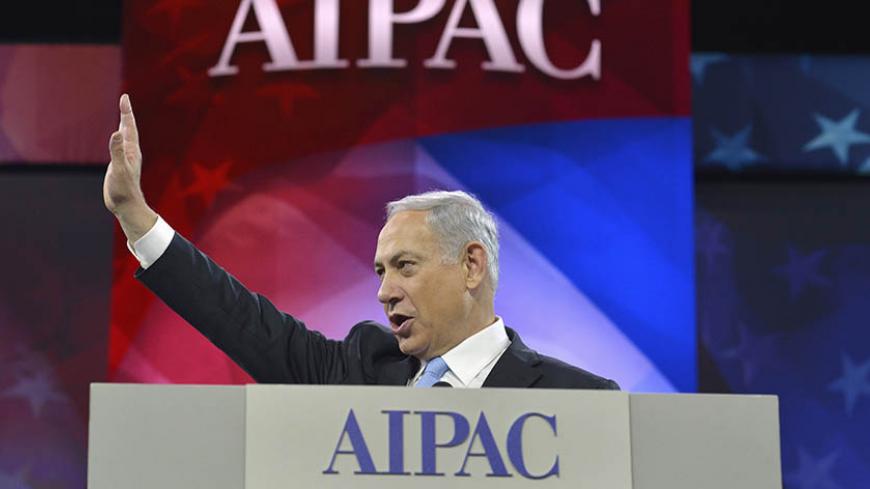 AIPAC, the American Israel Public Affairs Committee, is the Israeli government’s long arm at the center of gravity of American power in Washington. The second most powerful lobby in the United States, AIPAC has served every Israeli government, over dozens of years, with exceptional effectiveness. This efficacy is based on tremendous quantities of American Jewish money donated for the benefit of election campaigns for candidates to the House of Representatives and other elected positions.

The basic, underlying postulate of AIPAC from the day of its inception in 1951 has been simple: to represent and work on behalf of every single Israeli government, without preference for Right or Left. With regard to the US political system, AIPAC sanctifies the principle of bipartisan support for Israel. It will never focus only on one of the two major American parties; it will never try to divide and conquer; and it will never favor a Republican legislator over a Democratic counterpart or the reverse. The secret of Israel’s power in Washington over the years lies mainly in this principle, which has transformed Israel into a form of consensus on Capitol Hill, against which very few dare rebel or deviate from.

The invitation of Prime Minister Benjamin Netanyahu to speak before both houses of Congress March 3 was secretly cooked up by House Speaker John Boehner (Republican) and Israel’s ambassador to Washington, Ron Dermer (who some consider ambassador to Las Vegas because of his relationship with casino mogul Sheldon Adelson). The news struck AIPAC heads like a thunderbolt. They had not been briefed about it before or after. They didn’t know about it, and they didn’t believe such a thing could happen to them. “This is AIPAC’s Day of Atonement,” one of the heads of the organization told me in a private conversation after the invitation was publicized. “This is the lowest point we have ever reached.”

In the first few days after the announcement, AIPAC heads were in shock. They could barely digest what had happened. Since then, over the subsequent weeks, they have been trying to patch things up. There was an internal difference of opinion in AIPAC regarding the actions that the organization should take to minimize the damage. Some thought that they should directly implore Netanyahu to cancel his speech to Congress, to suggest alternatives to him. Such a move, however, would have run counter to AIPAC’s very DNA since AIPAC is Netanyahu’s lobby and not the reverse. On the other hand, almost all the organization’s higher-ups were aware and convinced of the immensity of the damage that Netanyahu’s actions would bring to Israeli-American relations in the medium- and long-terms. It was hard for them to keep silent.

AIPAC prepared a detailed presentation that was given to Netanyahu with all the negative repercussions they believe would result from the controversial invitation to Congress and the cumulative damage. On Feb. 25 behind closed doors, one of the heads of AIPAC said, to paraphrase: All the things we warned him of, are materializing. We foresaw the domino effect that took place, the boycott by more and more Democratic Congress members, the significant deterioration in relations with Democratic legislators, the talks about boycotting the AIPAC convention (that is also being held at the beginning of March) by the administration. We protested, we warned. And who wasn't impressed? Netanyahu. He’s coming.

In anticipation of the speech, the sides have been increasing the stakes on an almost daily basis. First, National Security Advisor Susan Rice said Feb. 24 that Netanyahu’s speech is “destructive to the fabric of the relationship” between the two countries. She added, “The relationship between the US and Israel has always been bipartisan and we have been fortunate that politics have not been injected into this relationship. But what has happened over the last several weeks … is that on both sides there have been injected some degree of partisanship.”

After Rice had her say, next came the turn of Secretary of State John Kerry, one of Netanyahu’s last close friends in Washington. It seems that the Kerry fortress is also falling, and his stinging remarks to Netanyahu were most painful of all. He recalled Netanyahu’s appearance at a hearing before a congressional committee in September 2002 before the invasion of Iraq. “The prime minister, as you will recall, was profoundly forward-leaning and outspoken about the importance of invading Iraq under George W. Bush, and we all know what happened with that decision. He was extremely outspoken about how bad the interim agreement was, during which time he called it the ‘deal of the century for Iran' …​ [H]e may have a judgment that just may not be correct here.” Kerry explained that before the November 2013 interim agreement, Iran’s breakout time for a nuclear bomb was two to three months, and that it has now been extended to a year. He said, “Israel is safer today … than they were before we got that agreement.”​

Simultaneously, a mini tempest broke out when journalist Jeffrey Goldberg published a piece in The Atlantic in which he claimed that Netanyahu’s national security advisor (and former Mossad official), Yossi Cohen, “told at least two people during his visit to Washington last week that he wished the speech were not taking place.” The prime minister’s office in Jerusalem forcefully denied the report and claimed that Cohen does think that the speech is essential. I reckon that the truth is somewhere in between, but leaning in Goldberg’s direction. Cohen is not the only Israeli security official who thinks that the speech is a bad idea, but he conceals his opinion and relegates it to top secret meetings or keeps his thoughts to himself.

Netanyahu did not involve the top echelons of the armed forces in his endeavor to speak before Congress. His position is that it is a diplomatic-political issue and does not concern them. In principle, he is right, but if he had checked, he would have learned that no one in the Israel Defense Forces (IDF), the intelligence unit or Mossad is enthusiastic about his sortie at the United States “over the head” of President Barack Obama. The IDF security branches embody to the greatest extent Israel’s dependence on the alliance with the United States in all domains. This is expressed through defense aid, weapons and ammunition, intelligence cooperation and international backing. In fact, the United States is the most important cornerstone in Israel’s national security, and Netanyahu is undermining this foundation and its stability.

Therefore, it is no wonder that even the new chief of staff, Maj. Gen. Gadi Eizenkot, shares in the less-than-enthusiastic reactions of the other high-level officials around him in the armed forces in regard to the devastation that their boss is wreaking on its important friend, the United States. By the way, Foreign Minister Avigdor Liberman also expressed his opposition to the speech and in closed conversations has said that it will have a damaging effect on relations with the United States.

Top-ranking officials in Israel’s armed forces also do not share Netanyahu’s fatalistic view that Iran is a direct and existential threat. The outgoing chief of staff, Maj. Gen. Benny Gantz, does not think so. His predecessor did not think so. Former Mossad chief Meir Dagan substantively disagrees with Netanyahu on the Iranian nuclear issue, and apparently, the current head of the Mossad feels the same way. Maj. Gen. Gadi Eizenkot, current IDF chief of staff, said in his first speech after his appointment, that Israel’s most important, burning issue is the Palestinian problem.

On the other hand, the one making the decisions, at least until elections on March 17, is Netanyahu. He is resolved to go to Congress. He is resolved to speak. He is well aware of his not-so-great standing in Israeli polls. He knows that public opinion is currently shifting against him. He faces two harsh reports from the state comptroller and a police investigation (potentially a criminal matter) on possible misconduct in the prime minister’s residence in Jerusalem. The only thing he has left is the speech. Bibi will put everything he’s got into this speech.

The assessment is that the speech will include new information, evidently intelligence based, in an effort to somehow influence the views of American legislators and also to somehow reconquer the hearts and minds of Israeli voters.