While preparing early primaries for the Likud Party, Prime Minister Benjamin Netanyahu prefers strengthening his right-wing leader image to seizing a historic opportunity to promote a changed regional order in the Middle East. 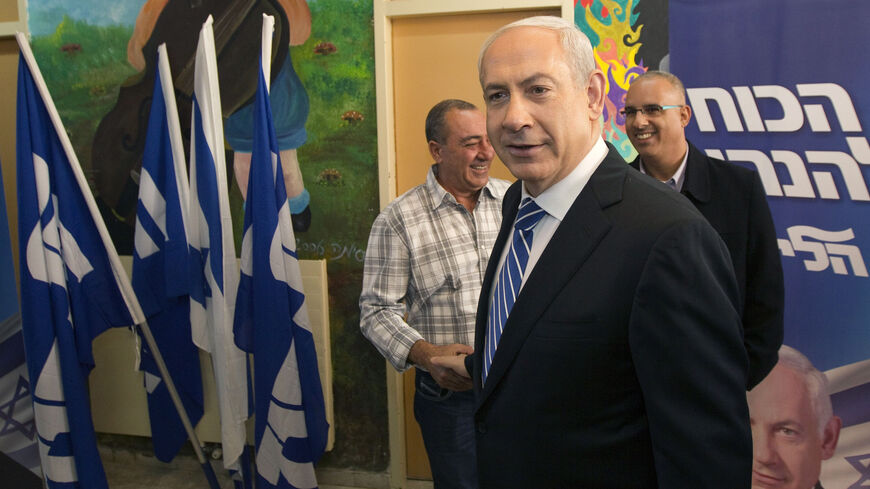 Ever since Israeli Prime Minister Benjamin Netanyahu returned from his trip to the United States on Oct. 3, which ended in another media conflict with the White House, he has been totally immersed in plans for advancing the primaries for Likud Party chief.

Anyone who hoped to see a post-Operation Protective Edge Netanyahu make an effort to lead the regional diplomatic initiative he had alluded to, now discovers that the prime minister is mainly preoccupied with rehabilitating his political position within the Likud and the right. Netanyahu’s recovery plan includes confidence-building measures vis-a-vis his right-wing electorate in the form of promoting construction projects in Jerusalem’s Givat Hamatos neighborhood and land expropriation in the Etzion settlement bloc. As expected, these plans led to unprecedented, harsh reprimands from the Barack Obama administration. However, this is Netanyahu’s way to strengthen his grip on the right, in the struggle vis-a-vis HaBayit HaYehudi Chairman Naftali Bennett and against elements in the Likud’s hard-core right.

Simultaneously, Netanyahu is carrying out his plans for expediting the primaries for the Likud leadership, to take place after the holidays in late October. He is expected to win by a large margin, whether he will be the only candidate or whether he will run against far-right-wingers Knesset members Danny Danon and Moshe Feiglin. In any event, in a few weeks Netanyahu will be re-elected for the nth time as Likud leader, without facing a real fight or a significant rival. In other words, in the upcoming general elections, which according to current assessments are likely to take place at the beginning of 2016, Netanyahu will run for the premiership as the party’s candidate for a fourth term of office.

It seems that Netanyahu and his associates were very much interested in the festive political meeting held on the evening of Oct. 12 by Transportation Minister Yisrael Katz in his sukkah (traditional hut constructed for the Feast of Tabernacles) at the Kfar Achim village. They were much more interested in that gathering than in the international donors' conference for the Gaza Strip's reconstruction that opened that same morning in Cairo, or in the crumbling relations between Israel and the United States.

At the political gathering in which hundreds of Likud members took part, Katz — currently the minister closest to Netanyahu — assessed that the primaries for Likud chief will take place after the Jewish holidays. He also announced that he would support the prime minister in this contest. Katz’s announcement was coordinated with Netanyahu, down to the last detail, as part of a political deal between them: Katz as chairman of the Likud Secretariat would help Netanyahu be re-elected and pass a series of changes in the constitution that would allow the prime minister to coopt new “stars” to the Likud. Katz, on his end, will be rewarded by an upgrade in the coming elections.

Meanwhile, for anyone who was wondering if Netanyahu is secretly consolidating a regional coalition with Arab countries, the answer is no. Such a move cannot take place in light of the continued construction beyond the Green Line and the provocative behavior vis-a-vis the US administration. Netanyahu’s recent actions testify to the fact that he has not yet “crossed the political Rubicon.” Evidently, he is gearing up for the coming elections as leader of the right and not of the political center and soft-right, and not someone intent on committing a historic act.

Netanyahu's priority list was also reflected by the special meeting he convened on Sunday morning in his office in Jerusalem, on the topic of the spread of the Ebola virus. At the end of the discussion, Netanyahu’s office released an announcement to the media describing Israel’s preparations should the first Ebola victim enter Israel’s borders. “The State of Israel is prepared to bar the possible entry of people with Ebola,” Netanyahu was quoted saying in the statement.

And thus, while Egyptian President Abdel Fattah al-Sisi and US Secretary of State John Kerry deliver speeches in Cairo, calling on Netanyahu to jump-start the diplomatic process between Israel and the Palestinians and to renew the Saudi initiative, the prime minister chose to focus on the Ebola danger and refrain from officially addressing any of the diplomatic and regional issues.

As far as Netanyahu is concerned, it is good news that Israel was not invited to the conference. Thus, he was exempt from dealing with the possibility of renewing the negotiations with the Palestinians — negotiations that constitute a headache for him. Netanyahu will also benefit from the fact that Obama and his associates will be busy in the coming weeks with the president's second midterm elections, and the Israeli-Palestinian conflict will not head their priority lists. The Palestinian issue has already been pushed aside due to the concentrated efforts currently directed at the war against the Islamic State (IS). Over the backdrop of the Western mobilization for war against IS and following his own pattern, Netanyahu manages to play for time without external pressure and postpone his moment of truth in the Israeli-Palestinian conflict.

What had seemed only a few weeks ago, at the end of Operation Protective Edge on Aug. 26, to be a historic opportunity for Netanyahu to serve as an important agent in the new regional order, now emerges as an imaginary scenario.

Yes, Netanyahu had talked about new diplomatic opportunities and had created the impression that he intended to sweep the region as a key player in a coalition with Arab countries headed by Egypt. In reality, Netanyahu has remained just the same Netanyahu, and he now squanders the opportunity afforded him by the Protective Edge campaign and his good relationship with Sisi during the war, in light of their joint interests vis-a-vis Hamas.

In an interview with Al-Monitor at the end of Operation Protective Edge, former Minister Dan Meridor was asked if after all the years in which Netanyahu headed the government, did Meridor still believe that the prime minister was headed in the direction of the two-state solution. Meridor answered, “The indicator for this must be whether he starts to take action, and whether he stops construction in settlements beyond the separation fence.”

Meanwhile, it seems that Netanyahu is offering other signs, actually providing a tailwind for construction plans in the occupied territories. Characteristically, Netanyahu blames the left-wing Peace Now movement for his recent bitter conflict with Obama. It was Peace Now that revealed Netanyahu’s advancement of construction plans for about 2,600 housing units in the Givat Hamatos neighborhood, on his way to win over the hearts and minds of the right.