Netanyahu May Push for Early Primaries

According to senior party officials, Netanyahu is considering moving the Likud leadership primaries to early 2014, preparing the political ground for concessions to the Palestinians. 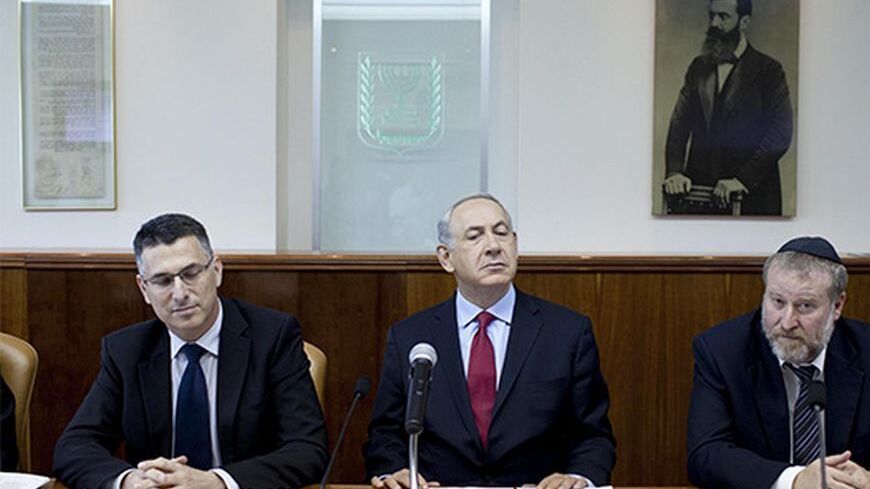 Prime Minister Benjamin Netanyahu is planning to move up the Likud Party's leadership primaries and to hold them in just a few months. That’s what senior party officials claim, despite denials issued by Netanyahu’s office over the last few days.

According to senior Likud officials, Netanyahu would like to hold the primaries in early 2014, preferably January or February. The reason for the move is to establish his status as chairman of the movement and to free himself from the burden of internal party politics, which could weigh him down throughout his tenure as prime minister.

If Netanyahu does move up the primaries, it would be the third time he's employed such a move since 2007, when he surprised rival Silvan Shalom (the current minister for regional development) and announced a flash primary election. Shalom withdrew his candidacy as a result and claimed that Netanyahu was running the Likud like the Baath party in Syria. The second time was in December 2011, right after the deal over abducted Israeli soldier Gilad Shalit, when public support for Netanyahu was at its peak. This ensured him an easy victory with a huge margin over now-Knesset member Moshe Feiglin.

In both those instances, Netanyahu essentially ran against himself, as he faced no significant opponent. He did it at a time when he felt especially strong within the Likud, and took advantage of the opportunity to clear the internal elections from the agenda. This allowed him to focus on national politics and on his responsibilities as prime minister.

Netanyahu has apparently spent the past few weeks thinking about repeating the same pattern. The prime minister is encouraged by recent polls indicating the collapse of his rival claimant to the crown, Finance Minister Yair Lapid, and the relatively high marks the public is giving Netanyahu. He must feel that this is the time to be re-elected head of the Likud and to establish his status as leader of the party in the general elections for the 20th Knesset.

By advancing the Likud elections, the prime minister would declare that even after his third term in office, he has no plans to go anywhere. It would also send a clear message to anyone who considers himself a potential candidate for the party leadership, such as Defense Minister Moshe Ya'alon, Interior Minister Gideon Saar or the chair of Yisrael Beiteinu, Avigdor Liberman, to forget about his plans.

And in fact, Netanyahu really can be assured of his position as leader of the movement. Though his grip on the Likud has faced challenges over the past few years, with the infiltration of groups from the extreme right into the party’s institutions, it remains obvious to everyone that there is no real alternative within the party, as Netanyahu once was to Ariel Sharon when Sharon was prime minister. Even Shalom, who dared to challenge Netanyahu’s leadership in his last term, has fallen in line. It has been a long time since he last mentioned running against Netanyahu in the primaries.

An expression of the sense of tranquility enjoyed by Netanyahu at the highest echelons of his party was visible in the cabinet room on the afternoon of Sunday, Oct. 20, when the ministers and deputy ministers were invited to celebrate his 64th birthday, which was the next day. The room was decorated with colorful balloons, and Netanyahu stood beside his wife, Sara, and his two sons, Yair and Avner, enjoying speeches by Ya'alon and Knesset member Tzachi Hanegbi, both praising him for his leadership. Ya'alon really went out of his way to show his loyalty to the head of the Likud, saying, “We are all privileged to continue benefiting from your vast experience. May you continue to lead Israel forward with stable hands on the wheel of the state.” Those are not the words of someone who is planning to challenge Netanyahu for leadership.

Opposing Netanyahu are senior Likud officials from the party’s ideological right-wing flank. They claim that Netanyahu wants to move up his re-election to lead the movement because he is planning to make concessions in his negotiations with the Palestinians. He is, they say, following a course of “preventative medicine” in the event that his standing in the Likud suffers a blow due to progress in the diplomatic process. According to those same sources, if Netanyahu tries to move the primaries, he may be surprised by the intensity of the opposition he will face, one which might ultimately frustrate his plans.

Netanyahu and his people deny that they have any such intentions, but the Likud leadership is not convinced.

“Netanyahu fell in love with the flash-primaries model,” says one Likud minister. “He simply got used to strange elections for the head of the Likud the last few times, when he ran against Moshe Feiglin. Feiglin has since been elected to the Knesset, so now it is not even sure that he will want to run against Netanyahu. What that means is that Netanyahu could find himself running against himself. That has never happened to us before.”