How Netanyahu is sidelining potential rivals

Israeli Prime Minister Benjamin Netanyahu's trouncing of Transportation Minister Yisrael Katz is one more step toward making the Likud a one-man party with no future. 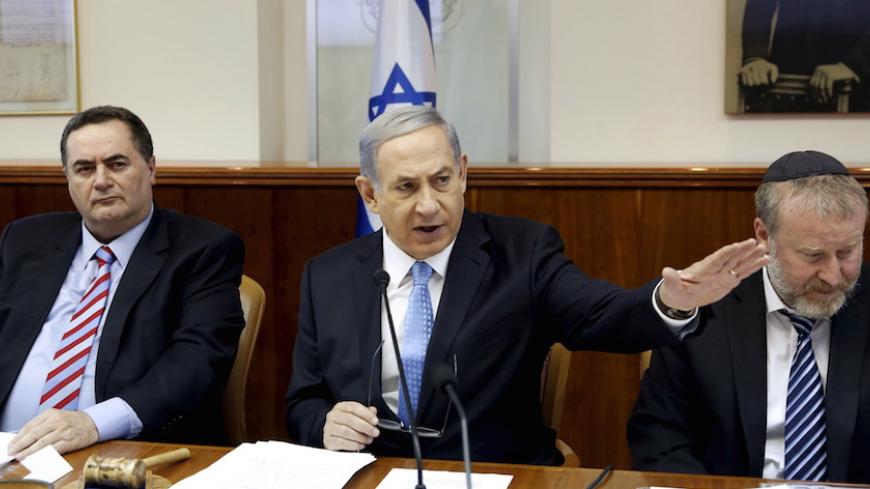 It will take a long time for Transportation Minister Yisrael Katz to recover from the politically humiliating blow from Prime Minister Benjamin Netanyahu Aug. 17. He might never come back entirely from Netanyahu scolding him over the series of resolutions Katz passed at the Likud secretariat, and certainly not as long as the prime minister serves as Likud chairman and prime minister.

While Katz is licking his wounds and attempting to convince the public that the prime minister did not really threaten to fire him, it is highly doubtful that another Likud minister will ever consider leading an oppositional move against Netanyahu. The Likud, a democratic movement known for its pluralism and vigorous internal political discourse, is fast becoming an emasculated party with no potential future leaders. Its leadership reserves have been systematically eliminated or neutralized by the prime minister, and the consequences for the post-Netanyahu era could be devastating for the ruling party.

Therefore, the below-the-belt hit should not be handled as a personal quarrel between the prime minister and his transportation minister, but as an incident with serious ramifications for the Likud movement.

Let us return to the week that Katz would prefer to forget. On Aug. 16, the Likud secretariat officially convened. The secretariat is viewed as the Likud’s strongest institution, and as its head, Katz enjoyed great political power in the party and bargaining power with the prime minister. Katz is also widely appreciated as a proactive transportation minister who gets things done with regard to national enterprises, especially after he initiated the light rail project in Tel Aviv and the paving of the tunnel for the high-speed train between Tel Aviv and Jerusalem.

Katz is a seasoned political player who started out in a Likud student faction at the Hebrew University of Jerusalem. As a young man, Katz served as assistant to then-Housing Minister Ariel Sharon. Eventually, Katz became very close to Netanyahu and was viewed as the latter’s confidante and a kind of informal intra-Likud adviser to him when Netanyahu returned to the premiership in 2009. In short, Katz is a Likud adherent through and through.

Over the last two years, Katz gained popularity among the Israeli public for his successes as transportation minister. As a result, relations between Katz and Netanyahu became increasingly strained. Netanyahu and his wife, Sara, disliked the new status of the senior Likud official who attracted such positive media coverage. An important milestone in this process was the very complimentary report about Katz that was disseminated by Channel 2’s Friday news magazine last December. Katz was even singled out in the program as a future candidate for the premiership. The Netanyahus even saw Katz' weight loss (thanks to bariatric surgery) as threatening and part of a great plot to topple the prime minister.

Thus Katz became a real political threat, at least in their eyes. True, relations between Katz and the prime minister had run aground earlier, but now Netanyahu had “proof.” With the Likud celebrating the electoral achievement of 30 Knesset seats in the March 2015 elections, Katz demanded a senior ministerial post, claiming that he was promised either the treasury or the foreign affairs portfolio. Netanyahu waved aside his demands, and Katz was forced to begin his third tenure as transportation minister. Still, his political aspirations remained.

Katz devised a plan that ultimately failed last week in the Likud secretariat. He convened the body and passed a long list of resolutions designed to undercut Netanyahu’s ability to appoint close associates in the party and authorize internal budgets. The first part of the plan was an impressive success: Katz’ resolutions were passed with a sweeping majority and he rushed to celebrate his victory. Headlines broke the news of Katz’ victory in cutting Netanyahu down to size. His associates boasted of their triumph over Netanyahu. Commentary crowned Katz as the Likud’s strongman.

However, the victory march lasted only a few hours. The very next day, Katz was summoned to Netanyahu’s chambers for a harsh tongue-lashing. According to the prime minister’s associates, he was threatened with dismissal, as Netanyahu treated Katz’ actions as no less than an attempted putsch.

After the meeting, Katz sang a different tune altogether. He was forced to concede defeat and in a marathon of telephone calls canceled all the decisions reached in the secretariat. Katz tried to minimize the damage in the media by claiming that he had not capitulated to Netanyahu. But it is doubtful that anyone in Israel bought Katz’ version of the incident.

The Katz affair was one stage in the process of leeching out of the Likud any political life or future leadership. Katz has been added to an ever-growing list of movement officials who tried to raise their heads and challenge the prime minister, only to find themselves politically beaten or outside the Likud entirely.

The list includes Silvan Shalom, a former foreign affairs minister who — even before he was forced to retire from political life by a sexual harassment scandal — was disappointed to discover after the 2009 elections that he did not receive the Foreign Ministry portfolio as he expected and was also removed from the diplomatic-security Cabinet. After him came the popular Moshe Kahlon, who was removed from Netanyahu’s environs because he had become too popular with the public, until he was forced to quit the Likud in 2012 and establish the Kulanu Party in 2014.

Another person thrown out of the Likud was Gideon Saar, once viewed as a front-runner for the Likud leadership. After winning first place in the Likud primaries of 2012, Saar thought that he deserved the Foreign Ministry slot. Netanyahu disagreed. Instead, he sent Saar to the Interior Ministry and wouldn’t let him near the Cabinet. Eventually, Saar left politics in 2014.

Former Defense Minister Moshe Ya’alon had also been frequently cited as a front-runner for the leadership. But after rubbing Netanyahu the wrong way several times, Ya'alon was deposed from the Defense Ministry in favor of Avigdor Liberman. Then, in May 2016, Ya’alon resigned from the Knesset.

While Katz was not deposed from his government post, he suffered great political damage when he tried to challenge Netanyahu. This clash, together with the general grim picture emerging in the Likud, ought to worry all the party’s members — even those who now gloat over the transportation minister’s downfall.