While negotiations with the Palestinians are underway, Prime Minister Benjamin Netanyahu faces growing distrust and lack of support within his own Likud party. 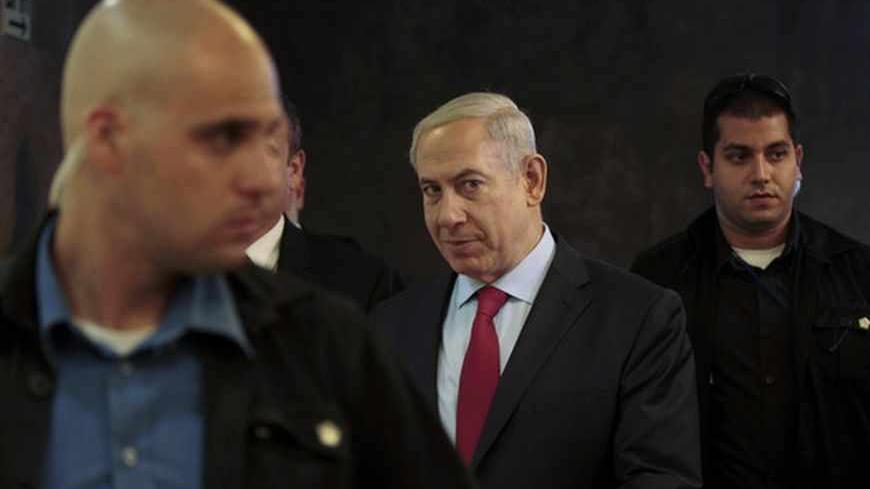 On Monday [Sept. 23], in the late-night hours, Prime Minister Benjamin Netanyahu’s office published a firm response to the shooting in Hebron, in which IDF Givati brigade fighter Staff Sgt. Gal Kobi was killed.

In the announcement, the various media outlets were informed that the prime minister “instructed tonight to take immediate action to allow the Jews to move into Hebron’s Machpelah House.” Later on, Netanyahu was quoted as threatening that “Those who try to uproot us from the city of our fathers will achieve the opposite effect,” and promised that “with one hand we will fight terror and with the other we'll strengthen settlement."

The target audience of this militant notice was Netanyahu’s electorate in the ideological right wing. This is the group that, since renewal of the dialogue with the Palestinians, suspects that Netanyahu has “crossed the Rubicon” on his way to waive parts of the homeland. This group is the hard kernel of Netanyahu’s political base, the core of electors in the far right. In Netanyahu’s belief, this is the group that brought him to lead the government three times, and once to defeat, when he lost to former Prime Minister Ehud Barak in 1999.

In the periods when Netanyahu worked with the American strategic adviser Arthur Finkelstein, the latter always warned him not to relinquish his “base on the right.” Netanyahu adopted this suggestion and treated it, in recent years, as a holy principle. A truism. Even when the political center made overtures to him, as happened after the release of abducted Israeli soldier Gilad Shalit, Netanyahu always returned to the right, in this case via the merger with the former Foreign Minister Avigdor Liberman.

But now, since the renewed startup of the negotiations with the Palestinians under the mediation of American Secretary of State John Kerry, Netanyahu is drawing away from his base. This trend is evident in the internal polls that the prime minister orders. We can also sense it in the scorn displayed by Likud party ministers and Knesset members affiliated with the settlers, toward the prime minister. They warn him of the repercussions of the diplomatic process and the destructive results of the release of terrorists.

But it is highly doubtful that Netanyahu’s late-night statement on the heels of the killing of the soldier in Hebron, and the hug he sent to the settlers, will change the downward trend of Netanyahu’s power in the right.

On the eve of the opening of the Knesset’s winter session, Netanyahu’s position is such that although no one threatens his leadership, his political power within his party is weakened. Netanyahu can only blame himself for this because it is the direct result of his conduct, ever since he was re-elected in January 2012 to head again the Likud. Netanyahu has distanced himself systematically from all party politics, kept his distance from Likud party headquarters and political conventions, thus abandoning the Likud institutions to those with vested interests and to the settlers. Afterward, he lost the Likud’s Central Committee chair to the darling of the far right, Deputy Defense Minister Danny Danon, thus in effect losing all control over the party. Nowadays Netanyahu is a prime minister who lacks any kind of grip over his home, and this has a direct effect on the way that the Likud faction members relate to him.

Danon is a salient example of the phenomenon. Netanyahu appointed him to the role of deputy defense minister with the hopes of earning a temporary state of peace and quiet on the part of the settlers’ lobbyist in the Likud faction. Netanyahu was granted exactly three months of grace, until Danon embarrassed him in front of the entire world. In an interview he granted to the Times of Israel at the beginning of June, at the same time that the diplomatic process was renewed after three years of stagnation, Danon said that the Israeli government is not committed to the two-state solution and that Netanyahu only renewed the process because he knows that an agreement will never be reached with the Palestinians. This caused Netanyahu great embarrassment and discomfiture because Danon serves as deputy defense minister, thus the world viewed his words as expressing an official position.

On that very day, there were those who advised Netanyahu to fire Danon, and told him things along the line of, “You don’t exist in his eyes, and he causes you damage.” But Netanyahu chose to restrain himself. In the opinion of one of the senior Likud officials this was a terrible mistake, a harbinger of things to come. Knesset members witnessed how Danon got away with it, thus all barriers broke open. According to one official, “Such a thing would never have occurred with [former Prime Minister] Arik Sharon. He would have pounded on the table and on that very day, Danny Danon would have been fired from the defense ministry. Arik radiated power, and Netanyahu radiates laxity.” That same Danon published an article this week [Sept. 20] in The New York Times, in which he called to put an end to the farce and annul the Oslo accords.

Another example of contempt for Netanyahu in his own party is the attitude of coalition chairman Knesset member Yariv Levin; the latter is also part of the Knesset Members' group affiliated with the settlers. Levin is supposed to give political backing to Netanyahu, but he does this with a grain of salt and takes care to elucidate that the moment in which he’ll conclude that Netanyahu departs from the path of the Likud and betrays the settlement enterprise – that is the moment he will disappear from sight. In an interview with Al-Monitor this week [Sept. 23], Levin said that he assumed that Netanyahu would not be able to continue to serve as prime minister if he moves toward a diplomatic process. This is a harsh statement, a kind of implied threat on Netanyahu, who hopes to return to the prime minister’s chambers for a fourth time.

Even Knesset member Ofir Akunis, deputy minister at the Prime Minister's Office, who is viewed as Netanyahu’s close associate, announces at every opportunity that he will vote against a diplomatic agreement that opposes the path of the Likud.

But not only Danon, Levin and Akunis turn their backs on Netanyahu. Eight ministers, including high-level ones like Economy and Trade Minister Naftali Bennett and Transportation Minister Yisrael Katz, have reiterated in recent days their demand to void the government’s decision to release Palestinian prisoners, due to the killing of the soldier in Hebron and the murder of Sgt. Tomer Hazan in Qalqilya last week [Sept. 20]. Twenty-four Knesset members already signed a petition calling on Netanyahu to reconsider the release. Meanwhile, background noise within the coalition commonly features scornful comments against Palestinian Chairman Abu Mazen and his lack of relevance. And all this, at the same time that the Israeli government is conducting negotiations with him.

In the light of all this, it is very noticeable that none of the Likud ministers or Knesset members have taken Netanyahu’s side on a single issue. This, too, is an indication of the prime minister’s diminishing power. With such a built-in weakness within the Likud party, it will be interesting to see how far Netanyahu succeeds in advancing in the diplomatic process.