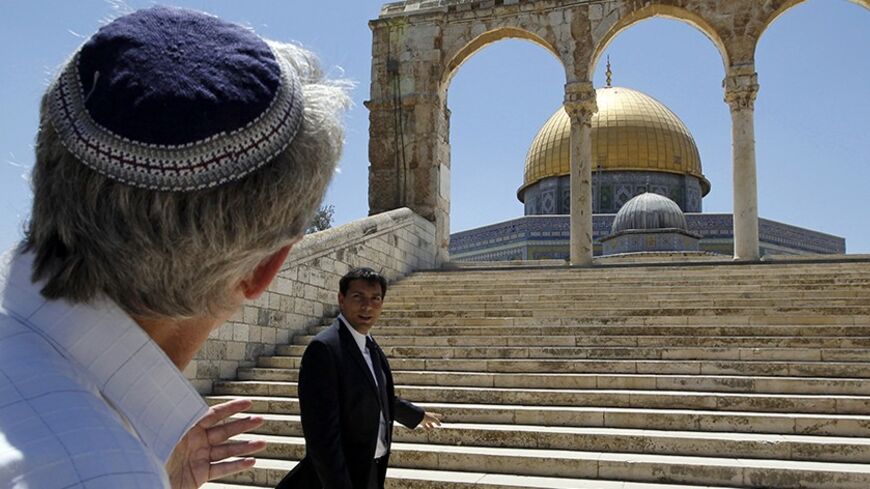 Israeli lawmaker Danny Danon (R) stands in front of the Dome of the Rock on the compound known to Muslims as Haram al-Sharif and to Jews as Temple Mount, in Jerusalem's Old City, July 20, 2010. - REUTERS/Ammar Awad

Next week, on March 31, Prime Minister Benjamin Netanyahu will find out whether he finally has lost control of the Likud Party to Danny Danon and the settlers.

Members of the party’s central committee will gather at the convention center in Tel Aviv to decide between two proposals: one by Netanyahu, and the other by Deputy Minister of Defense Danny Danon. The proposal submitted by Danon, who also serves as chairman of the Likud central committee, includes a few clauses that are intended to significantly increase his authority in the faction. Among other things, the proposal would empower him to summon the party’s central committee more frequently and to make decisions within the committee that would restrict Netanyahu in diplomatic negotiations. Netanyahu will try to prevent the inevitable by offering a counterproposal that will restore his authority over the party.

As far as Netanyahu is concerned, the very fact that such a fight is taking place is humiliating. He is in his third term as prime minister, having won the trust of the Israeli public yet again just one year ago. Nevertheless, he is being dragged before his party’s central committee by order of the court, at the demand of a relatively new Knesset member, the darling of extreme right-wing groups that want to limit the ability of the prime minister to make major diplomatic decisions.

Netanyahu will arrive at the event beaten up and weakened inside his own faction, with several embarrassing defeats already inflicted upon him. In contrast, Danon will arrive as a winner. He already succeeded in dragging the prime minister before the central committee against his will and in turning the event into a face-off in which the prime minister has no advantage over him. The situation is almost unprecedented in the history of the Likud.

While the internal battle within the ruling party has failed to break its way into the media agenda, its implications for Netanyahu and the Likud Party should not be understated. A victory for Danon is a victory for the settlers. It would constitute a clear threat to senior party members, warning them not to back the diplomatic process being led by Netanyahu. As such, Monday’s battle is also a clash over the diplomatic process itself, right before the release of the Kerry document.

Danon describes it as a close fight. He may be exaggerating, but what is certain is that the prime minister feels pressured. He also is fully aware that a defeat on Monday will turn him into a prime minister without a party.

Netanyahu himself created this situation by abandoning party activity for years and going so far as to deride it. This allowed the far right to infiltrate the Likud’s official institutions en masse and upset the delicate internal balances that characterized the faction.

Netanyahu was characteristically late in recognizing that Danon had set a trap for him, and has been spending the past two weeks in a struggle to impede it. First, he was quick to recruit to his troops an energetic new political adviser named Kobi Tzoref, and then he went out into the field in an effort to reconnect with Likud Party members. During this time, Netanyahu has met and spoken with hundreds of members of the central committee, who were brought to his home or with whom Tzoref arranged a phone call.

At the same time, a packed schedule of political gatherings was put together for the chairman of the Likud throughout the country. On March 25, he skipped between the cities of Rehovot to Beersheba to attend gatherings of party activists. Anyone familiar with Netanyahu’s meager party involvement over the years and his actual physical revulsion from having any contact with central committee members must realize that something important has changed. The prime minister is hugging and kissing and taking selfies with anyone who asks. No one is more charming than he in those round-the-clock phone calls to central committee members. He asks them about their wives, their mothers and their kids. He has cleared almost all of his schedule for this political activity, leaving only security discussions and essential meetings intact. In effect, when it comes to showering party members with affection, Netanyahu has become a kind of Danny Danon.

Netanyahu’s renewed efforts to storm the Likud are also an indication that he has no intention of leaving the party. The hints he scattered about lately about the possibility of splitting the party just as late Prime Minister Ariel Sharon did have been lost in the fury of the current battle. Netanyahu wants to run as part of the Likud in the next elections.

As part of this battle to impede the vote, Netanyahu also sent a threat through his close associates that he is considering firing Danon from the government. That happened after Danon himself threatened to resign as deputy minister of defense if Israel releases additional Palestinian prisoners in the framework of its talks with the Palestinian Authority.

This tumultuous battle with the prime minister only serves to strengthen Danon. He was interviewed by Al-Monitor on the evening of March 25 while he was on his way to meet party activists in the northern town of Carmiel. He sounded amused when he heard that Netanyahu was so worried about him that he went to meet party activists in Rehovot and Beersheba that same day. “Bibi is really sweating,” Danon joked. “He’s already called hundreds of members of the central committee, and they are all asking him, ‘Why now?’”

Al-Monitor:  You’ve become a headache to him. Aren’t your worried that he’ll fire you?

Danon:  No, and if he does, it will only strengthen me. But I’m really not thinking about that. I am fighting to bring the faction back to life. That means that on Monday there will be an ideological discussion about Kerry’s outline and the consolidation [of the Likud Party] with Yisrael Beitenu. I also plan to propose a change to the party’s constitution so that the central committee can meet more frequently without needing his approval. Maybe he thought I’d be more like [former Minister of Communications Moshe] Kahlon, who kept absorbing blow after blow while he was chairman of the central committee. Besides, I already told him myself that if he keeps releasing terrorists from prison, I will resign. Bibi [Netanyahu] wanted me to act like Kahlon and put the faction to sleep, but that is not going to happen.

Al-Monitor:  Don't you have any problem with embarrassing and humiliating the prime minister, the head of your own faction? After all, he appointed you to the very respectable position of deputy defense minister. He must have thought that by doing this, he’d buy himself some quiet.

Danon:  With all due respect to the prime minister, I came in fifth in the primaries, and I am serving the faction. I was elected on my own to head the central committee, and I want this body to go back having an impact on diplomatic and political issues. Bibi silenced the movement intentionally, because it allowed him greater freedom of action. If the movement is silenced, then he has freedom of action. If the central committee becomes active again, it would limit the room he has to maneuver.

Al-Monitor:  Do you think he’s planning to make progress in the negotiations with the Palestinians?

Danon:  I don’t know if he has anything up his sleeve, but when the faction is alive and kicking, it limits his ability to make any moves without consulting first, and it requires him to be much more transparent. Take the Kerry outline for example. I assume that the Likud’s position will be to oppose it, therefore it is important for me to make it perfectly clear that the Likud is against it even before the document is released. Kerry’s outline is the Meretz Party platform. It is not the platform of the Likud.

Al-Monitor:  What do you think reminded Netanyahu all of a sudden to fight you?

Danon:  In my opinion, he already considered leaving the party. Now that he realizes that there is not going to be any major diplomatic breakthrough any time soon, he is scurrying back to the party and announcing, “I’m still here.” What I am saying is that the Likud is not the [Yesh Atid] party of [Finance Minister] Yair Lapid, where everybody stands at attention as soon as he asks for it. There are various forces at action, and there are forces that support my positions. For years, Bibi kept himself removed from what is happening in the faction. Now he wants to come back with full force and tell everyone that he’s staying, that he’s not going anywhere. So we are going to tell him that we are here, too. I am not waging some personal battle against him. I take care to respect him.

What happened to Bibi was that the Likud did not like a lot of the decisions that he made. It gnawed away at his standing within the party. Take, for example, the National Unity government with [former Defense Minister] Shaul Mofaz or the consolidation with Yisrael Beitenu Party and the government with Yair Lapid. There were all sorts of things that Likud supporters found inappropriate.

Al-Monitor:  So what you are actually saying is, “We will keep the prime minister in line in view of the American pressure.”

Danon:  Yes. It’s true that Kerry’s outline seems quite unlikely, at least now, but let’s assume that there is some change on the Palestinian side and the outline becomes feasible. In the event that happens, I am saying that there is no way the Likud will participate in such a process. The Likud will not go there, to the 1967 borders and the repartition of Jerusalem. He [Netanyahu] can go there, but that is too far.

Al-Monitor:  The chances of Netanyahu winning are increasing from minute to minute. He is the prime minister, after all. That has a lot of influence on the party activists. He brought the Likud to power in three separate elections.

Danon:  That’s right, but so far he’s been working harder than me.

Danon sounds somewhat smug and self-confident these days. Perhaps it is because he realizes that even if he loses in Monday’s battle with Netanyahu, he’s already won the political support of the settlers.