Palestinians have given up on negotiating directly with Israel, so they are developing other options like a UN resolution and multilateral talks. 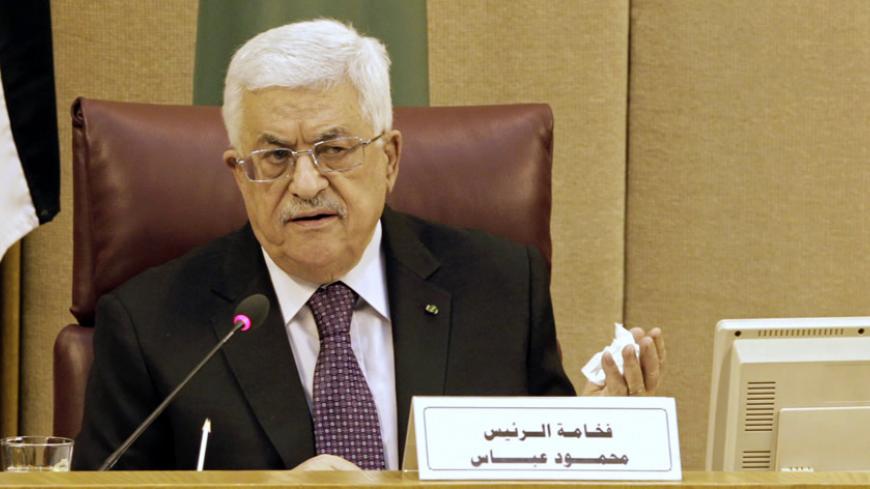 On a freezing January morning in Ramallah, a senior Palestinian Authority (PA) official spoke to Al-Monitor on condition of anonymity about the policy thinking amid Palestinian President Mahmoud Abbas’ entourage: “Our decision to advance resolutions on Palestinian statehood at the Security Council and to join international covenants and organizations is not a reactive step to the stalemate in the peace process. It is a watershed decision in our strategy toward statehood. For 21 years we held negotiations with various Israeli governments, always under American auspices. We have learned from experience that such negotiations will not bring about the state we aspire for; the one we deserve according to the international community's stance and law. Israel always finds either a political excuse of internal opposition to the government or a security excuse, such as insisting on 100% security control over every potential danger, present or future. If we keep to that path, we would have to wait a hundred years for statehood. The era of negotiations is over.”

He continued with a lengthy and furious monologue, giving examples of excessive Israeli security demands, which he attributed to Israel's occupation policy and its mentality: “Negotiations for Israel have become occupation by other means.”

The Ramallah source explained that one of the main reasons for this turnaround was Palestinian public opinion: “Palestinians have zero trust in a negotiated settlement; they are tired of the daily humiliation that accompanies the occupation and the lack of freedom. Many of them, even moderates, espouse the route of violence, of Hamas.”

Abbas continues to oppose violence or intifada. He believes in an aggressive diplomatic campaign in the international arena, counting on the apparent global consensus in favor of a Palestinian state on the basis of the 1967 lines.

Seemingly, the Palestinians coordinate their moves mainly with Egyptian President Abdel Fattah al-Sisi and the Arab League. Several options for conflict resolution and statehood have come up in the talks between the PA and its Arab partners. According to the Ramallah source, there are three main diplomatic options that are actually being considered.

The first option would be a UN Security Council resolution, which could be binding, on a Palestinian state, with the 1967 lines as a basis for the border and East Jerusalem as capital. This resolution will include international security arrangements and a timeline for negotiations on the details of implementation. In such a scenario, the Arab side would be susceptible to certain compromises, so that an US veto is avoided.

A second option on the Arab partners' table is a Madrid II conference under the auspices of the United States, Russia, the European Union and the UN. The framework will be based on the US terms of reference outlined by Secretary of State John Kerry that will include the same stipulations as the proposed Security Council resolution. The 2002 Arab Peace Initiative would also be presented as a basis for such a framework. The conference, with the US terms of reference, will provide an umbrella for two tracks of talks. Both tracks will periodically report to the conference.

The first track will be an Israeli-Palestinian one, toward a permanent status agreement. The second will be a multilateral track, with Israel, Palestine, Egypt, Jordan, Saudi Arabia and Morocco. It will enable the sides to discuss issues of common concern, in areas of economics, regional security, environment, water and refugees. This track would also explore normalizing Arab countries' ties with Israel, as outlined in the Arab Peace Initiative.

The Palestinians and their partners are also considering the option of a P5+1 formula (including the five permanent Security Council members plus Germany). According to this proposal, the same group that negotiates with Iran would negotiate with Israel and Palestine over the outline of a permanent status agreement based on the Oslo Accord. The pragmatic Arab states and the Arab League would be invited to discuss regional peace and economic cooperation.

The PA source said that whatever framework is chosen, the Palestinians are committed to seek deep involvement on the part of international leaders in a future conflict resolution effort. According to him, that will be the case irrespective of the Israeli election results.

Commenting to Al-Monitor on those proposals, a senior State Department source maintained that until the establishment of the next Israeli government Washington would refrain from taking positions on future peacemaking. The election results could affect Washington’s position. The source complained about the Palestinian unilateral initiatives: “We understand their frustration, but the Palestinians would be better off consulting us first and taking our positions more into account. They know that in principle we agree with them on the border and settlement issues, yet we do not agree on other issues. This is the time to strategize together.”

On March 18, Israel will not only wake up to a new political setup, but also to a new regional and international reality regarding the future of peace and the two-state solution.

Prime Minister Benjamin Netanyahu is deaf to these noises — he competes mainly against Economy and Trade Minister Naftali Bennett's HaBayit HaYehudi party. The scene of the two men at the French memorial parade Jan. 11 reflected both the competition between them and their united, shared message: A Palestine state would be a terror state, and therefore the two-state solution is out of the question.