With Prime Minister Benjamin Netanyahu's electoral win, the Palestinians fear that they have no option left but a nonviolent intifada under the theme of liberating East Jerusalem. 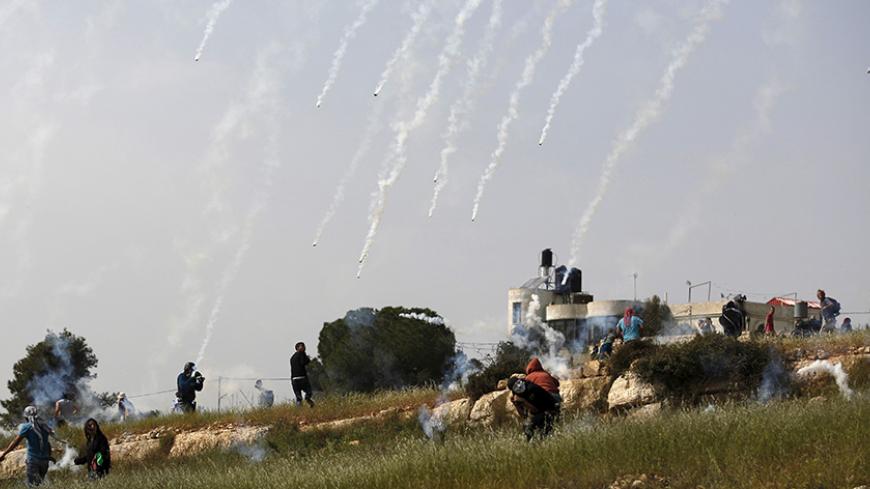 The mood in Ramallah is one of doom and gloom after the Israeli elections. In the words of a senior Palestinian Authority official, “If before the elections some of us thought the problem was [Prime Minister Benjamin] Netanyahu, now we all know the problem is Israel itself.” In his opinion and those of other Ramallah-based senior officials who spoke to Al-Monitor on condition of anonymity, “The peace process is now formally dead.”

A high-level Palestinian security official who asked his name be withheld told Al-Monitor that the new situation — without any Israeli peace partner and without any US ability to enforce a process — leaves the Palestinians with little alternative. The only option at their disposal now is a nonviolent intifada, probably under the theme of liberating East Jerusalem, that according to him may turn violent depending on the Israel Defense Forces' reaction. It may include Hamas and Islamic Jihad, as all these factions sense that they have little to lose. “This must become our war of independence,” the official said, “coupled with diplomatic activities to assure statehood along the 1967 lines.”

One sort of diplomatic activity, which he coined “diplomatic intifada,” would be of a unilateral nature, focusing on the International Criminal Court (ICC) in The Hague. The accusations against Israel on settlement construction and war crimes could be filed with the ICC as soon as April. The other kind of diplomatic activity revolves around a possible UN Security Council resolution. Ramallah, according to this source, is coordinating with Egypt and France on a two-year timeline of implementation, leading to an independent Palestinian state based on the 1967 lines, with East Jerusalem as its capital, mutual land swaps, security arrangements and a reference to the Arab Peace Initiative.

While France is preoccupied with the UN resolution proposal, the US administration is taking a different stance. A senior State Department official spoke to Al-Monitor on condition of anonymity about the trends in the US administration following the Israeli elections. These thoughts are influenced by several factors: The first and principle factor is that the president himself is the main policy decision-maker on the Israeli-Palestinian issue, consulting regularly with his national security adviser and the secretary of state.

He said Washington feels that the peace process as we've known it since the Oslo Accord is over. Thus, there is no more common basis for the parties to negotiate from. In addition, Netanyahu is not perceived anymore as a viable and credible partner for peace and has shaken his relationship with the Obama administration.

He emphasized that one must add the need to confront Islamic extremism and fundamentalism by an international and regional coalition, both through force and diplomacy. Progress on the Palestinian issue is of importance in maintaining cooperation with the relatively moderate Sunni axis of Egypt, Jordan and Saudi Arabia.

Another factor is the perception of Palestinian President Mahmoud Abbas. Washington regards him with some skepticism over his ability to implement an effective peace policy, yet he is viewed as the most pragmatic alternative among the Palestinian leadership. Still, there is concern that with a diplomatic vacuum, Palestinian-Israeli violence may erupt in the form of a terror intifada or in the Gaza Strip.

The United States, in the new situation after the Israeli elections, will maintain close coordination on the issue with the United Kingdom, France and Germany. Based on these premises, the US source detailed three policy options currently considered by the Obama administration.

The first option is to publicize a US policy document outlining the proposed framework agreement of Secretary of State John Kerry from April 2014. It refers to a two-state solution based on the 1967 lines, with mutual land swaps, security arrangements at the borders and along the Jordan River with temporary Israeli military presence, the Jerusalem area as a shared capital, no right of return, recognition of Israel as a Jewish nation-state and a reference to the Saudi peace proposal.

Alternatively, the United States would advance a similar text as a UN Security Council resolution in coordination with the European Union.

The third possibility would be to allow France to propose its Security Council resolution draft, and not to cast a veto.

The significance of those new positions, according to the State Department source, is not just to leave an Obama legacy for the Middle East. They aim to create a US policy platform for the parties to address, as well as avoid another cycle of violence. The United States is also addressing the interests of the moderate Sunni countries of Egypt, Jordan and Saudi Arabia. Israeli interests will be addressed strongly, in the context of a two-state solution, mainly in the security area. Obama has not given up on seeing a peace process begin before the end of his term.

Asked about these US positions, the Palestinian security source in Ramallah said that they reflect yet another effort to gain stability without making progress on the issue of Palestinian statehood, a situation that “will leave us no alternative but to engage in a popular uprising.”

The Netanyahu government is very concerned with the US stance. The prime minister will manage the Israeli policy on the Palestinian issue as a one-man show. Hence, in the upcoming government, we can again expect anti-Palestinian demagogy, some positive noise toward Washington and more settlements.