Palestinian President Mahmoud Abbas plans to shift from his traditional pragmatism and present hard-line positions in his speech at the upcoming UN General Assembly meeting. 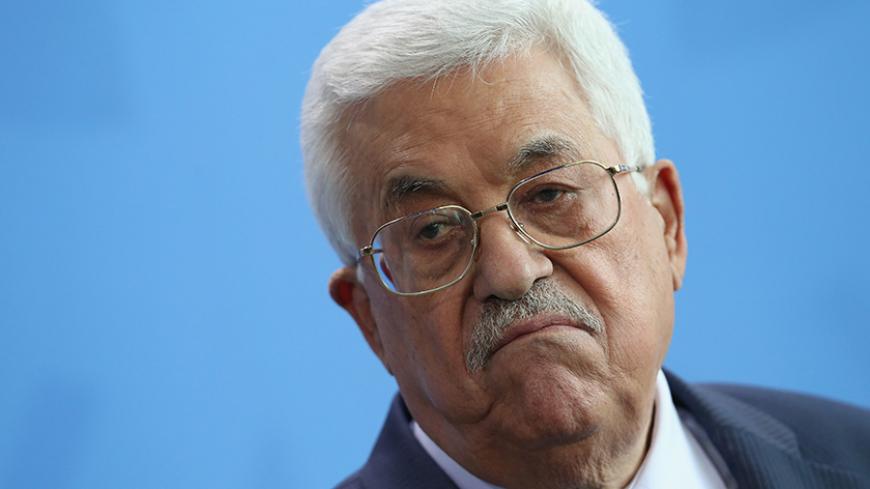 Palestinian President Mahmoud Abbas intends to declare more hard-line Palestinian national positions on all permanent status issues at this month’s UN General Assembly meeting as well as at a meeting of the Arab League, Al-Monitor has learned from a senior PLO official. He will shift from more traditional pragmatic positions — such as those expressed by the Palestinians during the Oslo process, in talks with former Prime Minister Ehud Olmert and in talks last year with US Secretary of State John Kerry. These more nationalistic positions come in response to what Ramallah perceives as extreme right-wing Israeli policies and activities in the West Bank, especially regarding settlement expansion and economic annexation in Area C. Abbas is expected to characterize Israel's policies as “ethnic cleansing and war crimes.”

The official stated that PLO policy planners are currently drafting national Palestinian positions for a two-state solution that reflect the mainstream of Palestinian public opinion.

These positions will include five main points. The first is a two-state solution along the 1967 lines with East Jerusalem as a capital, with only minor and equal territorial swaps. The second concerns security arrangements for both sides, guaranteed by international monitors. No Israeli military presence in the West Bank will be tolerated. The third element mentioned by the PLO official was the establishment of a family reunion program in sovereign Israel for 100,000 Palestinian refugees, to fulfill the principle of the right of return. Another important element is international compensation to all Palestinian refugees. And finally, there is the issue of Israeli-Palestinian security and diplomatic cooperation, which must be developed strictly on the basis of the 2002 Arab Peace Initiative.

The PLO official claimed that Palestinian public opinion research shows broad support for such positions. In a poll conducted by the Palestinian Center for Policy and Survey Research in both the West Bank and Gaza on Aug. 22, 51% of Palestinians were in favor of a two-state solution. Around 40% supported a compromise along the lines of this plan. Abbas will base his speeches on these findings and positions.

On the Israeli side, hard-line Palestinian positions and international disinterest in a peace process are welcomed, as these factors will make it easier for official Israel to reject the Palestinians' conditions. A senior Israeli Ministry of Foreign Affairs Research Center official told Al-Monitor on condition of anonymity that Israeli diplomacy has succeeded under the personal guidance of Prime Minister Benjamin Netanyahu in preventing any major international pressure for a two-state solution and even for a settlement-construction freeze. He said, “Policy is not a popularity contest. What counts is that we were able to place the main onus on the Palestinian side for the deadlock in the peace process.”

The Israeli official said that Israel is aware of the Palestinian policy plans, which are “totally unacceptable.”

The border issue will be decided only after all security and anti-terror arrangements are agreed upon, prioritizing Israeli settlement blocs and security interests. Israel will refuse any right of return, as well as a Palestinian capital in East Jerusalem.

Both sides are preparing to present unrealistic positions. The Palestinians will adopt an unrealistic stance to impress upon the international community that they are not giving into Israeli pressures on the ground, and Israel will do the same to continue its settlement and occupation policies.

Still, both sides have an alternative: to return to the agreements that they have signed together, the Oslo Accord of 1993 and 1995. According to the agreements, several parameters must be agreed upon.

One of the most important is that Israel must, even before permanent status talks, begin to turn over parts of Area C (under full Israeli control) to Area B (under Palestinian civil control and joint Israeli-Palestinian security control). The Oslo agreement does not stipulate how much of the West Bank territory under full Israeli control will be handed over to Palestinian civil control, but the understanding between the two parties was that the vast majority of the West Bank would be under the (civil) jurisdiction of the Palestinian Authority.

Another essential parameter is that in the permanent status talks, all issues — Jerusalem, settlements, borders, refugees and security — must be dealt with simultaneously.

The issue of a Palestinian state is alluded to in the agreement, granting the Palestinians their political rights.

The Oslo Accord refers to all the West Bank and Gaza as one territorial unit. This should be the scope of territory of the future Palestinian independent state, while allowing negotiated territorial swaps.

In addition, Israel has the full right to insist on rigid security arrangements, but without disrupting Palestinian sovereignty. Oslo emphasized the importance of both security and economic cooperation, which must be part of a successful two-state solution and anti-terror policy.

The Oslo Accord also refers to regional cooperation, and especially to Egypt and Jordan.

Finally, but no less important, the Oslo Accord is based on mutual recognition.

The avoidance of the parties from the difficult decisions that are clearly detailed in their signed agreements is undoubtedly the root of today’s crisis.