Late Israeli President Shimon Peres never gave up on peace, even during the last few years of his life when he developed an initiative for a two-state solution. 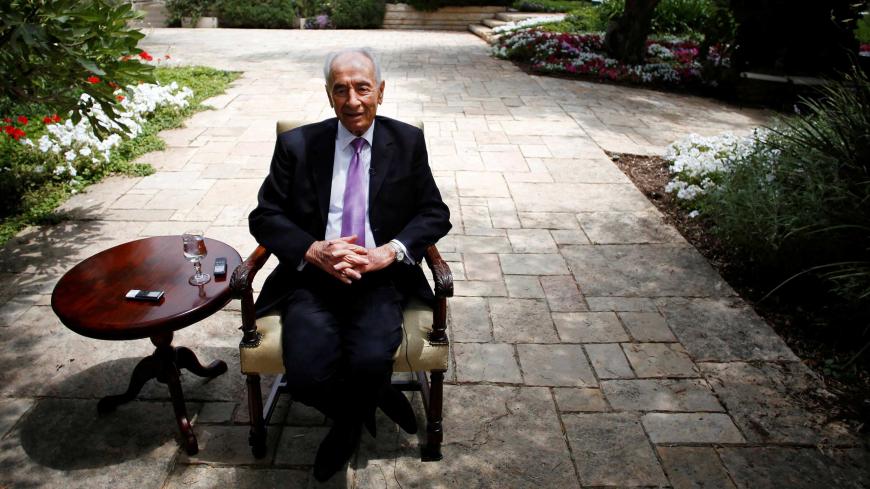 Then-President Shimon Peres speaks during an interview with Reuters at his residence in Jerusalem, June 16, 2013. - REUTERS/Baz Ratner

Former Israeli President Shimon Peres passed away a year ago on Sept. 28, 2016. His friends testify that in his late years Peres was concerned yet optimistic.

Concerned, as he was worried for Israel. He became especially worried with the establishment of the current Netanyahu government, with its policy of settlement expansion, and the right wing’s onslaught on Israel’s democratic institutions. These factors, he felt, had generated Israel’s unprecedented international isolation. He had lost trust in Prime Minister Benjamin Netanyahu’s intentions regarding a two-state solution.

Optimistic, because Peres believed in the fortitude and resourcefulness of the next generation of Israelis to bring Israel back to the path of peace and democracy based on its 1948 declaration of independence.

Peres was in fact a determined optimist, marveling in Israel’s birth — the rebirth of the Jewish nation — and the development of its deterrence power, of which he was an architect. He was convinced that Israel was strong enough to make the necessary concessions to achieve peace with the Arab countries and to reach an agreement on a two-state solution with the Palestinians.

Peres thought that Israel, in its dramatic nation-building process, had achieved everything its founders set out to achieve: a modern army, a flourishing technology-based economy, the integration of immigrating diaspora Jews into Israeli society and the revival of the Hebrew language. All these goals were achieved, except for peace, which, to Peres, was necessary to sustain and build on Israel’s achievements. The key to peace, in his mind, was to share the land between the Mediterranean and the Jordan River between two states, Israel and Palestine. Peres dedicated himself fully to that goal in the last 25 years of his life.

He was convinced that Israel was strong enough to make the necessary concessions to … reach an agreement on a two-state solution with the Palestinians.

After the failure of US Secretary of State John Kerry’s peace mission in 2014, Peres began to work feverishly on his own formula for a two-state solution. In the last two years of his life he shared with me the personal talks he had with former US President Barack Obama and Palestinian President Mahmoud Abbas on his views of a two-state solution. He shared some of these views also with Prime Minister Netanyahu, who was naturally less than enthusiastic about them.

Even before the Kerry mission, during 2013, Peres held talks with the Saudi court on the two-state solution. In the framework of this dialogue, Peres accepted in principle the 2002 Arab Peace Initiative as a basis for future negotiations. Yet Peres also wanted an Israeli initiative. He believed that Israel had to initiate peace, as it was the stronger side. Israel also had the clout, in his view, to convince the Arab side to come to terms on this, despite the violent opposition on both sides.

The initiative developed by Peres was based on several principles.

The first principle was that the framework of negotiations would be the P5+1 formula, which was used in the world powers' negotiations with Iran, for instance. He wanted the five permanent UN Security Council members and Germany on board for both Israeli-Palestinian negotiations and regional negotiations on economic and anti-terror cooperation.

The second principle was that the future Palestinian state would have the precise size of the territory of the West Bank and the Gaza Strip, with mutually agreed land swaps that would hand over West Bank settlement blocs in the Jerusalem area to Israel. That would account for 80% of the settlers, with the other settlers to be moved into these blocs.

Then there was the security aspect. He believed security arrangements should be based on US Gen. John Allen’s security plan that was presented to Israel in 2014. This plan offered state of the art intelligence monitoring and a temporary Israeli military presence along the Jordan River (without annexing the Jordan Valley). In parallel, Peres foresaw joint Israeli-Palestinian-Jordanian anti-terror cooperation along the Jordan River.

The Gaza Strip, according to the plan, would become part of a Palestinian state after the disarming of Hamas.

Peres objected to the Palestinian right of return to sovereign Israel. He diverted such a return to the new Palestinian state, accompanied by international compensation.

Other important components of the plan included diplomatic relations and people-to-people relations. Peres believed that the sustainability of Israeli-Palestinian peace would depend on the relationships and cooperation between the two societies. Therefore, he planned joint ventures in tourism and trade zones along the new borders and the Dead Sea; joint technology ventures with Palestinian companies and ministries; and interconnectivity between youths on both sides, mainly through sports, the internet and online education.

He concluded his plan with the principle of two embassies — one Israeli, one Palestinian — established in Jerusalem.

Peres conditioned an Israeli-Palestinian peace on the gradual normalization of relations as well as regional cooperation between Israel and most Arab countries. The time line for negotiations would encompass three years (with a framework agreement after the first year) and another three years for implementation. He was convinced that such an Israeli initiative was realistic and would find Palestinian and Arab partners, as well as full international support.

Peres believed that such a solution, ending both the Israeli occupation of the Palestinians and the Arab rejection of Israel, was the only path to move toward guaranteeing Israel’s identity as a Jewish democracy, its long-term security and its place among the nations. Much like his mentor, Israel’s first Prime Minister David Ben-Gurion, this great man believed that for Israel, its moral high ground was also the basis of its future power.